Siddharth Suryanarayan is an Indian actor, Screenwriter, Producer, and Playback singer. He mainly works in the Hindi, Tamil, Telugu, Malayalam film industries. He was born on 17th April 1979 at Chennai, Tamil Nadu, India. His debut movie name is Kannathil Muthamittal. 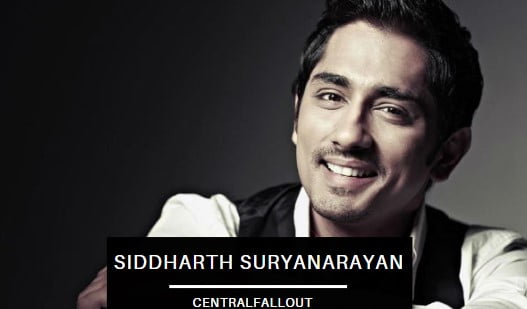 After studying business management, Siddharth worked as Mani Ratnam’s assistant before making his acting debut in S. Shankar’s Tamil film Boys (2003). The film’s success led to a role in Mani Ratnam’s multi-starrer Aayutha Ezhuthu (2004), before he found success in Telugu and Hindi with Nuvvostanante Nenoddantana (2005), Rang De Basanti and Bommarillu (2006).

In the late 2000s, he established himself as a bankable main actor in Telugu films and became more selective with his choices. He won recognition for his work as a carrom player in Striker (2010) and as a blind warrior in Anaganaga O Dheerudu (2011).

In 2011, he returned to Tamil films and produced Balaji Mohan’s Kadhalil Sodhappuvadhu Yeppadi (2012). The actor had a prolific year in 2014, gaining critical accolades and box office success for Jigarthanda and Kaaviya Thalaivan. After that, he appeared in Aranmanai 2 by Sundar C. (2016). Then he appeared in Murali Gopy’s Kammara Sambhavam (2018). In 2019, he acted in two Tamil films: Sivappu Manjal Pachai and Aruvam.

Some facts about Actor Siddharth

Q. Who is Siddharth suryanarayan wife?

Q. Does Siddharth have kids?

A. Siddharth Said, “Yes, I have a son, but he has four legs and a crooked tail.

Q. Why did Siddharth get divorce?

A. According to sources, Siddharth’s closeness with another actress was one of the reasons the two grew apart.