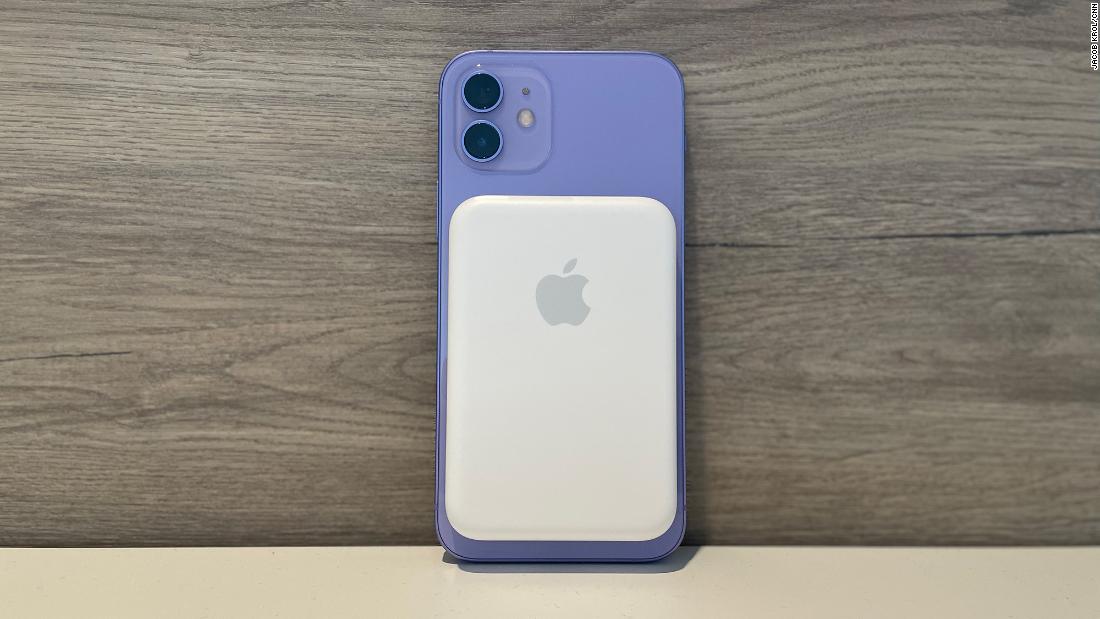 The common truth with phones is that as the design gets thinner, the battery life shrinks. The iPhone 12 family is no different — 12 Mini, 12, 12 Pro and 12 Pro Max included — and on intense days with FaceTimes, lots of typing and some gaming it causes that battery percentage to drop. And that’s where the $99 MagSafe Battery Pack comes in.

We’ve spent the past four hours with the latest Apple-made accessory for the iPhone 12 family. As the name suggests, this battery pack contains magnets and snaps to the back of your iPhone. While we’re still testing exactly how much power it can deliver, the pack will extend the battery life of your iPhone 12 Mini, 12, 12 Pro or 12 Pro Max. It instantly begins charging once attached and deeply integrates with iOS to let you easily see battery levels.

The magnet provides a fairly strong connection that we haven’t been able to knock off by waving our phone around or by sliding in and out of our skinny jeans. Yes, we still wear skinny jeans and yes, an iPhone still fits in our front pocket with the MagSafe Battery Pack attached.

And while previous Apple-made battery solutions for the iPhone wrap around the device in the form of a case, the MagSafe Battery Pack just snaps to the back. It’s less bulky than third-party battery cases for the iPhone 12, but still delivers a hump on the back. Apple has also ditched their signature soft silicone material for a hard plastic. The MagSafe Battery Pack isn’t necessarily soft or extremely hard to the touch on the back — it’s made of a soft plastic.

In classic Apple fashion, it comes in just one color — white — and features a gray Apple logo centered at the top. In fact, it replaces the covered Apple logo on the back of your iPhone. It snaps to the back with relative ease and at times a soft thud.

The bottom of the MagSafe Battery Pack features a lightning port and a single LED indicator that lets you know when it’s charging. You won’t find a lightning cable included in the box, though you’ll need one to charge the battery pack. Here’s the best lightning cable of 2021.

Attaching the MagSafe Battery Pack to the iPhone 12 triggers an on-screen UX element. Similar to what happens when you attach a MagSafe wallet or case, it flashes a graphic and the battery level of the pack. The battery indicator in the top-right corner of iOS will glow green when it starts to receive power. It will begin to charge the iPhone and keep it as close to 100% as possible.

When the iPhone 12 is plugged into power, it will charge the MagSafe Battery Pack through reverse wireless charging. It’s similar to how the Pixel 5 or a Samsung Galaxy can charge a pair of earbuds or another Qi-enabled device off the back. This charging feature is a pretty neat bonus, and it doesn’t generate a crazy amount of heat.

Similarly, just having the MagSafe Battery Pack attached to the back of the iPhone 12 Mini, 12, 12 Pro or 12 Pro Max doesn’t generate a tremendous amount of heat either. It’s similar to the level of warmth that a Smart Battery Case delivers.

We also haven’t yet seen how much power or battery life the MagSafe Battery Pack can add to an iPhone. The rear of the battery pack reveals the cell inside: a 1,460mAh (11.3Wh). Both numbers relate to total capacity, but the Wh is actually close to that of an iPhone 12 or 12 Pro, so we’d imagine it’s not a small 1,460mAh cell inside but potentially two of them. Apple’s charge rate here is faster than alternatives from Anker ($45.99; amazon.com) or Hyper ($39.99; hypershop.com), which feature bigger cells and a cheaper price tag.

Like previous Smart Battery Cases, it’s all about the convenience here — not the size of the battery. For $99, you get much larger batteries for less, but they don’t snap to the back of your phone in an instant or integrate with iOS. You can monitor the battery life of the pack right in a widget and the iPhone can push power to the MagSafe.

We’ve also only spent about four hours with the MagSafe Battery Pack, so it’s safe to say we’ll be doing some more testing. But if you want a purpose-built battery that doesn’t add much weight and brings a ton of function, we’d say the $99 MagSafe Battery Pack fits the bill.

Opinion | How to Raise a Happy Family When You’re Homeless

From fake love angle to fake praises, 7 reasons why Indian Idol 12 is...

America (finally) gets an industrial strategy

How Abdi Abdirahman, the oldest US runner to make the Olympics, weathered setbacks to...