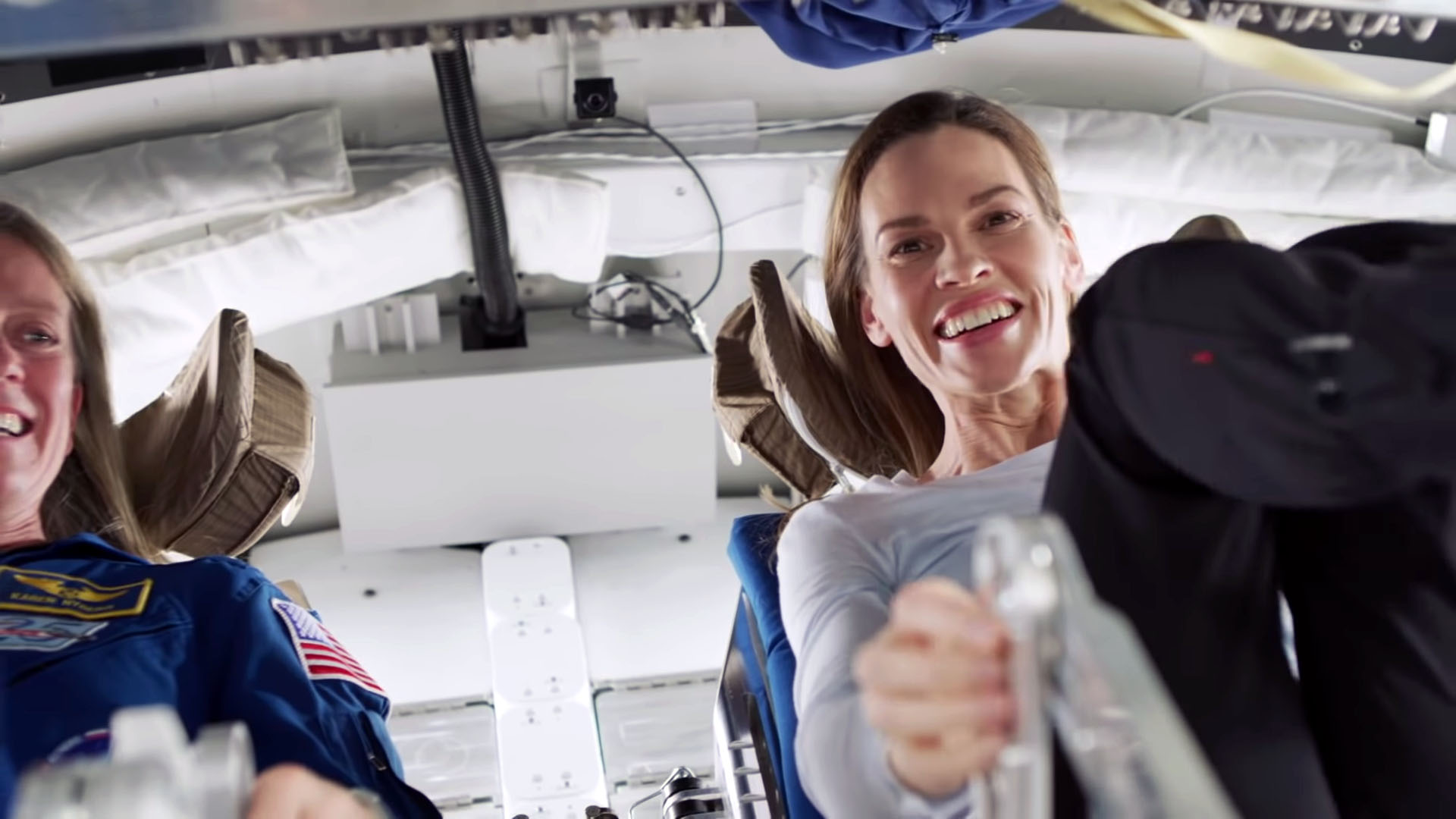 Academy-award winner Hilary Swank visited NASA’s mission control in preparation for her role as an astronaut in Netflix’s new space series “Away.”

In the series, Swank plays American astronaut Emma Green, the commander of the first crewed expedition to Mars. The show, which began streaming Sept. 4, captures the challenges of long-duration spaceflight as well as the emotional struggles astronauts experience while separated from their families and Earth.

Swank visited NASA’s Johnson Space Center (JSC) in February to meet NASA astronauts Karen Nyberg and Jessica Meir, who were working on the International Space Station (ISS) at the time. Swank was able to have a live, space-to-ground video chat with Meir from JSC in which she asked Meir questions about being a real-life astronaut.

Related: Hilary Swank takes us toWant to try Netflix? You can get a 30-day free trial now Mars in Netflix’s ‘Away’ and tensions run high (review)

Hilary Swank plays an astronaut in Away so we decided to bring her to NASA in February to meet some real ones pic.twitter.com/Xma2yQrm4jSeptember 9, 2020

“It’s so incredible to be here, and to see you up there. I’m quite emotional. Believe it or not, I wanted to be an astronaut at five years old — I just play one,” Swank said to Meir in the video. “I’m just so gobsmacked, quite frankly, that I am speaking to you — I feel like I’m dreaming.”

“I know, I feel that way a lot up here too so you’re in good company,” replied Meir, who returned to Earth on April 17 after spending 205 days on the space station.

Swank asked Meir about her favorite part of being an astronaut as she floated weightlessly, upside-down on the orbiting lab.

“It really does turn you into a bit of a five-year-old — no matter what time of day it is … you might just end up just doing a little spin because you can,” Meir said, adding “I think that one of my favorite things as part of this mission has been the spacewalks that we’ve been fortunate enough to do.”

In “Away,” Swank had to perform a number of dangerous spacewalks, including one to fix one of the spacecraft’s three solar arrays which didn’t deploy properly, limiting the Mars-bound craft’s power supply and threatening the success of the mission. Over the course of Meir’s time on the space station, the crew performed nine spacewalks during a four-month period, which is a lot more than normal, according to the video. (She also participated in the first all-woman spacewalk.)

At the end of their chat, the pair took a photo together, during which Swank did a cartwheel across mission control while Meir floated weightlessly on the video screen in the background. After the astronaut got back from her mission in April in the middle of the novel coronavirus pandemic, Swank and Meir reunited for a video chat. The two discussed what it was like to experience the pandemic unfold across the world from space and how it feels to return to Earth.

After visiting mission control, Nyberg took Swank on a tour of Johnson Space Center, showing her progress photos of the space station being built, the countermeasures lab with exercise equipment that the astronauts use in space, the space vehicle mockup facility and space station replica, the space food systems lab (where Swank got to taste-test a packaged space meal) and the Orion spacecraft, which is designed to take astronauts into space beyond Earth orbit on missions to the moon or Mars.

Like Swank’s character in “Away,” Nyberg is married to a fellow astronaut, whom she met during training in NASA’s astronaut class of 2000, and the pair have a child together. Her husband, Doug Hurley, served as commander on Demo-2, the historic, first crewed flight of the SpaceX Crew Dragon spacecraft, which launched in May and ended Aug. 2, 2020 with a successful splashdown in the Gulf of Mexico.

In “Away,” Swank’s character had to leave behind her teen daughter and husband for three years to embark on a mission to Mars. The show captured the struggles the family endures as well as the emotional impact Cmdr. Green faces while navigating being a mom from space. In turn, Swank and Nyberg talked about how female astronauts are asked about being a mom and leaving their child behind during missions more often than their male counterparts — even though the majority of men who have flown on long-duration missions are fathers, too, Nyberg said in the video.

“Showing up at NASA was a dream come true — something I always wanted to experience,” Swank said in the video. “I wanted to be an astronaut. This is extraordinary, I was emotional when I walked in. The exploration that is being accomplished and what’s happening in the future … it seems surreal.”