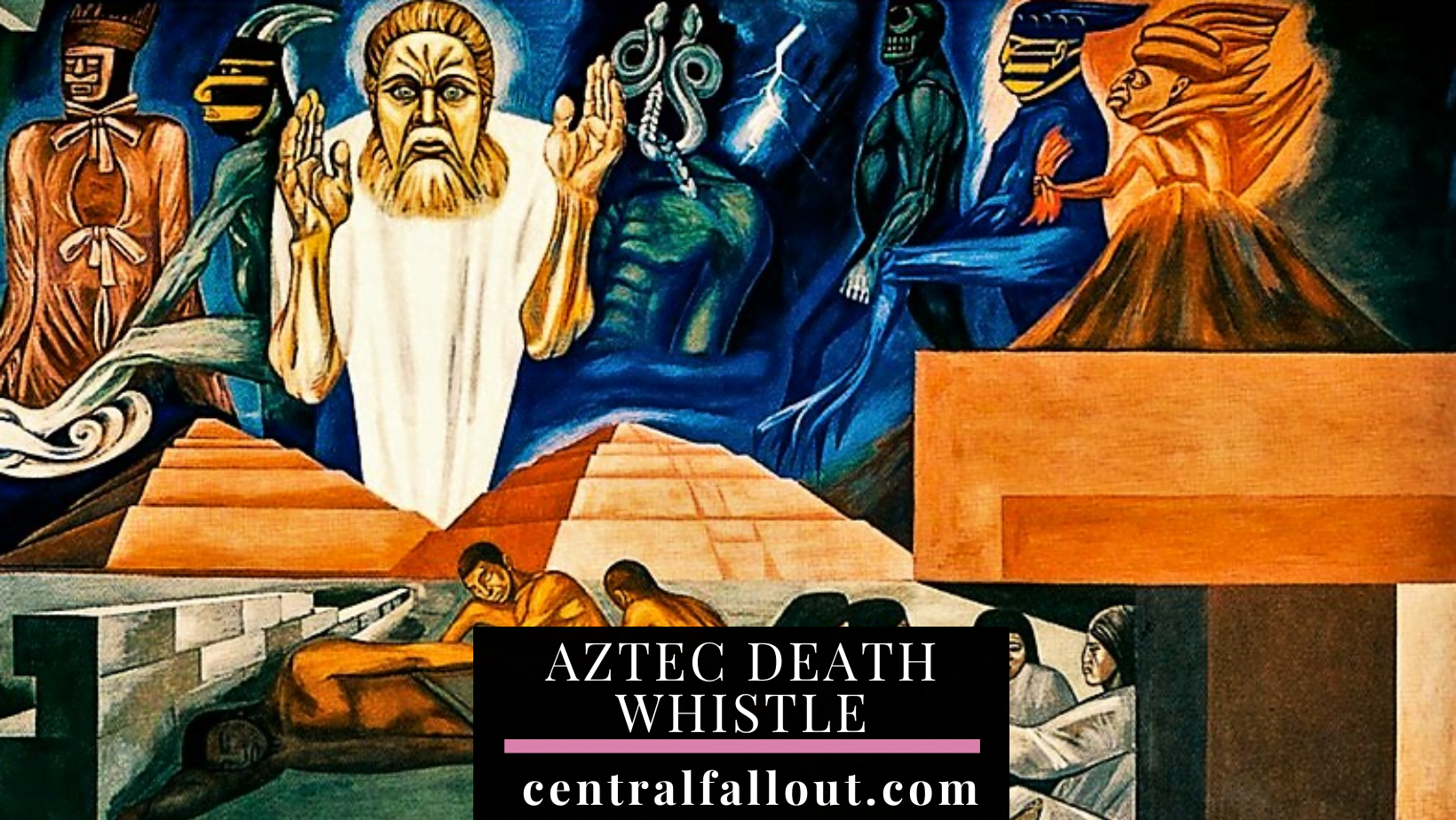 Aztec Death Whistle: made a huge variety of things that make noise and make music. They made sounds with clay, sugar cane, turkey feathers, ores, frog skins, and a lot of other things. The Aztec death whistle was the most startling of these sounds.

They used conch shells for ceremonies ocarinas to make animal noises to attract deer, and flutes for traditional music entertainment.

Think about getting ready for war and getting ready to fight your enemy. You hear hundreds of horses running towards you from behind that hill, and then you hear the screaming…

All you can think of is a huge army of dead people screaming at the top of their weak lungs. Skeletons, zombies, and all kinds of otherworldly creatures are letting out their scariest war cries and are ready to wipe out your army in the next 30 seconds.

That’s what the Death Whistle did for the Ancient Aztecs. You thought you were fighting ordinary people like you, but then you heard the screams of a thousand dead people. Think it’s not as scary as it sounds? Look at this short video:

He says in the video that these were used for Day of the Dead celebrations and other ceremonies, but their real purpose was psychological warfare to shake up the opposing military force before battle.

When hundreds of warriors played these instruments at once, it would send shivers down the spines of their enemies who didn’t know what was coming.

Death Whistle of the Aztecs Found

When these skull-shaped whistles were first found by archaeologists in 1999, almost 20 years ago, they didn’t think much of them because no one seemed to bother to talk to real Ancient Aztecs

They thought they were toys or decorations and didn’t think they were important or unusual. Studies were quickly written and filed away about their shape, size, resemblance to skulls, and the hole put on top of them.

Someone finally thought to blow through the hole, and now historians and musicians are interested in these “mere toys.”

They were found in the hands of the skeleton of a man who had been killed as a sacrifice at an Aztec temple to the wind god Ehecatl. That would explain why these strange musical instruments look and sound like ghosts screaming through the wind.

Now that they know what to look for, they’ve found more, but not enough for any of us to buy or play with them right away. As you might expect, most are kept in museums.

Aztec Death Whistle: A Guide to the Afterlife

Roberto Velázquez Cabrera thinks he knows more than most people do about the story. We’re inclined to agree, since this mechanical engineer has spent many years recreating the sounds of these death whistles so he can better understand and study them.

He started the Instituto Virtual de Investigation Tlapitzcalzin in Mexico. He comes to his conclusions based on his broad knowledge of the Ancient Aztecs

Roberto says in his article for Mexico Lore that the death whistle is probably not used very often, which is why we only found a few of them so late.

He believes they were utilised in warfare, on Day of the Dead, and to aid sacrificial souls find the afterlife. Sacrifices and enemies should both be revered and helped to the underworld.

Can you buy a death whistle from the Ancient Aztecs?

You can get copies of the Aztec death whistle today. It is made of ceramic and is better than any of the ones that are sold made of plastic. It’s simple to use and makes a very loud screaming sound.

It’s a great trick that can be used for Halloween, Day of the Dead, or just to have fun.

Only Salvador Guilliem Arroyo published archaic death whistles in 1999.They were found in a 20-year-hands old’s near Tlatelolco’s Ehecatl (wind) temple (pic 4).

Whistles are associated with Ehecatl (wind), Mictlantecutli (death), and the sacrifice process. Bones were found in Ehecatl’s ceremonial complex.

Guilliem linked the ceremonial complex’s ceremony to the 1454 famine.

Zoom If the whistles were tied to Ehecatl or the wind, they may have been employed to recreate wind noises, as a tremendous wind cannot always be summoned in a ritual or rite.

Only one ancient literature mentions this style of whistle

He held the whistle symbolic of the deity [as Lord of the Night Wind] and produced a noise like the night wind rushing through the streets (Lewis Spence, Myths of Mexico and Peru, London, 1913, pp. 69-70).

What the Aztecs thought about death whistles

Both says, “There’s no proof, but it’s still possible.” “We haven’t found an Aztec warrior with a death whistle around their neck yet. At the moment, it seems to be more of a tool for rituals.”

The death whistles unearthed at the Mexico City temple site are less than 2 inches long, but Yxayotl’s were significantly bigger. The smaller old whistles don’t make the same horrifying screams as the big modern copies.