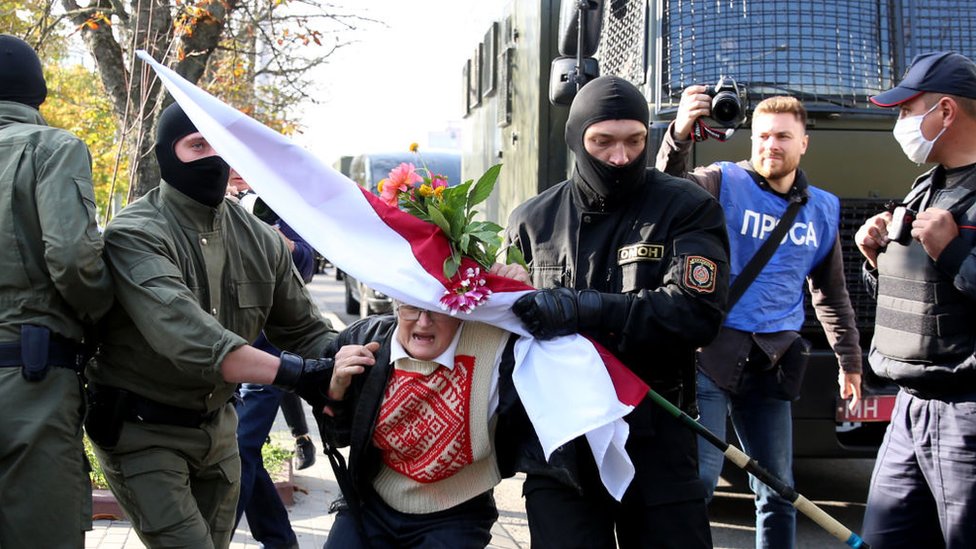 Belarus police have detained hundreds of women in the capital Minsk who had joined a march demanding that longtime President Alexander Lukashenko resign.

Among the detained was Nina Bahinskaya, a 73-year-old great-grandmother who has become an icon of the protest movement.

Mass protests are expected for the sixth straight Sunday over what was widely seen as a rigged election.

President Lukashenko, who has ruled Belarus for 26 years, claimed an overwhelming victory in the 9 August poll, but a brutal crackdown on initial protests against the result only fuelled popular anger.

Around 2,000 people, mostly women, joined Saturday’s march, which has become a weekly prelude to mass demonstrations every Sunday. They briefly scuffled with police who then blocked their path and started picking people one by one.

Police detained so many protesters that they ran out of room in vans and had to free some of the women, according to AFP news agency. It reported that Ms Bahinskaya was taken to a police station and released shortly afterwards.

Video posted by the independent Tut.by website showed a masked officer abruptly removing the flag and flowers she was carrying as she was pushed into a van.

In total, more than 300 women were detained, local human rights group Viasna said. Police did not give a number.

The opposition movement has been led by three women but only one, Maria Kolesnikova, has not gone into exile. She was charged with incitement to undermine national security days after allegedly ripping up her passport when the authorities tried to expel her from the country.

Svetlana Tikhanovskaya, who stood against Mr Lukashenko as the opposition candidate, said she won the election and was forced to flee to Lithuania shortly afterwards. She is expected to meet European Union foreign ministers and the bloc’s diplomatic chief in Brussels on Monday.

The third of the three women, Veronika Tsepkalo, has also left the country, a former Soviet republic.

The EU is considering fresh sanctions on the Lukashenko government because of the crackdown on the protests. According to UN Special Rapporteur Anaïs Marin, more than 10,000 peaceful protesters have been “abusively arrested” and “over 500 cases of torture, committed by state agents” have been reported.

Mr Lukashenko says the demonstrations are backed by foreign powers and has offered to implement constitutional reforms but, so far, has refused to step down. Earlier this month, he secured a $1.5bn (£1.2bn) loan from Russia..