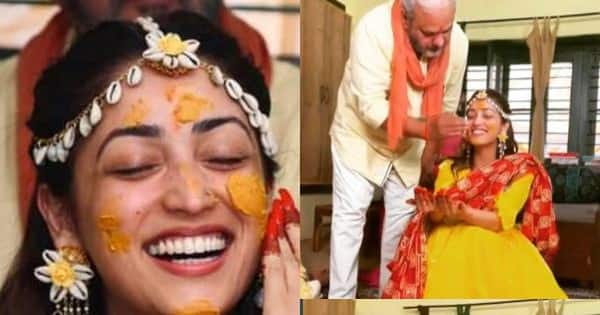 Bollywood actress Yami Gautam shared an unseen video from her Haldi ceremony on Thursday to wish her father his birthday. The gorgeous diva wished her ‘camera-shy father’ Mukesh Gautam on his birthday and captioned the post as, “It took a wedding to have finally so many moments captured with my camera-shy father Happy birthday to my amazing paa And your non-stop commentary is more prominent than all of us present together in the frame, eh @s_u_r_i_l_i_e #myworld.” Also Read – Flab to fit: Farhan Akhtar shares amazing transformation for his character in Toofan; Hrithik Roshan and girlfriend Shibani Dandekar react

She also joked about her sister Surilie Gautam about her non-stop commentary. Also Read – When Salman Khan won our hearts with his REACTION on ex-girlfriend Aishwarya Rai’s wedding with Abhishek Bachchan

In the video clip that Yami shared, she was seen wearing a yellow dress along with a red and golden dupatta. While her father was seen applying her haldi on her face, hands, and feet. As the video starts, Surilie says ‘Papa smile’ and suddenly a phone rings and she says ‘Who is calling you?’. Also Read – RIP Dilip Kumar: Abhishek Bachchan REVEALS how he lost an opportunity to share screen space with father Amitabh Bachchan’s ‘idol’

Take a look at the video:

Within no time, netizens flooded her comments section as they wished her father on the special occasion.

On the personal front, Yami tied the knot with Uri filmmaker Aditya Dhar in a private ceremony on June 4. She announced the same on social media as she wrote, “With the blessings of our family, we have tied the knot in an intimate wedding ceremony today. Being very private people, we celebrated this joyous occasion with our immediate family.”

On the work front, Yami has a lot of projects in her kitty including Dasvi with Abhishek Bachchan and Nimrat Kaur, A Thursday, Bhoot Police with Jacqueline Fernandez, Saif Ali Khan and Arjun Kapor, and Aniruddha Roy Chowdary’s Lost.

Colombia’s President Shot at in Helicopter but Survives Attack

Pawandeep Rajan CONFESSES he is in love; is it about Arunita Kanjilal? – watch...