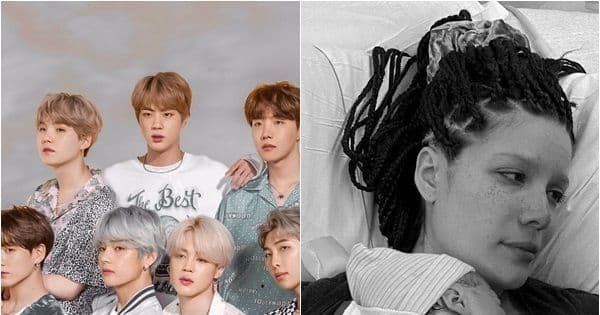 Popular South Korean band BTS are known for their epic collaborations with singers across the globe. One such collaboration happened with American singer Halsey who joined hands with the septet comprising of RM, Jin, Jimin, Jungkook, J-Hope, V and Suga on their 2019 hit Boy With Luv. Since then, they have been friends with each other. And as Halsey welcomed her first child with her boyfriend Alev Aydin, the BTS showered her with their congratulatory messages on Twitter.

Halsey had recently announced that she has been blessed with her first child. She took to Instagram to share adorable pictures of herself with her newborn baby. The couple named him Ender Ridley Aydin. “Gratitude. For the most “rare” and euphoric birth. Powered by love. Ender Ridley Aydin 7/14/2021,” she captioned her post.

In January, Halsey had made the announcement on social media that she was expecting her first child. She posted three pictures on Instagram, where she was seen flaunting her baby bump. In the first picture, she was seen wearing a multi-coloured crochet bralette paired with denims. In the other pictures she just wore her denim. The singer captioned the images as ‘Surprise’ with a milk bottle, rainbow and baby face emojis.

Meanwhile, the BTS wants the world to dance on their latest track Permission To Dance as they have announced a challenge on YouTube Shorts. Starting Friday, fans across the globe can create a crisp 15-second YouTube Short from the mobile app, copying the dance moves in the music video.

The dance moves for this challenge are the International Sign gestures that the septet was seen doing in the music video, bearing the meaning Joy, Dance and Peace. As part of the challenge, BTS will spotlight some of their favourite shorts in a compilation video, so participants are encouraged to use hashtags #PermissiontoDance and #Shorts for their creations.

Pooja Hegde looks like a real temptress in this fitting bodysuit and you won’t...

The era of Covid ambivalence: what do we do as normalcy returns but Delta...