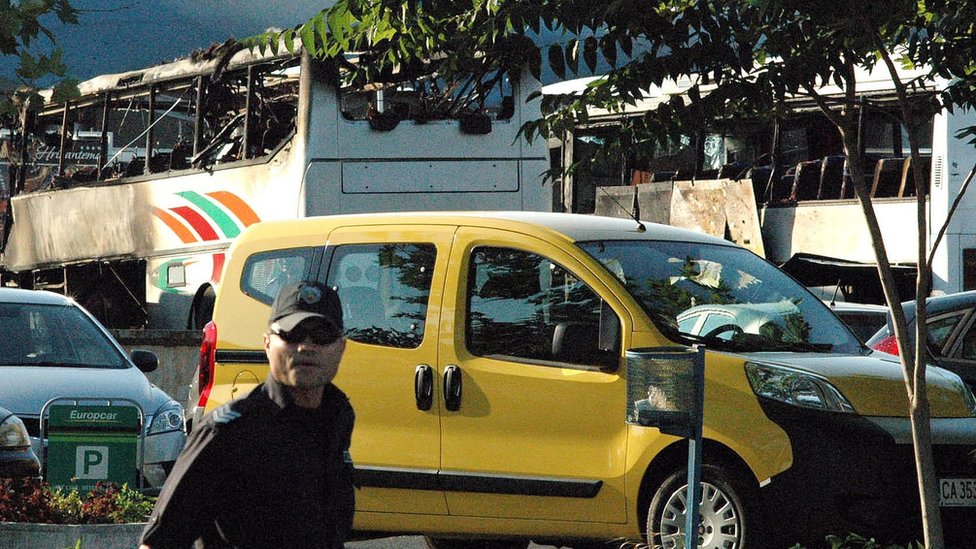 A Bulgarian court has sentenced two men to life in jail over a bus bombing in 2012 that killed five Israeli tourists and their Bulgarian driver.

Meliad Farah, a Lebanese-Australian, and Hassan El Hajj Hassan, a Lebanese-Canadian, were found guilty of helping a Lebanese-French man who prosecutors said died after planting the bomb.

Their whereabouts are not known.

Hezbollah has been accused of carrying out a string of bombings and plots against Jewish and Israeli targets, and it is designated a terrorist organisation by several Western states and Israel.

The EU put Hezbollah’s military wing on its terrorism blacklist after the bombing.

How did the attack happen?

On 18 July 2012, a bus carrying Israeli tourists exploded outside the airport in the Bulgarian Black sea report of Burgas.

Prosecutors said the two men entered the country the month before the attack using fake ID documents, along with the bomber, who was later identified through DNA analysis as Lebanese-French dual national Mohamad Hassan El-Husseini. Farah and Hassan are thought to have left Bulgaria soon after the attack.

In 2016, Farah and Hassan were charged with complicity in an act of terrorism.

Prosecutors accused them of providing the explosive device and logistical support to El-Husseini, and said the evidence linked them to Hezbollah.

On Monday, Sofia’s Specialised Criminal Court found Farah and Hassan guilty and sentenced them to life in prison without parole. They were also ordered to pay compensation to the victims’ families.

“The court’s sentence reflects the punishment we asked for and is adequate to the committed crimes. Whether it will be served or not will be a result of the search of the wanted persons, which is ongoing,” Prosecutor Evgeniya Shtarkelova was quoted as saying by Reuters news agency.