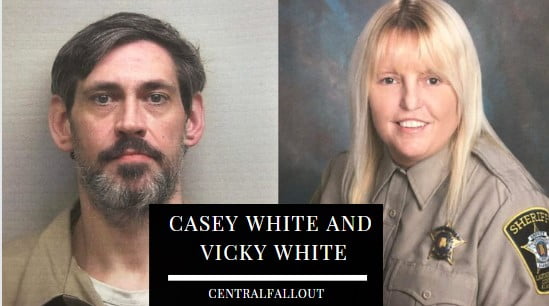 Casey White, the Alabama convict who escaped prison with his jail boss-turned-lover Vicky White, was charged Tuesday with felony murder in her death.

Today in this article we are going to discuss about Casey White is accused of killing ex-jail administrator Vicky White, Investigation Of Case, Vicky White’s death raises many issues and Vicky and Casey White’s charges. Follow centralfallout to getupdated.

After Casey White escaped from the Lauderdale County Jail in Florence, Alabama, where Vicky White worked as a corrections officer, the two ran away together for 11 days. Casey wrecked and Vicky shot herself after a high-speed car chase in Indiana on May 9.

It’s unclear if prosecutors have modified their story on felony murder charges. First-degree escape is another charge against him. Casey White shot Vicky White in the head during an escape attempt, according to AL.com. Lawyer for Casey has stated that he will be pleading not guilty.

Defense attorneys plan to file several motions before trial begins, one of which is that the state turn over a copy of the autopsy report on Vicky White. Mark McDaniel, his attorney, stated in a statement released to the outlet that the defence team would submit additional petitions outlining the remedy sought once they had the autopsy results in hand.

In addition to doing time for a 2015 crime spree, he faces a capital murder trial at the end of the year. Ex-lawyer Dale Bryant has stated that Casey “suffers from a mental disorder.”

“When he’s on medicine and in a supervised environment… he’s a decent person,” Bryant added. According to his parole officer, “he can’t stay on his medication and self-medicates by smoking methamphetamine or taking other illegal narcotics”

Vicky said she was sending Casey to the courthouse for a mental health evaluation. Instead, she and Casey escaped with the help of the police cruiser she was driving. She had just recently sold her Lexington residence and turned in her retirement paperwork. Currently, there is no scheduled trial date.

The fleeing police officer and prisoner have been in Evansville since May 3, according to Vanderburgh County Sheriff Dave Wedding. Later, Casey White and Vicky White were seen leaving a motel with wigs on.

Evansville investigators learned Sunday night about a 2006 Ford F-150 left in a car wash. Indiana was the target. Last spotted 175.

Police followed Vicky and Casey White, sparking a high-speed car pursuit. A US Marshals truck reportedly hit the couple’s Cadillac. The car flipped over and was destroyed.

Long automobile chase became popular. Vicky White’s friends were concerned about her disappearance. White’s reasons remain unclear. she helped the inmate escape, according to the details.The rumours stunned Vicky’s family and coworkers. The seasoned officer had a “unblemished record.” Her colleagues respect her.

Singleton had explanations about Vicky White’s conduct. Why did she do this? Maybe they’ll never know after her death.

Casey White returns to Alabama. Before escaping, he was serving a 75-year murder sentence. Vicky White was under the charges of permitting or facilitating escape in the first degree. She was also accused of identity theft for buying a 2007 Ford Edge. The car which she used to escape the prison with the inmate.

Singleton escaped well. He needed money, resources, and a car. The pair’s lack of help hindered the investigation.

Vicky White resigned a week before the escape. She sold her home below market and bought the getaway automobile. The day she escaped with Casey White was her last day of work, albeit the documents were never finalised. Chris Connolly, Vicky White’s 17-year employee, told CNN he’d trust her with his life.

What Happened to the Turpin Children After They Fled Abuse & Slavery?