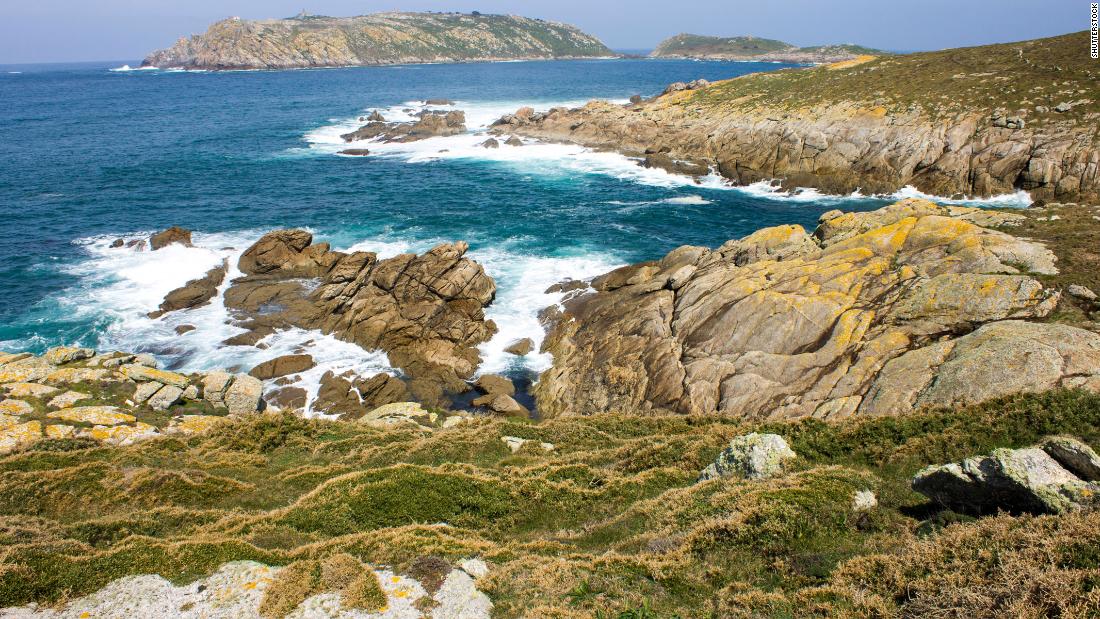 (CNN) — Packing four bathing suits for a one-week vacation might seem like overkill. Especially when the trip involves a 50-plus-mile hike through one of Spain’s rainiest regions.

The trail snakes atop soaring, rugged cliffs that drop precipitously to the sea, and our trek would be along a portion of shoreline known as the Coast of Death (Costa da Morte), which fronts the Atlantic Ocean in Galicia, a region in the northwestern corner of Spain.

But I’m eternally optimistic about finding sun and sand, no matter how unlikely the destination might appear.

The Coast of Death is aptly named, given that it’s like the eastern Atlantic’s version of the Bermuda Triangle. Since the 14th century, records have documented the sinking of more than 600 ships — some disappearing without a trace — that claimed thousands of lives.

It’s no wonder, considering the particular mix of conditions that makes sailing these waters so menacing. Cliffs pepper the coastline where the waters are laced with strong currents, with some sections very shallow and others dotted with rocks hidden not far from the surface.

The area is frequently hit with fierce storms; fog can roll in suddenly; and winds often bluster at more than 75 miles per hour. What’s more, this coast’s association with death dates to ancient times when the world was thought to be flat. Locals believed that beyond the westernmost cape, Finisterre (which literally means End of the Earth), was nothing but darkness and doom.

For those who sail these treacherous waters today, a multitude of lighthouses strung along the cliffs offer some modicum of security, guiding them to a safe port. Appropriately, the hiking trail navigating the 125 miles from Malpica to Finisterre is named the Camiño dos Faros (Way of the Lighthouse).

This is the route that a friend and I take on our self-guided trek in September pre-pandemic, with fingers crossed for plenty of sun and swimmable seas. (Luckily, the tour operator — On Foot Holidays — arranges transport of our luggage with all those bathing suits to our small pension or hotel each day.)

Hikers follow the lighthouse trail, Camiño dos Faros, near Traba Beach and the town of Laxe.

More than a mile of sugary, white sands skirt the village of Laxe, lulling us into complacency as we lounge on our beach towels.

But, anxious to check out Faro de Laxe, the nearby lighthouse that the receptionist at our hotel assured me was a short, lovely walk away, I leave my friend to work on her tan.

The supposedly languid path suddenly slims along an undulating landscape of wildflowers and thorny evergreen shrubs, inducing vertigo as I gaze down on the sheer cliffs pummeled by the roiling seas far below.

With the wind kicking up and the waves beating against the rocks, it’s obvious why an immense fissure beside the path is named “A Furna da Espuma” (Oven of Foam), as frothy sea spray spews into my face. The sun-splashed beach in Laxe seems oh-so-far-away from this dramatic scene.

Another day, we stand in a turbulent seaside landscape blanketed with purple and white heather, pondering the headstones at the English Cemetery where almost 200 British sailors were buried when their vessel, the HMS Serpent, ran aground in the late 19th century.

The roaring sounds of the angry sea follow us as we continue, trekking across two undeveloped stretches of sand — Playa de Reira and Playa de Balea.

We have nothing to distract us but the multifold shapes of the wispy clouds painted across the cerulean sky.

Pulling ourselves away, I’m captivated by the distant sight of the Vilan Lighthouse, Spain’s first electric beacon — built to prevent another HMS Serpent-type tragedy — whose tower rises some 80 feet above the rock-jumbled peninsula.

Wending our way through boulders that have eroded into forms fit for a Rorschach test in this wave-lashed locale, we examine the remains on Cape Vilan of the original, squat, octagonal lighthouse that once worked on steam, but whose light was nowhere near as powerful as the Fresnel lens of the more contemporary Cabo Vilán Lighthouse.

The landscape varies greatly along the trail, veering from sandy beaches and windswept cliffs to lush forests.

Every day, we’re treated to a landscape that changes considerably around just about every bend in the trail. At times, it hugs the barren cliffs pocked with jagged boulders and at others veers into the interior that’s blanketed with lush pastures and dense pine and eucalyptus forests suffused with an intoxicating, sweet aroma.

Even as we grow to expect the unexpected in this nature-scape, I’m still surprised to spy a bit of a teal-blue bay peeking out between the branches of a dense pine woodland. A desolate, unnamed, sandy swath offers an ideal swimming experience with calm, temperate waters.

An added bonus: perfectly flat rocks at one end of the beach make for a first-class, informal picnic spot. The only sound is the gentle lapping of waves on the shore. We change into our bathing suits, not concerned someone will spot us because there’s not a soul in sight.

Waking to an incessant drizzle on another day, we count ourselves lucky to experience just one day of rain over the five-day hike.

A misty veil settles across our path as we venture to the village of Os Muinos where we hear rushing waters. We take a set of stairs down to a stream (Rego Negro) that’s flanked by a placid wetland with shaded stone tables, making for a picture-perfect picnic spot despite the damp conditions.

Still, the sea is never far away. Our pastoral route soon skirts Playa de Merexo, a beach with tall, grass-covered dunes. In a landscape festooned with wildflowers, two roan horses nibble in a pasture above the sands.

This blissful vibe contrasts with our somber state of mind once we reach the coastal town of Muxia. There, we gape at a 35-foot-tall, granite monolith that recalls a massive eco disaster and those Galician volunteers who mobilized in 2002 to clean it up.

The seriously damaged Prestige, an oil tanker, split in two, spilling tens of thousands of tons of oil along the coast, contaminating sea and sand. The monument with its dramatic fissure is appropriately named “A Ferida,” which translates to “The Wound.”

Dining where the river meets the sea

Our route soon plunges into a sun-dappled forest draped in a tapestry of green. Beyond the thick foliage, an egret glides above us as we parallel the rushing waters of the River Lires, making our way to a highly recommended scenic cafe: Bar Playa Lires.

Set high above the sea where the river empties, the restaurant’s terrace looks out to the pristine Playa de Nemiña that’s almost footprint free. We dig into pulpo á feira (octopus Galician style) that’s cooked with olive oil and paprika, thinly sliced, and served in a clay dish.

In this serene setting, our distant gaze falls on the path we’ve just taken, now a mere fog-coated ribbon snaking along the Coast of Death.

It’s more than a little bittersweet when, in the distance, we finally spot the terminus of our journey: the Finisterre Cape that extends beyond the port city for which it is named. As we stroll through a stunning conifer forest where tree branches form dark tunnels and ferns stand several feet tall, swaying in the breeze, the air crackles with a sense of the magical.

“It’s straight out of Lord of the Rings!,” says my companion.

The enchantment continues past this woodland when we look back and see a thick curtain of mist suddenly blowing over the path we trod not minutes before.

Our boutique hotel on this craggy cape, O Semáforo de Fisterra, provides us with an apt resting place for lovers of lighthouses, like myself. It’s perched atop dark cliffs beside a 19th-century lighthouse that faces the raging Atlantic.

Of the individually themed guest rooms, I lucked out with one named “Dos Faros,” facing the lighthouse. I keep the blinds up, allowing the beacon’s cool, revolving glow to pierce the darkness in my room. And, as I doze off, the howling winds are a reminder of the deadly coast where we still somehow found plenty of sunny, calm seas.

UK-based On Foot Holidays specializes in self-guided walking routes all over Europe. Their Camino dos Faros trip can be booked as a 5-, 7- or 10-night journey depending on how much time you have, and the mileage and level of strenuousness you prefer. (The first two days of the 10-night trip are especially rigorous.)

They provide trip notes, maps, GPS tracks (that can be uploaded to your smartphone) and local phone support to assure you won’t get lost. A taxi carries your luggage to your accommodation each day, but you can arrange to have the taxi first drop you off at a different trailhead to shorten your trip that day.

Opinion | How to Raise a Happy Family When You’re Homeless

Covid-19 pandemic in the US is ‘spiraling out of control’ due to unvaccinated people, Trump administration official says

For us NHS paramedics, the rise in calls to Covid cases is ominously familiar...

With or without Giannis Antetokounmpo, Khris Middleton has established himself as Bucks’ closer