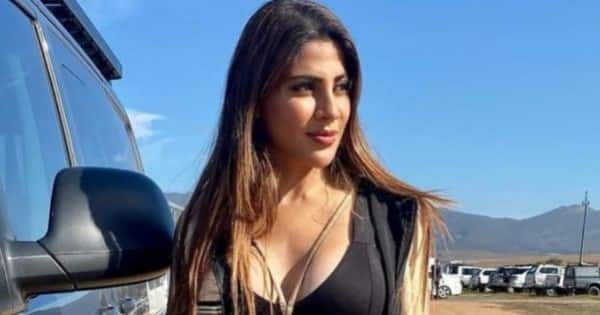 It was shocking to see Nikki Tamboli getting eliminated in the first week of Khatron Ke Khiladi 11. She had aborted three tasks and was eventually evicted. Also Read – Khatron Ke Khiladi 11: Madhurima Tuli BLASTS the makers for recreating ‘frying pan’ scene with Vishal Aditya Singh

After her elimination episode aired, Nikki said that her parents weren’t pleased with her performance. Speaking with SpotboyE, Nikki said that when she was sitting and watching my episodes with my family I could see that they were not very happy. Also Read – Khatron Ke Khiladi 11: Vishal Aditya Singh REVEALS he used to flirt with Shweta Tiwari! And you won’t believe how the actress used to react

“The only thing that moment I felt as if I would have tried I may have gone a long way. I had trust in myself that I can overcome my fears and fight with my fears. But that didn’t happen. And I am also disappointed in myself. I was not expecting this short journey. I don’t know what happened to me suddenly I was going into panic mode and was not able to manipulate my mind,” said Nikki. Also Read – Khatron Ke Khiladi 11 premiere: From Shweta Tiwari kissing a chameleon to Divyanka Tripathi taking blessing from a giant lizard – here’s all that went down

Nikki had also shared a note on Instagram. She wrote, “It’s as difficult to describe in words as it was to perform that difficult stunt out there. I know this came as a shock to all my fans and I too was disappointed about it but more than that I want to say sorry and thank you to Rohit sir that inspite of such motivation and mentoring I couldn’t make it and did abort the stunt. It wasn’t easy but I did have a lot fears and emotional baggages along before every stunt. But this journey has been one hell of a ride and I will cherish each and every moment of it forever. Until next time…See you all for my next super soon!”

America (finally) gets an industrial strategy