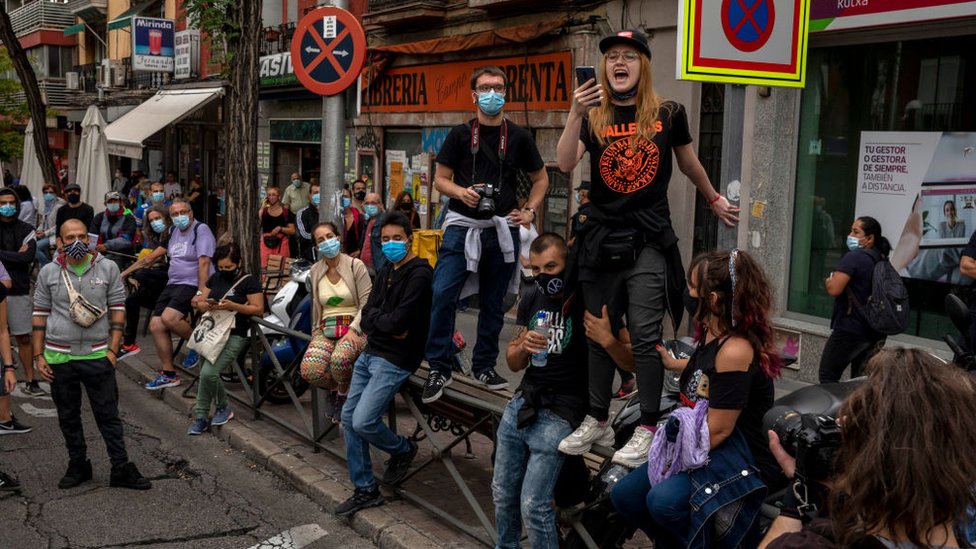 Hundreds of residents in some poorer areas of the Spanish capital Madrid have protested against what they call discrimination ahead of new lockdown measures to stem a rise in Covid-19.

The curbs on movement and gatherings start on Monday and affect 850,000 people, many in areas of lower income and with higher immigrant populations.

Spain has the highest number of coronavirus cases in Europe.

Madrid is once again the worst-hit region. On Sunday, peaceful protests were held in 12 of the 37 districts affected by the new restrictions.

In Vallecas, a southern district with one of the highest infection rates in the capital, residents said the health system was paralysed and that they were feeling stigmatised and fearful that the new restrictions will deprive them of income.

Some chanted “Vallecas is not a ghetto” while banners said “No to segregation” and “No to a class-based lockdown”.

“It’s illogical that you can go and do things in wealthier areas, but you can’t do the same in Vallecas. There is the same risk of contagion. They’re discriminating,” 56-year-old resident Begona Ramos told Reuters news agency.

In a video posted on Twitter, Madrid Mayor José Luis Martínez-Almeida said the restrictions announced did not discriminate against the poor, adding: “There are no first-class residents and second-class residents… We have to be together at this moment.”

Residents will only be able to leave their zone to go to work, school or to seek medical care. Social gatherings within their zone will be limited to six, public parks will be shut and commercial businesses will need to close by 22:00.

Madrid regional health chief Enrique Ruiz Escudero said if these measures did not reduce the number of infections, a city-wide lockdown could follow. “If it’s necessary to shut down Madrid, we’ll do it,” he said in an interview with ABC newspaper (in Spanish).

The protesters also called for the resignation of Madrid regional leader Isabel Díaz Ayuso, who has been criticised for saying that “the immigrants’ way of life” was partly to blame for the rise in infections.

She is expected to meet Prime Minister Pedro Sánchez on Monday. Despite the worsening situation, he ruled out a second national lockdown to curb the virus.

According to Spain’s health ministry, the country has confirmed more than 640,000 coronavirus cases since the start of the pandemic, with nearly 120,000 of them in the first two weeks of September. The country has reported more than 30,000 deaths.