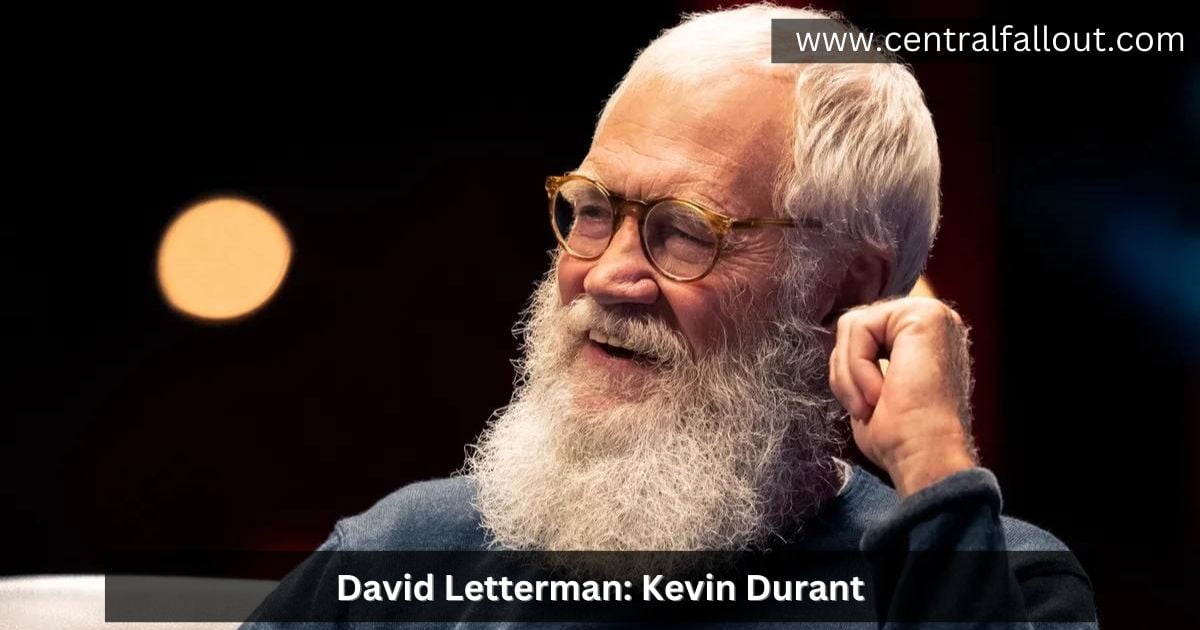 During his upcoming six-episode return to the air, David Letterman will welcome back his former colleagues for a reunion that has been overdue. Among the guests are former NBA star Kevin Durant, former NBC news anchor Brian Williams, former MLB pitcher Mark Grace, and comedian Jerry Seinfeld. All will be seen in the new episodes, which will premiere on CBS on Monday, July 29.

‘My Next Guest with David Letterman‘ has a super-stacked line up of celebrities for its fourth season. It’s set to debut on May 20. It features guests like Kevin Durant, Ryan Reynolds, Will Smith, Cardi B and Julia Louis-Dreyfus.

“My Next Guest with David Letterman” is a three-time Emmy Award-nominated series hosted by David Letterman. Each episode focuses on one person and is filmed in front of a live audience. The show has been praised for its insightful conversations.

Kevin Durant’s interview will air on May 20, and will cover a wide variety of topics, including his family, social media, and trash-talking. He will also discuss the positive and negative effects marijuana has on the human body, as well as his views on marijuana use among athletes.

The series will feature a number of celebrity guests and stand-up routines, as well as comedy bits that are a little more out there. The Netflix series is set to debut in 2018.

David Letterman is no stranger to comedy routines. He’s a frequent participant in non-desk comedy routines on Late Night, and he has become more interested in using others to star in his comedy bits.

He was also known for inventing the Top Ten list. He’ll often book the same guest for more than one episode.

My Next Guest Needs No Introduction with David Letterman

Considering his long and illustrious career, it’s no surprise that David Letterman has amassed a trophy cabinet aplenty. Among his numerous awards and accolades are multiple Emmys and a Peabody, to name but a few.

In addition to hosting the longest running late night show in television history, he has done the unthinkable and become a bona fide celebrity

In fact, his television show has garnered the dubious distinction of being the most popular television program in America

Of course, the late night talk show isn’t the only time the man spends a few minutes at the helm. He also aces the requisite office jaunts, snagging his fair share of celebrity guests.

Some of the more memorable visits include a trip to Kanye West’s Malibu pad, a tete a tete with Ellen DeGeneres and a few hours with the legendary scribe, Jerry Seinfeld.

Having spent 33 years on late night television, David Letterman has decided to come out of retirement and host a new talk show series for Netflix.

He has teamed up with producers Brook Posch and Lilly Burns. The series will consist of six episodes that will all be pre-recorded.

The show will also feature in-field segments, which will take place outside of the studio

The show will feature longform conversations with a single guest. Each episode will also include an in-field segment, in which Letterman will explore a topic that is not necessarily in the studio.

The show’s first episode will feature President Barack Obama. It will also feature interviews with Kim Kardashian West and Dave Chappelle. It is unknown whether President Trump will appear on the show.

During his thirty-three years as a television talk show host, David Letterman pushed the format of his shows beyond what predecessors like Johnny Carson had done.

He also introduced innovative comedy bits and made quotidian life outside of the studio a subject of interest for viewers. He was also a savvy co-executive producer, and he helped bring the late night talk show to the forefront.

David Letterman is now set to return to television for a new show on Netflix. He will host six one-hour episodes, combining in-studio interviews and in-field features.

The show is produced by New York-based RadicalMedia. It’s expected to debut next year.

The new series will feature long-form interviews with a single guest, as well as in-field features. Each episode will also include a stand-up gig by one comedian.