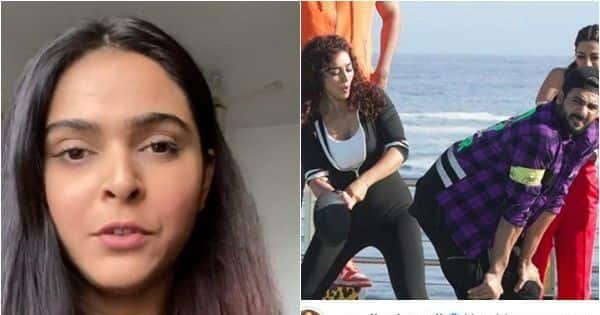 It wouldn’t be wrong to say that Indian television is all about drama, which is also something that viewers want to see. And to much extent, daily soaps have managed to fulfill this daily dose of entertainment through different storylines and their rising TRPs are the testament of their success. But sadly these overdramatic sequences have also taken over reality TV shows that mostly rely on all the fillers than performances. And the recently released Khatron Ke Khiladi 11 just proved us right when they recreated Madhurima Tuli’s ‘frying pan’ scene with her ex boyfriend and the show’s contestant Vishal Aditya Singh. Also Read – Khatron Ke Khiladi 11: Arjun Bijlani reveals the real reason he participated in the show and it is for his son Ayaan! Here’s why

The infamous scene was recreated between contestants Maheck Chahal and Vishal. The channel also tweeted the picture of it with a caption that reads, “#VishalAdityaSingh ke bigg boss experience ne sikhaaya ki unko ladkiyon se bach kar rehna chahiye.” For the uninitiated, Madhurima had hit Vishal with a frying pan repeatedly in one of the episodes of Bigg Boss 13. She did so when Vishal provoked her by throwing water on her face. It was one of the most talked about scenes on the show. But using the infamous scene to promote Khatron Ke Khiladi 11 has been the lowest of lows that the makers could go for. Also Read – Khatron Ke Khiladi 11: After facing flak, Nikki Tamboli pens an apology note for her ‘disappointing’ outing for fans, and mentor Rohit Shetty

We have already witnessed the consequences of this promotional stunt in real life as it comtemplated Madhurima to ask the makers of the Khatron Ke Khiladi 11 to stop dragging her personal issues on public platforms. In a long note, Madhurima wrote that her mom kept crying since that morning adding that she was hospitalised earlier due to the same incident. “You guys dont know a single thing about my personal relation with the person that incident happened. Every single relation in the house was poisonous and everyone has done mistakes in the same house. Please let me move on. It’s a request, please consider this video a humble request to not play with my family’s emotions again and again.. Thank you,” Madhurima posted. Also Read – Khatron Ke Khiladi 11: Madhurima Tuli BLASTS the makers for recreating ‘frying pan’ scene with Vishal Aditya Singh

All said and done, we just want to remind the Khatron Ke Khiladi 11 team that you don’t need to dig out the old skeletons to boost the show’s TRPs and to keep the audience hooked to their TV screens. The two have moved on from their phase of quarrels long ago. You can move on too. Let them have their peace. The show is already popular across all sections for its stunt-based concept. Viewers want to see their favourite stars perform daredevil stunts. Just show them their performances. Don’t make them a part of such fillers at the cost of hurting someone’s sentiments. This is not entertainment, it can’t be.

So please stop, and let the audience be entertained only through those high-octane stunts and nothing else.

Game 4 referee acknowledges Suns’ Devin Booker should have fouled out after hacking Bucks’...

When a Summer Hookup Lasts 12 Years, It’s Time to Reassess