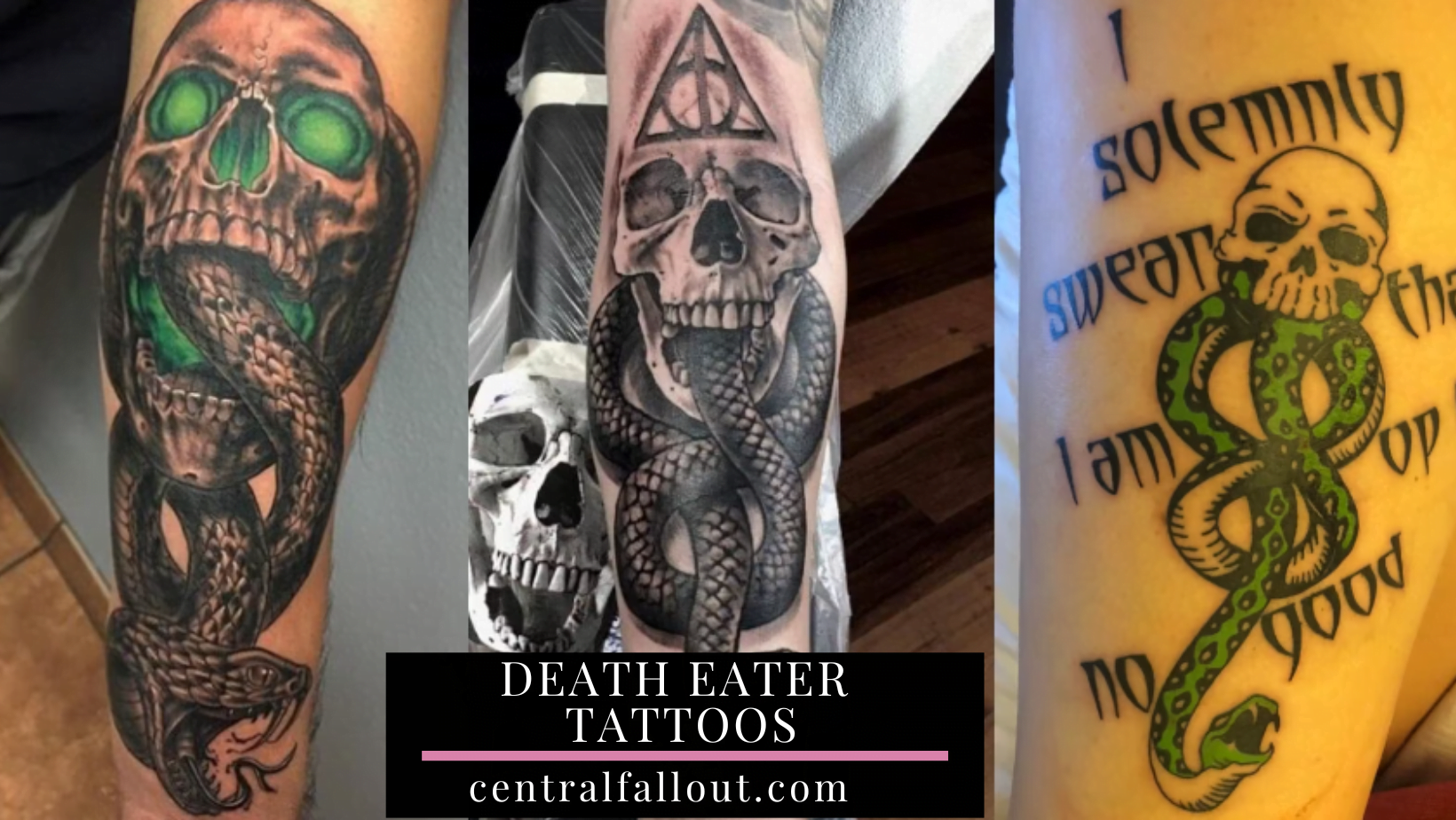 Death Eater Tattoos: Do a dark crime, cast one of the three unforgivable curses, and say “morsmordre.” The dark mark will appear to let everyone know what you did. Voldemort’s Death Eaters all have the dark mark on their bodies, so why shouldn’t you? With a Dark Mark tattoo, everyone will know that you like to do bad things for fun. The symbol of a snake coming out of a skull’s mouth is very heavy metal, and it will help you connect with other Death Eaters all over the world.

Harry and Ron first saw the mark at the beginning of The Goblet of Fire, when Barty Crouch Jr. sees some Death Eaters having fun with muggles who don’t know what’s going on. At the time, he did it to scare Voldemort’s old followers into thinking that He Who Must Not Be Named himself had come back.

They ran away because they betrayed their former master, but not before the whole crowd fell apart in panic. They had no idea that their master would become a real person before the end of the second semester.

People with the Dark Mark know that honour and moral codes are just lies made up by the powerful to keep the rest of the population in line. They don’t care about these false values any more than they care about institutions or vague ideas of good and bad. Only weakness and strength exist in this world. Wear the Dark Mark and let everyone know which side you’re on.

Most Harry Potter fans know that a lot of Death Eaters were in Slytherin House, so it makes sense that this tattoo would honour both Slytherin and the Death Eater status. This colourful tattoo shows the Slytherin crest, which is a picture of the snake that is the most famous animal for the Slytherin house.

Under the picture of the crest is a picture of the famous Dark Mark, which was tattooed on all Death Eaters and also thrown into the sky when the Dark Lord’s orders were carried out. This amazing tribute to the series!

Death Eater Tattoos This tattoo, done by Kayla Moreno, is a great tribute to Death Eaters and the whole Harry Potter series. The tattoo is a picture of the Dark Mark, which every fan knows was the symbol for the Dark Lord and his followers. At the top of the symbol, the words “Death Eater” are written out.

Bellatrix Lestrange was one of the most famous Death Eaters and a devoted follower of Lord Voldemort’s. This character was a big deal in the series because she worked for the Dark Lord.

As a Death Eater, she often did what he told her to do, helping to find Harry Potter and kill those who were close to him. This tattoo is a beautiful picture of this character, and any Harry Potter fan will love how it shows that she is a Death Eater and how important she is in the story.

This detailed tattoo shows a Death Eater’s mask, which these characters often wore in the movies to hide who they were.

Under the picture of the mask, the tattoo shows the words “Avada Kedavra,” which every fan knows. Death Eaters often used the spell “Avada Kedavra,” also called “The Killing Curse.” This tattoo is a perfect representation of that!

Fans of the Harry Potter books and movies know that the Elder Wand was one of the three Deathly Hallows and was very important to Lord Voldemort. This tattoo showed both the Dark Mark of the Dark Lord and the Elder Wand.

Any Harry Potter fan is sure to like this tribute to Death Eaters and this incredibly powerful wand. These symbols are a perfect fit for this series, and this tattoo is gorgeous.

Death Eater Tattoos from Inkbaba Tattoo Studio is very detailed and shows the symbols of Lord Voldemort’s followers and the Death Eaters’ world perfectly. This beautiful tattoo is a great picture of a Death Eater’s mask, and it’s also a great picture of the Dark Lord’s Dark Mark. Any true fan will recognise and enjoy these symbols, which tell the story of the darkness in this famous series.

This tattoo shows the famous Dark Mark, which was branded on every Death Eater, as well as the triangle symbol for the Deathly Hallows, which were important to Voldemort’s plan to beat Harry Potter. This piece of art is perfect for any fan.

This tattoo is so detailed that it shows both a symbol for the Death Eaters and their leader, Lord Voldemort. This tattoo on the sleeve is a perfect picture of the Death Eater’s mask, which any fan will immediately recognise.

The Dark Lord is drawn on the other half of the tattoo, so it makes sense that this object and Voldemort would be drawn together. Fans of the Harry Potter books and movies will love this beautiful ink.

This amazing tattoo shows many things from the Harry Potter books and movies. There is a large Death Eater in the middle of this piece of art, which shows that the Death Eaters are there.

Since this tattoo also shows a part of Severus Snape, it is thought that he is the Death Eater. This piece shows both Snape’s and Voldemort’s wands. The Patronus of Harry Potter is also shown. This detailed tattoo is something that any fan will love.

This tattoo is a simple drawing of a symbol from the Harry Potter books that any fan will know. This tattoo is a picture of the famous Dark Mark, which was tattooed on every Death Eater and thrown into the sky when the Dark Lord’s work was done.Any fan of the Death Eaters and Voldemort’s story will love this simple, minimalist tattoo.

Who Has Reaper Death Seal? All You Need To Know About The Reaper