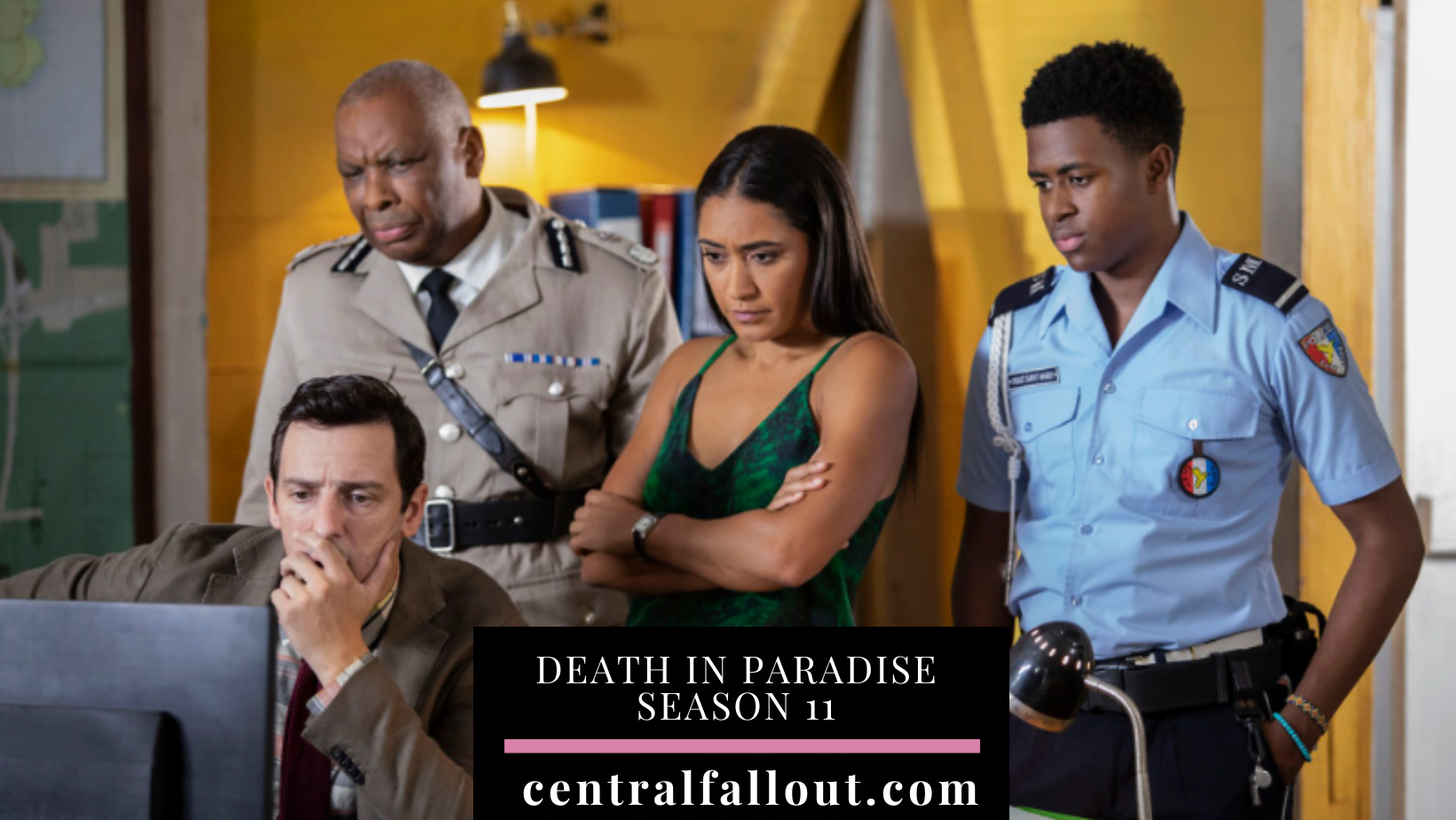 Will Death in Paradise season 11 see Florence and Neville become a married couple? This article contains spoilers. Death in Paradise Season 11 stars Ralf as DI Neville Parker and Josephine Jobert as DS Florence Cassell. It’s finally revealed that the US will be able to see it after it aired in the UK.

We know for certain that Death in Paradise will have a season 12 and a Christmas special.

Ralf Little, talking about the series, tells us that there are a lot of fun things. There’s a skydiving episode and a kidnapping episode. We also have a murder in the middle of concert, a case at a rehabilitation clinic, and a whole episode about chess!

They’re just as diverse and ambitious as ever with these cases. Every time you see a new episode you find yourself slightly amazed. Although it’s easy to get secluded, they are very ambitious in the range of topics they want to tackle on Death In Paradise. This keeps them on their toes and keeps us guessing.

The 11th season of Death in Paradise will be available on BritBox USA on May 3, 2022. Fans in the US can finally see the story between Florence and Neville!

What is the plot of season 11 of “Death in Paradise”?

The main theme of the new series is whether Florence and Neville become an item. What happens if it doesn’t? !

The BBC has also released details about the plot of the new series.

Neville’s sister Izzy (Kate O’Flynn), will show up and cause havoc for her brother. Florence is being asked to cover an undercover investigation to crack a case of drug trafficking on another island. How will Florence respond?

BBC teases that there will be many strange murders for them to solve. The case of a skydiver who is apparently shot in the middle of the air, seems impossible to solve. The team’s series 11 expertise is challenged by a murder at a golf course, a victim at a concert and a case at a rehabilitation clinic.

Episode 1 of “Death in Paradise” season 11: What happens?

Marlon is pleased with himself, and announces that the scene has been cordoned off. We think he did it very poorly. Take a look at the photo below to see how he handled the victim’s car.

We meet Sergeant Naomi Thomas (Shantol Jack) while we wait. Marlon soon gets her measure. She later admits to Marlon that this is her first ever murder case. You’ll find plenty of Saint Marie, Namoi!

Neville quickly learns that the victim’s boyfriend and daughter set up the kidnap to get cash and escape the island. Problems get complicated when Neville discovers the victim’s heroin past and the fact that her boyfriend, an old drug dealer, arrives on the island having been released from a jail cell on another island. Neville finally cracks the case.

Florence is having a heart-to–heart conversation with Neville. She says that she wants to be friends. Sob!

What happens in episode 2?

The victim’s brother is one of the possible suspects. Another suspect is Tamzin Outhwaite, a former EastEnders star.

Although the evidence quickly stacks up in favor of the victim’s brother. But is Neville missing anything? This case is not likely to be solved. The murder weapon was also found in the suspect’s locker. A voicemail that was left by the victim strongly incriminates his brother.

Things are still a bit strange between Florence and Neville, even though they want to be friends. The Commissioner offers Florence an opportunity to go undercover on a risky mission at the end of the episode. What will she tell us?

Just another day at the office!☀️

We’re back filming in paradise for series 12 and can’t wait for you to see what we’ve got in store! 🎥#DeathinParadise @RalfLittle pic.twitter.com/HrrE8OlFqP

What happens in episode 3?

This is a strange case! Neville is puzzled by the fact that a skydiver seems to have been killed in mid-air. How is this possible? The victim is a whizkid who turns out be a bully and all his skydiving staff are suspects. Camera footage clearly shows that the victim was alive when he leapt out of the plane. How could one of them have jumped from the plane and stabbed him midair?

Neville decides to visit the crime scene from the sky and embarks on a skydive. It’s hilarious! There are no prizes for guessing that he doesn’t get it.

Florence is still unsure if she wants to accept the undercover job. She believes that she must deal with her past so the Commissioner takes her to the place where she was shot.

Florence is happy that she has overcome her demons and takes on the dangerous job. But, is this a fatal error?

What happens in the fourth episode of ‘Death in Paradise season 11 episode 4?

Florence, who is hiding in Jamaica as an au-pair, follows Miranda Priestley’s every move as she pretends to be a crime boss. In a twist, Miranda decides that Miranda should head to Saint Marie. This puts Florence in great danger.

What happens if someone else on the island reveals her identity? Miranda is clearly a dangerous character. When a Saint Marie man ends up dead, she’s the obvious suspect. Marlon views the murder as a suicide, and it appears that it was committed.

Neville suspects that it is murder. Florence informs Neville that Miranda was acting strangely at the time of Miranda’s death. Florence is too focused on her snooping and puts her in grave danger. Miranda will react to the discovery of Florence’s true identity. Florence made a small escape in the past, but could she make it this time?

What happens in the fifth episode of ‘Death in Paradise season 11 episode 5?

After Florence, Neville and her friends must adapt to a new world. How will Neville survive without Saint Marie? Neville believes there is more to her death that meets the eye.

What happens in the sixth episode of ‘Death in Paradise season 11 episode 6?

This case baffles Neville. Neville is baffled by this case. Oder was she calling to report an older murder?

Neville’s sister remains on the island. As she makes a big decision about her future, brother and sister finally bond. Darlene is now part of the team.

What happens in episode seven of the series?

BBC teases: “An artist in reggae rap is killed at a soundcheck for an upcoming concert.” Marlon discovers that he has a personal connection with the crime, which makes things uncomfortable.

What happens in episode 8?

Neville is looking to get back in touch with his ex-girlfriend Florence as he continues to search for love.

The BBC teases that the BBC will also show the following: “When a prestigious match of chess ends in murder, the team must figure out how and why it happened.” The commissioner is being confronted by the last person he expected to see about his past.

Who is in the cast for ‘Death in Paradise season 11’?

Ralf Little returns as DI Neville Parker, and Josephine Jobert is back as DS Florence Cassell. Don Warrington, who was the show’s last actor since the first episode, is back as Commissioner Selwyn Patterson.

In the meantime, Shantol Jackson joined Naomi Thomas as a young, ambitious sergeant.

Shantol said I am so grateful for the amazing opportunity to join this fun-filled and entertaining series. It was my father’s favorite show in Jamaica. I remember watching Death in Paradise years ago with my dad. To now be a part of the show knowing that he will be watching me is a surreal moment. I look forward to contributing to the magic!”

Later in the series Kate O’Flynn appears as Neville’s sister Izzy Parker. Ginny Holder is Darlene. Darlene was previously a regular on the show, but she is now a regular.

Tobi has departed the show. Tobi was JP for six seasons and gave up in the last episode of the 10th season. JP was the last to free Marlon. Marlon punched the suspect, but JP insists to the Commissioner that it was him. Marlon then walked away.

Read Also : How did Eazy-E Death? A Well-Known Rap Artist Has Died | News

How did Eazy-E Death? A Well-Known Rap Artist Has Died | News