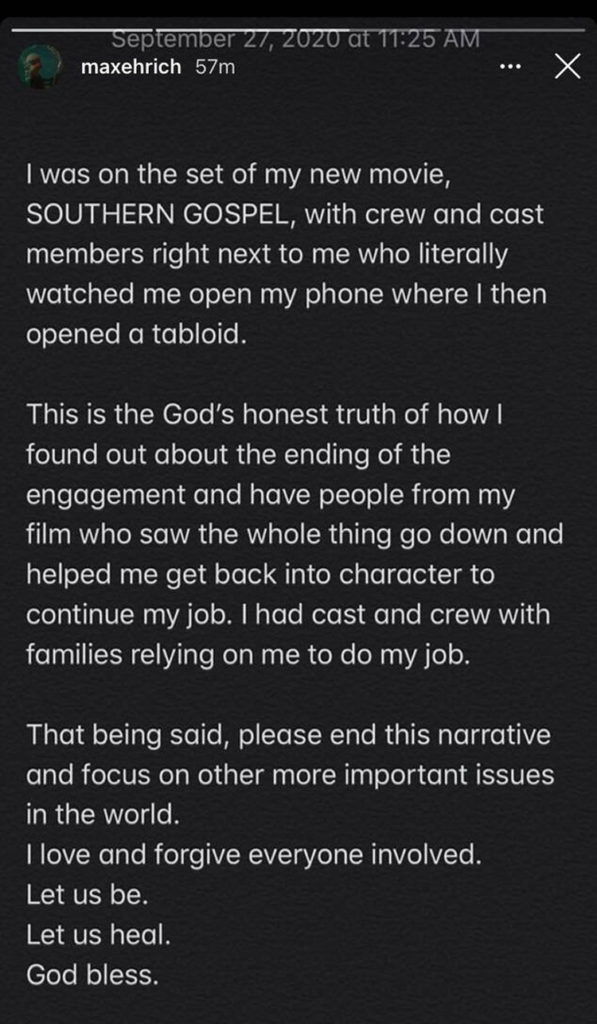 Not so fast, Max Ehrich!

According to new insider info, Demi Lovato apparently did tell the actor that their engagement was over before the news hit the tabloids. And contrary to what the 29-year-old film star himself had said just a day ago, it reportedly appears that he was aware things were over before the news reached the public! Hmmm…

As you’ll recall in our reporting from Saturday morning, Ehrich came out on his Instagram account to discuss how he allegedly found out about his split from the 28-year-old pop music superstar “through a tabloid.”

At the time, the Young and the Restless actor wrote on an IG Stories post (below):

“Imagine finding out about the status of your relationship through a tabloid. While your [sic] in the middle of filming a biopic movie about a Pastor in a Christian Church whose intention of the film is to help people.”

But now, not even a full day later, Demi’s camp is blasting back against Ehrich’s assertion, and claiming he was aware of the split well ahead of anything that landed in the news media. An insider close to the OK Not To Be OK singer said in response to Max’s accusations (below):

“Demi made Max aware that the relationship was over and it was going to come out in the press.”

And yet another insider added more to this claim, according to reporting by E! News (below):

“[Max] is lying. Demi did tell him beforehand. [He] is just trying to stay relevant. Her family thinks he is crazy and is so relieved she has taken this step.”

Nevertheless, being accused of “lying” or not, Ehrich appears to be doubling down in his assertion that he first heard about their split from a tabloid. Here is what he posted on his IG Stories on Sunday:

Of course, these two had a white-hot relationship and engagement which flourished over the past few months during the COVID-19 pandemic. First having gotten together earlier this year, they celebrated their 6-month anniversary earlier this month, so to say things were moving quickly from when they first began dating back in March would make for quite the understatement. And things were easy when there was nothing to do; Demi and Max reportedly really clicked during the downtime of the pandemic’s mandated quarantine periods.

Related: Demi Ignored ‘Many Red Flags’ In Journey To Engagement With Max Ehrich…

But alas, here we are as a society now slowly coming out of quarantine here and there — which may be inadvisable in and of itself — and Demi and Max were once again faced with real world problems and stressors. Very quickly in the last few weeks, then, did their relationship appear to break down, as the 29-year-old actor had jetted off to Atlanta for a film project, leaving Demi behind and thousands of miles away.

And now, well, here we are. What do U make of the breakup, Perezcious readers?! And more importantly, what do U think about this assertion that Ehrich only heard about the split through a tabloid?? Total bull s**t, or real deal?!