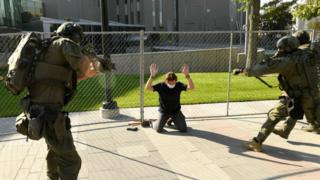 A man has been shot dead during rival right- and left-wing protests in the US city of Denver.

Reports said the dead man had been taking part in a so-called “Patriot Rally” of right-wing demonstrators.

Police said the suspect arrested was a private security guard who was not linked to the counter-demonstrators.

A Denver TV station said it had hired the suspect as a security guard to protect its crew. However, police have not confirmed this.

The “Patriot Rally” taking place in Denver was met by counter-protests by several groups who said they were holding a “Black Lives Matter-Antifa Soup Drive”.

The shooting took place in a courtyard of the Denver Art Museum.

Denver Police Chief of Investigations Joe Montoya said the incident took place shortly after 15:30 local time (21:30 GMT). He said there had been a “verbal altercation” and a firearm was discharged.

Two guns were recovered at the scene and a suspect was taken into custody, he said.

Local TV station KUSA-TV said on its website that the arrested man was a security guard it had hired to protect its crew.

“It has been the practice of (KUSA) for a number of months to hire private security to accompany staff at protests,” the station said.

However, Chief Montoya said he could not confirm that the suspect was working for the station. Neither he nor the victim have yet been identified by the authorities.

Chief Montoya said police had kept the rival rallies separate and there had been no other arrests.