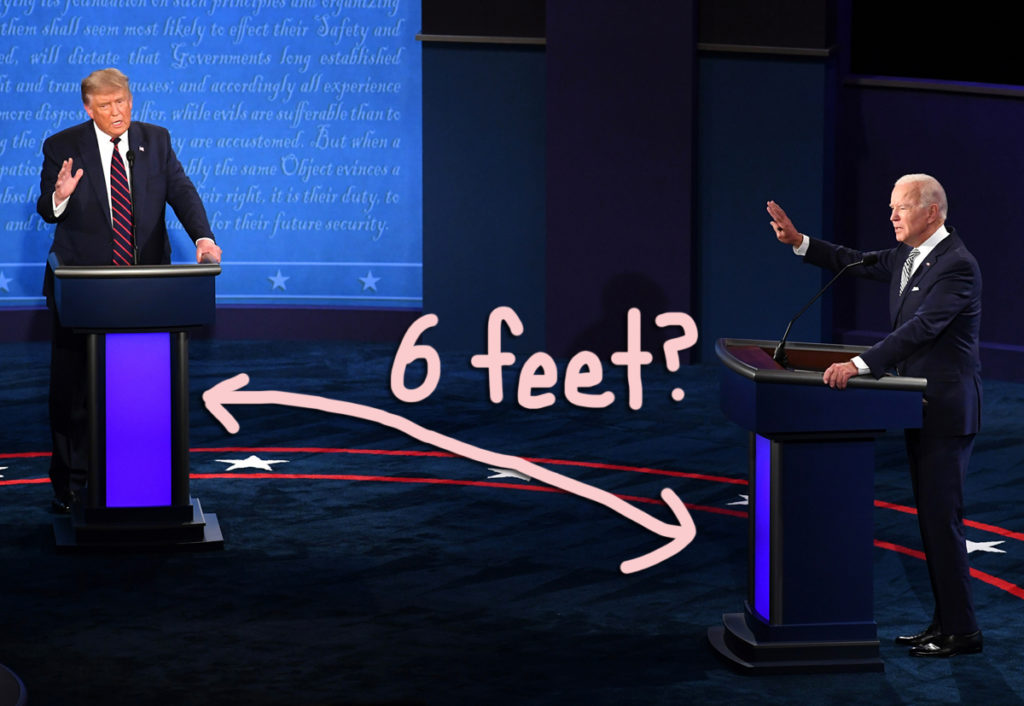 Aaaaaaaand there it is.

Late Thursday night, Donald Trump confirmed via Twitter that he and First Lady Melania Trump had tested positive for coronavirus, and would be isolating themselves to recover. The bombshell came out hours after reporters revealed Trump aide Hope Hicks had tested positive for the virus. She was in close contact with the Trumps over the last few days and, well, here we are…

Related: Celebs Had A LOT To Say About Trump’s ‘Dumpster Fire’ Debate Performance, Too

This whole s**t show first started earlier that day when Trump himself confirmed reporting of Hicks’ diagnosis via the social media platform and revealed to the world that he had been tested:

Hope Hicks, who has been working so hard without even taking a small break, has just tested positive for Covid 19. Terrible! The First Lady and I are waiting for our test results. In the meantime, we will begin our quarantine process!

And just a few hours later, the news was official:

Tonight, @FLOTUS and I tested positive for COVID-19. We will begin our quarantine and recovery process immediately. We will get through this TOGETHER!

About a half hour after The Donald’s announcement, the First Lady also confirmed the diagnosis, and revealed the couple’s plan to shelter in place and recover:

As too many Americans have done this year, @potus & I are quarantining at home after testing positive for COVID-19. We are feeling good & I have postponed all upcoming engagements. Please be sure you are staying safe & we will all get through this together.

White House aides would neither confirm nor deny whether the President and First Lady had experienced any symptoms in the past few days. Typically a prolific late night/early morning tweeter, Trump has not yet sent any more tweets since his late-night announcement. Maybe he’s actually resting??

As CNN‘s resident medical expert Sanjay Gupta noted on-air overnight, the 74-year-old President is in a high-risk category to potentially be seriously affected by the virus, considering his age and weight.

Jill and I send our thoughts to President Trump and First Lady Melania Trump for a swift recovery. We will continue to pray for the health and safety of the president and his family.

Celebs and political pundits have gone all-in on the President’s diagnosis — especially since he’s been downplaying the pandemic for months now — and there are all kinds of theories floating around about how this may tie into November’s election and Trump’s political future.

Where do we even begin?! Let’s take a crack at it (below)…

Stars from ALL walks of life and areas of fame quickly jumped on Thursday night’s reveal.

Sophia Bush was incredulous, quote-tweeting the President and responding with a good point:

“Is it still a ‘Democrat hoax?’ Are you still going to mock people for wearing masks? Are you sorry for lying to the American people for months? I ask these b/c I assume you’ll get the best taxpayer funded gov’t healthcare avail + genuinely hope you recover. But you owe us answers”

And while Padma Lakshmi shaded the s**t out of Trump by simply referring to his reveal as “karma,” outspoken Democrat Alyssa Milano — who herself has suffered through COVID-19 — had a far different take on the President’s news:

“As someone who has had COVID-19 and still suffers from post-covid syndrome, I can honestly say with all that I am that I wouldn’t wish this virus on my worst enemy.Please wear a mask.”

Interesting! That’s how you know it’s REALLY serious, too…

Aubrey O’Day shared a surprising (and low-key kind of hilarious) theory about our country’s leader’s connection to Hicks:

“I really don’t think this is a gimmick to get out of debating Biden. I don’t think his ego would allow him to be the poster child of not wearing masks and then test positive for COVID. I think he got it banging Hope [Hicks].”

OMG! Aubrey!!! Then again, she does know how that family rolls, so…

Todrick Hall perfectly summed up where we all seem to be right now regarding the insane year that’s been 2020:

“2020 is that bitch ass gift that keeps on giving! Trump got on tv mask-shaming Biden and defending his ‘COVID jokes’ and now Trump and Melania have COVID. You can’t make this stuff up!”

No, you can’t! Meanwhile, Whitney Cummings dropped the mic on Donnie’s (lack of) taste, tweeting:

“Of course Trump didn’t know he had COVID, he never had taste in the first place.”

Trump hasn’t exactly been the most trustworthy President we’ve ever had (that’s putting it lightly), and so many people are (rightfully?) skeptical about whether the positive diagnosis is even true — and whether he isn’t using it to craft some sort of election obfuscation strategy.

The case was made many, many times on the social media network overnight, like in this tweet:

“And like the boy who cried wolf, many question the veracity of Trump’s claim that he has coronavirus. A way out of the debates? A way out of the presidency? Pretending to ‘defeat’ the disease? Or does he really have it? #TrumpCovid”

Another tweeter summed up Donald’s (lack of) trustworthiness on this issue perfectly:

“Imagine the President of the United States announcing he has a life threatening virus and half the country doesn’t believe him because he lies about everything else. This is the world Trump has created.”

And a third added:

“Sad when world leaders don’t exactly believe you. The Swedish prime Minister stated that #TrumpCovid could be fake because people tend to feel sympathetic when their leader is sick, that he needs people to think differently of him after that catastrophic debate.”

Seriously, though, what if this is all part of some sick, demented plan?!?!

The ONLY upside to your president having COVID (allegedly): all of his followers who swore this was all a hoax will have to face some reality. (Maybe) pic.twitter.com/3ZEpam9WI9

It has sure made people forget about the President’s horrific debate performance earlier this week, that’s for sure!

Seriously, just another crazy f**ked up moment in the most bizarre year on record.

When will it end??

You don’t have to go very far to find earlier footage of Trump saying the virus was a “hoax,” or downplaying its severity, or assuring people it would magically disappear, or claiming the end of the pandemic is in sight, or… you get the picture.

While another responded to the President directly with a more pointed critique:

“You should be ashamed of yourself for calling this virus a hoax and for holding rallies after you were exposed to Hope Hicks. I wish you well Mr. President, but you have no one to blame but yourself.”

Almost immediately after Trump’s COVID-19 announcement, other people jumped on the Prez by using his own words as their receipts… and they aren’t wrong:

Hey Trump: Don’t worry about the virus. Like you told us on Feb 27, “One day, it’s like a miracle, it will disappear.” So hang in there for that miracle. #TrumpHasCovid #TrumpCovid pic.twitter.com/jBjQJPhH1J

And Then There’s Biden…

Never forget that Trump previously made fun of Biden just DAYS ago during the first presidential debate for wearing a mask:

At his advanced age, Biden is also in a high-risk position should he contract COVID-19. There’s so far no indication Biden is at risk for contracting the virus, but he was in the same indoor room as Trump for almost two hours on Tuesday night when the pair held their first debate, so… yikes!!!

At the very least now, hopefully Trump can admit that this virus is VERY real:

The virus is real and now Trump has it too.

Someone should tell him to not inject disinfectant into his body.

Perhaps he should’ve worn a mask instead of trying to make fun of @JoeBiden for wearing one.#TrumpHasCovid #TrumpCovid pic.twitter.com/C5f9SusAV0

Whew. Just when you think things can’t get any more out of control!!! This has been quite the October Surprise, isn’t it, y’all?! And it’s only the start of the freakin’ month…

Looks like RBG successfully argued her first case before God

Right?!?!?! What do U think about Trump’s coronavirus turn? Where do we even go from here?! Sound OFF with your take on everything down in the comments (below)…