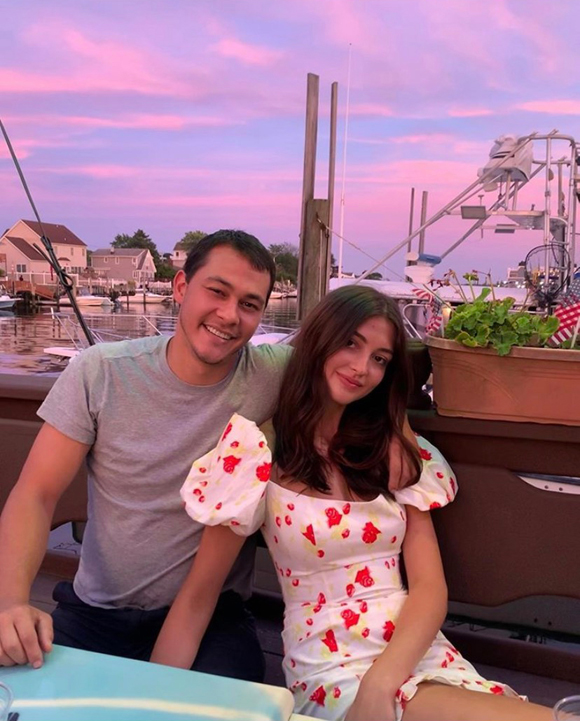 Getting dumped is bad enough — but having your fiancé’s celeb PDA plastered all over the tabloids before the dust has even settled is a whole different ball game.

And that’s just half the story of Rachel Eammons, who was engaged to Emilio Vitolo Jr. before he embarked upon a smooch tour of New York with Katie Holmes. And by before we mean right before, as in, the breakup allegedly happened the same day that the first photos of Katie and Emilio hit the internet. And via TEXT MESSAGE!

It sounded like a nightmare scenario to us, but the details only get more grim. You suddenly get a breakup text from the man you’re supposed to marry and have no idea what’s going on — then within hours you see pics of him making out with Joey from Dawson’s Creek!

“Rachel moved out of their apartment on September 2 with only what she could carry with her. She left her engagement ring and all her furniture behind. She then saw the photos of Emilio and Katie as she was flying home to Oklahoma.”

“Emilio still hasn’t reached out to Rachel. She’s okay — keeping her head up, trying to handle all of this with grace. She’s working on her business and plans to return to New York soon.”

If she’s displaying grace here, she’s the only one!

Meanwhile, insiders close to the blossoming romance have maintained that there was no infidelity going down, unlikely as it may seem. A source close to Katie called the relationship “organic,” saying:

“This was not planned… Katie had nothing to do with Rachel and Emilio’s split.”

Sorry, but we’re calling BS. Even if you didn’t technically hook up before hitting “SEND”, you don’t make out publicly with someone within hours of a breakup and claim the two events are unconnected.

Just because this relationship “wasn’t planned” doesn’t mean it wasn’t shady as hell. According to Page Six, the pair met around 9 months ago, and the Disturbing Behavior alum helped get the aspiring actor cast in a “romantic short film” in August… BEFORE he broke up with his fiancée. And you’re trying to tell us she had “nothing to do” with the breakup???

A friend of Vitolo’s reiterated the hard-to-believe sentiment. They explained:

“He did not break up with his fiancée for Katie. They had major issues that were insurmountable. He did break up with her, though, and their friends were shocked.”

Related: Demi Lovato Talks Getting Rid Of People Who Don’t Respect Boundaries — And Ex Max Ehrich FINALLY Gets It!

Even if their issues were insurmountable, the fact that he broke up with her the same week — if not the same day, and allegedly via text — that he started publicly macking on Katie makes this story VERY hard to believe.

Though judging by the sheer amount of PDA they’ve been engaged in lately, this couple really doesn’t care what the world thinks!