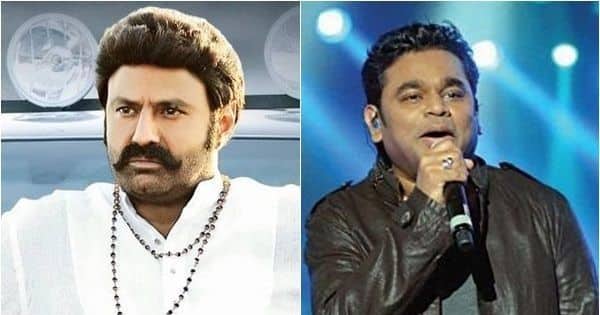 An interview of Telugu star Nandamuri Balakrishna has gone viral on the internet for all the wrong reasons. In the video, he has said that he doesn’t know who Oscar-winning music composer AR Rahman is, and adds that Bharat Ratna, India’s highest civilian award, is equal to the “toenail” of his father, late actor-politician NT Rama Rao. Also Read – What to watch on Netflix, Amazon Prime Video and SonyLIV: Army of the Dead, 99 Songs, Solos and more

“I don’t know who AR Rahman is. He won an Oscar and I don’t even know who he is. He gives a hit once in a decade,” Balakrishna said in an interview to the channel TV9. Speaking about Bharat Ratna, the actor said, “I feel that Bharat Ratna is equal to my father’s toenail. No award can compensate for the contribution of my family to Tollywood. So, only the awards should feel bad. Not my family or my father.” Also Read – What to watch on Disney Hotstar, Netflix, Hoichoi: 99 Songs, November Story and more

However, fans were not pleased with Balakrishna’s controversial statement on Rahman. They mercilessly trolled the actor, and started trending a hashtag ‘Who is Nandamuri Balakrishna’ on Twitter. Incidentally, Rahman had composed the background score of Balakrishna’s 1993 film, Nippu Ravva. Also Read – AR Rahman REACTS to Selena Gomez-Madonna’s wish to collaborate with him

How can a senior actor like #Balakrishna talk about Indian legend #ARRahman? Will people accept if a similar thing is being spoken by a Tamil actor on #Rajamouli? pic.twitter.com/ILMPDvjsVe

ARR is pride of Indian cinema and you not even worth for anything.

#Balakrishna didn’t know about #ARRahman is a good thing for #Rahman sir..
Else this comedian would have asked our Rahman sir to compose music for his crappy #Telugu movies.
Rahman sir is safe now..?#KwooddominatesIndia#KollywoodCinima #Balayya https://t.co/hgQxPZOH3A

#whoisbalakrishna
I think he himself doesn’t know who he is..?

Every music composer has his own version of composing the melodies based on the jonour of a movie same way #ARRahman has his own style and fan base #Balakrishna gaaru’s words on AR Rahman were so unpleasant and unacceptable. pic.twitter.com/mWervWFkMW

We don’t know Nandamuri Balakrishna. Who is he? Is he trying to get popular image using #ARRahman name? @arrahman#Balakrishna pic.twitter.com/1HqkaXsvAG

Soon, Balakrishna’s fans were out defending him, saying he was a hero of the masses and a charitable personality. It remains to be seen what Rahman has to say about Balakrishna’s remarks on him.

Dike Breaks in the Netherlands