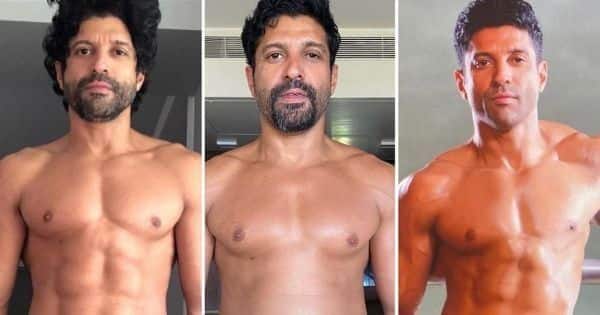 Farhan Akhtar took to social media on Monday and shared a glimpse of the preparation of his role in Toofaan. The actor shared pictures of the weight fluctuation he underwent for his character Aziz Ali in the film from 69 kilos to 85 kilos. Also Read – When Salman Khan won our hearts with his REACTION on ex-girlfriend Aishwarya Rai’s wedding with Abhishek Bachchan

“The many shapes and sizes of Ajju aka Aziz aka Toofaan. What a ride.18 months of relentless work but worth every drop of sweat, every sore muscle and every pound gained and lost. The stars behind the scenes –@samir_jaura @drewnealpt@anand.physio”, wrote Farhan on Instagram, tagging the team behind his look in the film. Also Read – RIP Dilip Kumar: Abhishek Bachchan REVEALS how he lost an opportunity to share screen space with father Amitabh Bachchan’s ‘idol’

In a single picture post, Farhan shared three shirtless stills in different body shapes along with the variations mentioned on the weighing scale — 69.8, 85, 76.9 kilos respectively. Also Read – Throwback Thursday: When Aishwarya Rai Bachchan addressed Salman Khan as ‘sexiest and the most gorgeous man’

Minutes after Farhan Akhtar posted his transformation pictures, he received comments from Bollwyood.

The sports drama Toofan released recently on OTT. Directed by Rakeysh Om Prakash Mehra, the film casts Mrunal Thakur as Farhan’s love interest and Paresh Rawal as his coach. It has got mixed reactions from fans and critics.

Meanwhile, post the trailer launch of the film, during a round table, Farhan Akhtar was asked whether he had the chance to show or share anything related to the film to the legendary athlete Milkha Singh, who passed away recently because of COVID-19, Farhan mourned his loss and replied, “I showed him the first poster when it had come out. I shared with him everything that was possible at that point of time.” He added, “None of us expected him to fall sick. None of us expected his wife to fall ill. All of it came as a major shock to all of us. I do feel sad.”

Guillain-Barré Syndrome and the Johnson & Johnson Vaccine: What to Know