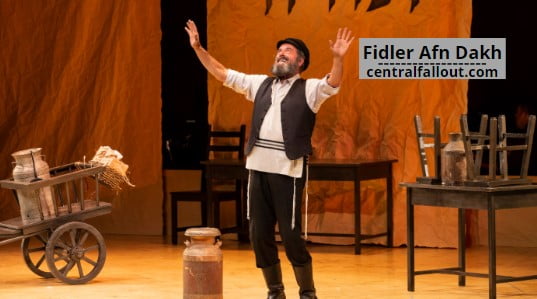 The outbreak caused a production in which Steven Skybell played Tevye to be cancelled, so he spent downtime studying Yiddish music.

Every Jew with acting proclivities has probably participated in a performance of “Fiddler on the Roof” at some point.

I performed Chava, the middle child of Tevye, the main character of the piece, during my first year of college.

Shraga Friedman translated and adapted the musical Fiddler on the Roof into the Yiddish language as Fidler Afn Dakh.

The adaptation revisits the Tevye the Dairyman collection of Yiddish short stories from 1894, which served as the inspiration for Fiddler on the Roof.

For an Israeli production from 1965, Friedman translated the script.

The National Yiddish Theatre Folksbiene (NYTF) staged it in New York City in 2018, and Stage 42 off-Broadway hosted it the following year.

Skybell’s career will later include a significant amount of “Fiddler.” The all-Yiddish “Fiddler” performance of the New York Theatre Folksbiene, which opened in 2018 to rousing acclaim and ended suddenly at the start of the coronavirus outbreak, cast Skybell, a seasoned Broadway performer, as Tevye.

The show is scheduled to reopen off-Broadway at New World Stages on Nov. 13 with Skybell reprising his recognisable role as pandemic restrictions loosen and theatres reopen.

Before the pandemic in 2018, but 35 years after our run as college co-stars, I saw Yiddish “Fiddler” for the first time.

I was moved to tears by Skybell’s profoundly moving performance, delivered in Yiddish with apparent ease. Backstage, I gave him my congratulations, but I didn’t see him again until a retreat for the Sami Rohr Jewish Literary Institute in June 2022, when he was invited to perform for the judges and fellows.

The retreat brings together the institute’s literary prize recipients, finalists, advisors, and judges. (I assess fiction.)

It turns out that Skybell continued his Yiddish research into the rich musical history of the language after “Fiddler” ended in 2020.

My late Grandma Esther used to soothe me and my siblings to sleep with “Roshinkes mit Mandlen” (“Raisins and Almonds”).

Her four sisters, my late great-aunts Molly, Helen, Pearl and Belle, used to feed us and squeeze us while humming Yiddish lullabies; their Eastern European accents are still thick in my ears.

I remember my mother humming the ballad her mother sang to her: “Oyfn Pripetchik,” or “On the Hearth.”

Sometimes Jewish geography is as magical as it is predictable. It wasn’t just that Skybell and I had once shared a college stage, along with my twin sister.

(She played Fruma-Sarah, the butcher’s late wife, back from the dead.) It wasn’t that more than three decades later, a literary prize that aims to lift Jewish storytelling tossed me and Skybell’s brother Joseph together.

Since the start of the outbreak, Skybell has worked closely with Zalmen Mlotek, the long-time artistic director of the Folksbiene Theater in New York, to rigorously research, translate, and rehearse Yiddish melodies.

Mlotek, an expert on all things Yiddish, accompanied Skybell jovially on the piano during this specific performance, occasionally assisting with the history of a song.

Skybell sought out Mlotek to learn and sing in Zoom sessions when Covid was under lockdown.

Mlotek, 71, had more than enough qualifications and background to act as his mentor. He once astounded Leonard Bernstein with his conducting abilities.

He is the son of two well-known Yiddish performers. He and Skybell became friends while he was the musical director of the Yiddish “Fiddler” play more recently.

Together, the two worked on Zoom until they had a catalogue of more than 100 songs. Skybell told us that the music heightened his ingrained Jewish pride, particularly during a time when anti-Semitism was on the rise.

His personal net worth is estimated at $26.5 billion. Owner of multiple fan tokens by Socios.com are an example of that.

For gamers who want to eat as fresh as they look, there is DoorDash x FaZe Subs.