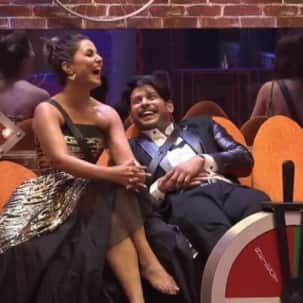 One of the things being discussed on social media in Bigg Boss 14 is the chemistry between Sidharth Shukla and Hina Khan. Fans are absolutely loving the friendship. #SidHina has become one of the tags of the season. From discussing marriage plans to something as trivial as morning bowel movements, the two are bonding and how. In fact, Sidharth Shukla and Gauahar Khan have also formed a warm camaraderie. Hina Khan has been teasing Sidharth Shukla a lot inside the house. He does not seem to mind it. We saw the warm vibes from the premiere night itself. Hina Khan, the runner up of season 11 is a hugely popular star. Also Read – Bigg Boss 14: Find out how Hina Khan left Sidharth Shukla kind of unimpressed — watch video

The first Weekend Ka Vaar is coming. While Sidharth Shukla will be wearing a striped suit for the episode, Hina Khan will be seen in a lacy top with black bell bottom pants. In the live feed, we can see Hina telling him that Gauahar Khan manages to get ready quite fast unlike them. She says they are ‘Nalle’ in comparison. When Sidharth Shukla sees Hina Khan in the Weekend Ka Vaar costume, he says she could have done better. Hina Khan has a smile on her fact after hearing that. Their banters are providing immense entertainment. Also Read – Bigg Boss 14: Shehnaaz Gill FINALLY opens up about her plans on going inside the house — watch video

Last season we only saw whatever was served to us…..This season we see the unfiltered reality of everyone!!This kind of language and gestures for someone you know for less than a week ?????#SidNaaz #ShehnaazGill #AsimRiaz #RashamiDesai pic.twitter.com/2WYZanDok5

We really want to see Hina Khan and Sidharth Shukla together in a project. They have a warm effortless chemistry that is pleasing to the eye. There is a lot of talk about who will be the actress opposite Sidharth Shukla in Broken But Beautiful 3. That is the hunk’s next big project post Bigg Boss 14. Last night was not a good one as he lost his cool on Shehzad Deol. This happened after he snapped at him for ruining Nikki Tamboli’s chances in the immunity task. Later, Sid qualified Nikki Tamboli as he felt she was hard done by. Also Read – Bigg Boss 14’s Shehzad Deol is indeed the most handsome Sardaar — view pics