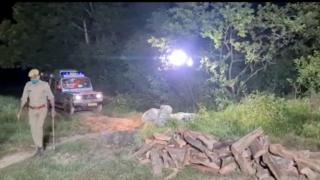 The family of a woman who died after she was gang-raped has accused police officials of cremating her body without their permission.

She was grievously injured and died in a Delhi hospital on Tuesday after fighting for her life for two weeks.

Activists say police must explain why they took the “inhumane decision”.

Her attackers have been arrested and a fast-track court has been set up to immediately begin hearing the case.

Local journalist Abhishek Mathur, who witnessed the cremation from a distance, told the BBC that the police kept her family and media away from the funeral pyre.

Her body was brought to their village in Uttar Pradesh state around midnight. The victim’s brother said that police officials were putting pressure on the family to cremate her immediately.

“When we refused, they took the body in an ambulance and cremated her,” he said.

A senior district administration official, however, denied the allegation, saying the family’s consent was taken.

Mr Mathur said the victim’s mother wanted to take her body home for rituals before the last rites, but her request was denied.

“Police had formed a human-chain to stop the protesting crowds, the family and the media from getting close to the cremation spot,” he added.

The victim’s brother said some police officers were rude to them.

“They took the body away without our permission, without the permission of my parents and cremated her. We didn’t even get to see her one last time,” he said.

Police officials have not made a statement about the allegations.

Her death has sparked anger across the country. Dalit activists have shut down the main market in Hathras and are demanding action against police officers.

They are also angry with the way police handled the investigation.

The victim’s brother said that no arrests had been made in the first 10 days after the incident took place. “She was left for dead. She fought for her life for 14 days,” he said.

Several opposition leaders have condemned the incident, calling it “insulting and unjust”.

Dalits are some of India’s most downtrodden citizens because of an unforgiving Hindu caste hierarchy that condemns them to the bottom of the ladder. Despite laws that protect them, discrimination remains a daily reality for the Dalit population, thought to number around 200 million.

On Twitter, the victim’s death is among the top discussion trends, with many calling her the forgotten Nirbhaya, a reference to the 2012 gang-rape and murder of a woman in Delhi that shocked the world.

The 23-year-old physiotherapy student was named Nirbhaya – the fearless one – by the press as she could not be named under Indian law.

Rape and sexual violence have been under the spotlight in India since the 2012 Delhi attack, which led to huge protests and changes to the country’s rape laws. But there has been no sign of crimes against women and girls abating.