How To Do Transit Advertising Right?
Advertisement 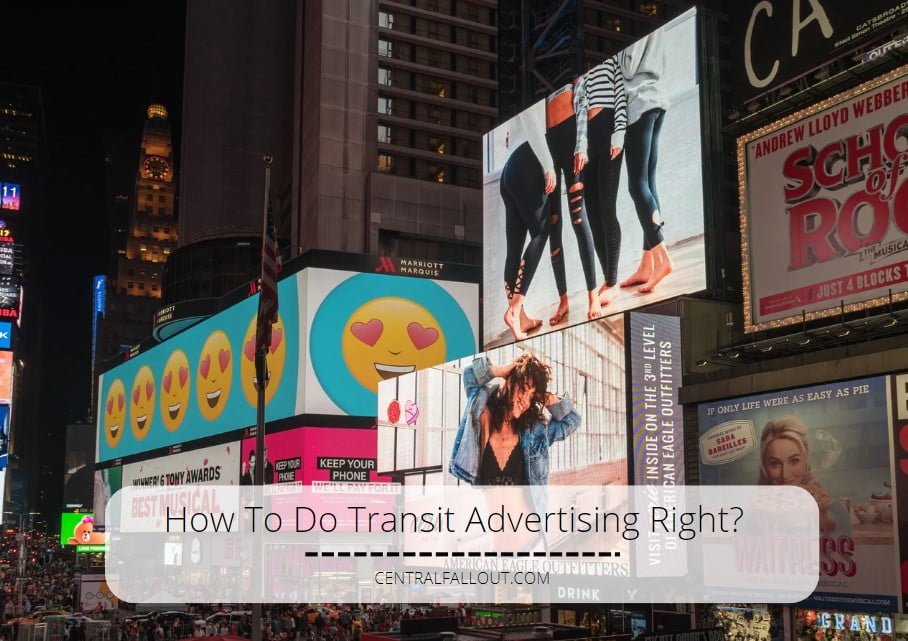 How To Do Transit Advertising Right?: If you are planning to advertise for your business, you may be considering a few options. One of those things may be transit advertising. We’ll explain what it is and how you can use it to your advantage in this guide.

The challenge with transit advertising may be choosing the right places. This can be in taxis, subway stations, or buses among other places. You’ll be getting the attention of commuters and travelers.

So you want to make your messaging count. Because that bus or train may have a few seconds to capture your attention before it leaves for the next destination. With that said, let’s take a look at how you can do transit advertising right.

Of course, the first course of action would be to choose the market. Your local market that is. If your business is in that location, you’ve already got half of the work done.

Depending on the city you’re in, the size of the market will be small or large. Cities like New York, Chicago, or Los Angeles have the largest media markets in the country. Then you have the small market cities such as Akron, Louisville, or Birmingham.

Transit ads come in a ton of different formats. As mentioned, you have bus advertising, taxi advertising, subway ads, shelter ads, and more. Your goal will be to choose the format that your target audience will respond to.

You’ll want to know who your demographic is along with their usual form of commute. A bus ad will be effective for those who travel by bus. Those who don’t take the bus can still see the transit ads (assuming they are stopped or slowly passing through).

Numbers don’t always lie. So it’s important to know which ones will be important. For example, you’ll want to take a look at your budget.

How much money will you need to spend to reach a certain percentage of the population? Your ad won’t reach everyone. Plus, everyone will not be your ideal customer.

The larger the market, the more expensive it will be. You can expect to pay an average of $5000 per month in a medium-sized city compared to double the price in large cities.

When it comes to advertising, the time period is vital. How long are you planning on running the ad for? Most of the minimum time periods will be four weeks (with 12 weeks being the maximum).

Timing is everything when it comes to your ad campaign. Let’s say you are a jewelry store. You are planning a big sale for Valentine’s Day.

Of course, you want to launch your ad campaign four weeks prior to Valentine’s Day. This will get people into your store to buy the gifts they want to give to that special person. By this point, you should have everything planned and set to go by mid-January.

If you are doing a Christmas sale, the longer time period might make a bit of sense. You can launch around November and it can run through the entire holiday shopping season.

The point here is to plan ahead. Because if you do, you’ll have an edge over your competition. Keep in mind that the shorter the run period, the less you pay.

Review the advertising budget and see which time period will work best for you. It’s also important to make adjustments to your marketing budget over time. This way, you will need to get a headstart on some of the other ad campaigns.

Some may need to run longer than others. Others will only need a few weeks. Once again, this goes back to planning ahead.

Get the message right

This goes without saying. The right message and offer will hit perfectly if it’s in front of the right people. Sure, a lot of people will ignore the ad simply because it doesn’t appeal to them.

However, there will be other people that will see the ad and see that it appeals to them in some way. They’ll be at your business and find that product or service they need. Just like that, you have a paying customer.

Transit advertising is a great way to get the word out. Commuters may be waiting for the bus. They may also see an ad on the bus itself.

Either way, you want the ad to stand out. A nice clean design and an on-point message is what you need. If you are a business trying to advertise, it’s important to be strategic about it.

Think about who your audience is. How do they get from point A to point B? Which type of transit where your ad will appear?

This can take a bit of time to plan an ad campaign using transit. But once you get it down to a rhythm, it will be a lot easier.

Advertisement
Related Topics:Transit Advertising
Up Next