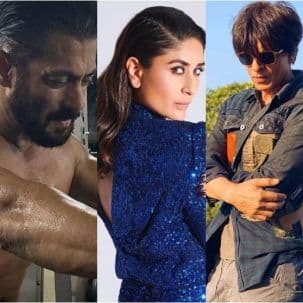 Kareena Kapoor Khan is always in the news. She is celebrating her birthday today with her close friends and family members. Of course, it is a special time as she is set to welcome one more member to her family after mini nawab, Taimur. Over the years, she has acted with a number of actors but most will agree that she looks the best with Bollywood’s A-Listers. Fans cannot forget the magic created by Hrithik Roshan and her in Kabhi Khushi Kabhie Gham or the energetic Chamak Challo from Ra.One with Shah Rukh Khan. On this occasion, let us know which superstar do you absolutely love to see with Kareena Kapoor Khan on 70 mm? Also Read – Happy Birthday, Kareena Kapoor Khan: Hrithik Roshan Shah Rukh Khan, Aamir Khan – which superstar’s pairing with the diva is the BEST? Vote Now

Shah Rukh Khan
Kareena Kapoor Khan and Shah Rukh Khan have teamed up for a number of projects. Both of them have immense screen presence and swag. Whether it was the hot chemistry between them in Asoka or the peppy Chamak Challo from Ra.One, people have adored them immensely. Also Read – Kangana Ranaut on Sushant Singh Rajput-Sara Ali Khan’s breakup: Even Kareena Kapoor went on record to say don’t date your first hero

Salman Khan
The superstar of Bollywood has delivered two of his biggest hits Bodyguard (2011) and Bajrangi Bhaijaan (2015) with the diva. They know each other since ages, so the comfort level transcends beautifully on screen. Salman Khan has had a tremendous track record with both Kareena Kapoor Khan and her elder sister, Karisma Kapoor.

Aamir Khan
Fans cannot forget Kareena Kapoor Khan as the confused but resolute Priya from 3 Idiots (2009) and the enigmatic Rosy from Talaash (2012). Kareena Kapoor Khan was effortlessly superb in both these films. In fact, Talaash is one of her most underrated performances. Aamir Khan and her will be seen together in the upcoming Laal Singh Chaddha.

Akshay Kumar
She has done the maximum number of movies with Akshay Kumar, and some of them are huge blockbusters. Their last project Good Newwz brought great tidings for the box-office in India and abroad. These two Punjabis know how to have a ball when they are paired together.