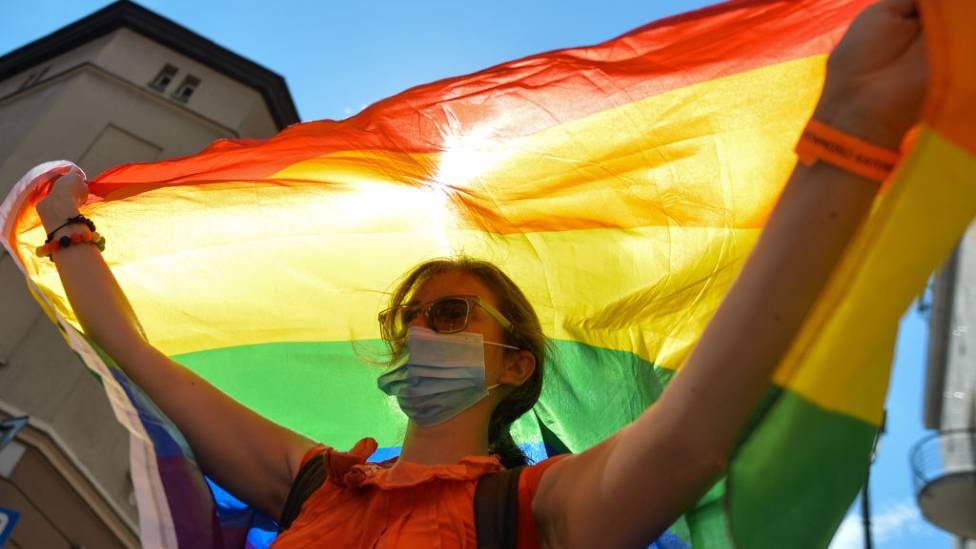 In Poland, dozens of small towns have declared themselves free of “LGBT ideology”. Politicians’ hostility to gay rights has become a flashpoint, pitting the religious right against more liberal-minded Poles. And gay people living in these areas are faced with a choice: emigrate, keep their heads down – or fight back.

Magazine editor Tomasz Sakiewicz shows me into his Warsaw office. To my surprise, he takes my hand – which I’ve just rubbed with the regulation disinfectant gel – and kisses it like an 18th-Century Polish nobleman.

Then he passes me a sticker that came free with his magazine, the right-wing weekly Gazeta Polska. It shows a rainbow flag with a black cross through it. “We gave out 70,000 of these,” says Sakiewicz. “And people congratulated us because we Poles love freedom.”

Some 100 towns and regions across Poland, nearly a third of the country, have passed resolutions declaring themselves free of “LGBT ideology”. These resolutions are essentially symbolic and unenforceable but they have provided fresh ammunition in Poland’s increasingly bitter culture war.

Sakiewicz tells me people should be able to have sex with whoever they choose and boasts that in some respects, Poland is progressive. It decriminalised homosexuality in 1932, decades before most European countries.

But he is against what he describes as “aggressive ideology promoting homosexuality”. The struggle for gay rights is a foreign concept imported from the US and Western Europe, he adds, and it threatens the traditional heterosexual Polish family.

Now in his 50s, Sakiewicz grew up in a Poland controlled by the Soviet Union when the government told people how to think, rejected Church influence and tolerated no dissent. Bizarrely, he now accuses LGBT campaigners of behaving in the same way.

“Communists used to wave the red flag and told people they were fighting for the poor, for the workers, for the peasants,” he says. “Now these activists hold up the rainbow flag and say they are fighting for sexual minorities. It was not true and it is not true. And since we lived through communist times we have a duty to tell others how dangerous such ideas can be.”

However far-fetched Sakiewicz’s ideas may seem, they are echoed by senior politicians and figures in Poland’s influential Catholic Church. In a campaign speech when he stood for re-election, President Andrzej Duda called the promotion of LGBT rights an ideology “even more destructive” than communism. The Archbishop of Krakow recently warned of a neo-Marxist “rainbow plague”.

With state-sanctioned homophobia and a largely hostile media, Polish gay people risk being pushed back into the closet, especially in small towns.

Swidnik, a couple of hours south-east of Warsaw, was the first municipality to adopt a resolution against “LGBT ideology”.

When I arrive on a Saturday morning, half a dozen gay activists are in the main square handing out leaflets, “love is love” stickers and iced doughnuts with multi-coloured sprinkles. Their spokesman, Bart Staszewski, has organised what he called a queer tour of Poland’s east to show people that gay people are “normal citizens”.

But on the other side of the street, there is a group of about 30 young men shouting themselves hoarse. “Swidnik free of rainbow propaganda,” they yell, trying to drown out the sound of the breezy pop music coming from the speakers of the gay rights activists.

One man, with a shaved head, tells me he doesn’t like the LGBT group’s message. “They don’t want to fit into our society,” he says. “And we don’t want them in this town.”

“They are weakening the nation,” says another. “And that’s the goal of Poland’s enemies. War’s no longer about tanks and missiles. You destroy a country by making chaos. And that’s what these gays are trying to do.”

Between the two groups, there’s a long line of riot police all wearing helmets and bullet proof vests and sweating in the hot sun.

“To be honest, I am glad the police are here”, says Staszewski. “We feel much safer.” He adds that many gay, lesbian, bisexual and transgender Poles have recently emigrated to escape persecution.

In Tuchow, a town of 6,500 people founded in medieval times, which has also declared itself free of “LGBT ideology”, I meet a gay teenager in a local park. Filip, not his real name, moved to the town from a more liberal-minded big city. His parents have no problem with his sexuality. And nor has Filip ever feared for his safety in Tuchow. Still, that doesn’t mean it is easy to be gay in this part of Poland, 100km east of Krakow.

“Once, when my boyfriend and I were holding hands”, he says, “we heard a few people shouting names at us.” Gay people in Tuchow, he adds, can only live in peace by staying “invisible”. If he hasn’t suffered from any bad experiences, it is because he is “a bit of a nerd” who spends much of his time playing video games in front of his computer.

At Sunday mass at the magnificent baroque shrine of the Blessed Virgin Mary, on a hill overlooking Tuchow, I meet Grazyna Karas. She’s a pillar of her community – fundraising for good causes and running a hotline and counselling service for local youth.

Later, back at her house over coffee, she tells me she tells me she fully backs the town’s resolution on “LGBT ideology”. She is also worried about what she sees as the pernicious influence of the World Health Organisation’s guidelines on sex education.

“Our young people are terrified about doing it – and they want to stop,” she says. “But they can’t – they don’t know what to do. So I refer them to a sexologist at a Church clinic.”

At this point, her husband Kazimierz interrupts to tell us that homosexuality is a sickness that can be treated.

“But it requires good will,” he says. “It is not as if you’re done for and you’re a homosexual for the rest of your life. Something can be done about it.” He recommends an American self-help book called “Coming Out Straight”.

With Poland’s birth rate now at its lowest since World War Two, Mrs Karas is also worried about demographics. “Homosexual unions do not guarantee the growth of our fatherland,” she tells me.

During his re-election campaign in June, President Duda signed a “Family Charter,” including pledges to prevent gay couples from marrying or adopting children and to ban teaching about LGBT issues in schools.

Grzegorz Niemiec, a local altar boy turned town councillor who voted for the Resolution against “LGBT ideology”, says he was also worried about sex education and wanted children to grow up in “normal families”. He said nobody on the Tuchow council was against the resolution, although three abstained from voting.

But in August the European Union’s Equalities Commissioner cried foul, saying that it went against EU values and fundamental human rights. Then came a rare punishment: Tuchow and five other towns were stripped of funding for their European town twinning programmes.

Niemiec tells me he was “very surprised” at the decision but is happy that the Polish justice minister has since compensated Tuchow with a cheque worth three times as much.

“The European Union is going to have to listen to our government,” he says. “Poland’s getting up off its knees and we can no longer be under the thumb of the Germans or the French.”

“Being yourself is not your ideology,” she told applauding MEPs in the European parliament in Brussels. “It’s your identity,” she said.

“So I want to be crystal clear – LGBTQI-free zones are humanity-free zones. And they have no place in our union.”

Back at the town hall in Tuchow, the mayor Magdalena Marszałek tells me her non-executive role prevented her from voting for or against the LGBT resolution herself. But she tells me she is not against gay people and was appalled when she received hate mail from all over the world. She’s since posted a long statement on Facebook in which she complains that Tuchow has become a pawn in other people’s games.

“I want our people here to understand that all this not about us, our life, our ceremonies. Rather, it’s that the political parties, the European Union – and the LGBT organizations – they’re all using Tuchow to pursue their own interests,” she says.

Some Polish politicians have stood up for gay rights. At President Duda’s swearing-in ceremony, 10 female MPs wore bright colours and rainbow masks. Some even held up copies of the constitution to show that they believe the president has violated the country’s legal protections.

But a number of gay activists feel let down by liberal politicians who have failed to take concrete actions. They say there’s no longer any point in campaigning peacefully against homophobia. As far as Małgorzata Szutowicz – a non-binary activist usually known as Margot – is concerned, the time for giving out stickers and doughnuts with a smile is over.

Stop Bzdurom – which means Stop the Nonsense – a radical, feminist, queer collective. In June a few of them got into an altercation with the driver of a truck that belonged to an organisation called Fundacja Pro, which is known for campaigning against abortion.

Now the conservative charity regularly sends trucks with loudspeakers attached around Polish cities with a message conflating homosexuality and sex education with paedophilia. “We don’t want our children to question their identity,” says their spokeswoman Anna Szczerbata. “We want them to grow up healthily and happily and not be abused by anyone.”

“Basically the message they’ve been blasting through those loudspeakers is that gays rape children,” says Margot, who has just been released from prison.

After an international protest, she is out on bail but still faces a seven-year sentence if convicted of charges of battery and criminal damage. Margot claims she only tried to stop the truck driver from filming them with his phone. “I wish I could have beat him up – but he was three or four times larger than me,” she laughs.

“I want to show my community that we no longer have to live in fear,” she adds. “For years we’ve been asking for minimal provisions and legislation that would protect us – if not from discrimination, then at least from physical violence.”

When I ask whether she advocates the use of violence herself, her mood changes and she replies with a string of expletives.

“People who have not lived the lives of the LGBT community in this country shouldn’t judge us,” she says angrily. “And nobody should be surprised if we are eventually forced to take things into our own hands.”

But the ultra-conservatives are also spoiling for a fight. A far-right organisation called All Polish Youth have vowed to “beat down the rainbow scum”, furious that multi-coloured flags had been hung on statues of Jesus and the Virgin Mary.

“I just read a post on Twitter that one of the gay activists has said that the time for peaceful struggle is over”, says Mateusz Marzoch protesting outside Warsaw’s university. “Well, they need to know that if they are taking the gloves off, our side won’t run off to hide. We’ll meet them head-on. And it’s going to hurt.”

So-called “gay conversion therapy” may be condemned by experts but it is still permitted in the UK. So what happened when gay podcast host James Barr signed up for simulated “treatment”?

The day I met a ‘gay conversion therapist’