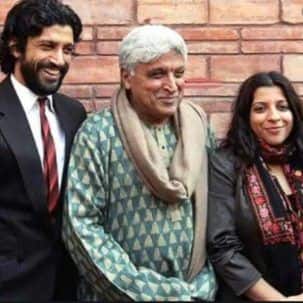 The NCB is probing the use of drugs in Bollywood. So far, actresses like Rakul Preet Singh, Deepika Padukone, Sara Ali Khan and Shraddha Kapoor were called by the NCB for questioning. Bollywood celebs are also being trolled for their alleged drug consumption on social media. However, many have questioned if the arrest of Rhea Chakraborty and her brother, Showik on the basis of alleged marijuana procurement is fair or not. Noted lyricist Javed Akhtar spoke to Barkha Dutt at length. He also discussed this issue. Javed Akhtar revealed how he did react if he found that his children, Farhan and Zoya are consuming marijuana. Also Read – Javed Akhtar reveals how would he react if his children Zoya and Farhan consumed marijuana

Javed Akhtar told Barkha Dutt, “I would tell them not to do it, it’s not right. But they are grown ups. It’s like when I gave up alcohol in 1991, and haven’t taken a sip since then. I used to drink everyday. I have come to the conclusion that if you have any kind of intoxication, it can harm you. Tomorrow if I come to know my daughter smokes marijuana, I’ll tell her she shouldn’t be doing this. If she listens to me that’s fine, but if she doesn’t, she’s a grown up girl. It’s the same with my son.” Also Read – Javed Akhtar on the insider vs outsider debate: I think people are confusing inheritance with nepotism

The lyricist said that he had not heard about anyone committing murder after consuming marijuana. He said that charas and ganja were ordinary items that could be found outside college campuses. Javed Akhtar said that no one should confuse them with cocaine or LSD. Farhan Akhtar refuted rumours that he gave a job to late Sushant Singh Rajput’s cook Neeraj. He told people not to believe anything that they read. Also Read – Kangana Ranaut takes a dig at Deepika Padukone, says, ‘Depression ka dhandha chalane walon ko public ne unki aukat dikhadi’