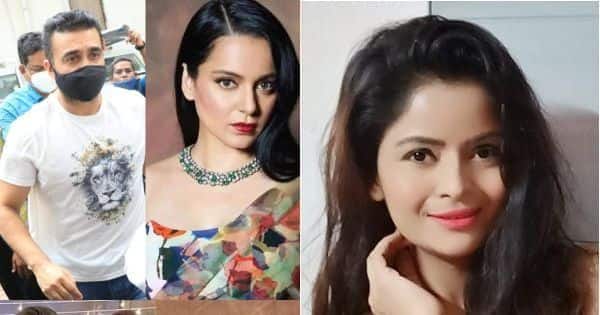 As the canopy of the night envelops another day, it’s time to look back at the biggest newsmakers from Bollywood who’ve made it to the trending entertainment news today. From Kangana Ranaut vowing to expose ‘Bullywood’ and Karisma Kapoor replacing Shilpa Shetty on Super Dancer 4 to Gehana Vasisth standing by Raj Kundra in their porn controversy, Sushant Singh Rajput’s sister expressing solidarity with Ankita Lokhande and Poonam Pandey reacting to Raj Kundra’s arrest – here’s all what grabbed headlines in Bollywood to make it to the trending entertainment news today… Also Read – Sushant Singh Rajput’s sister Shweta Singh Kirti RESPONDS to a fan who accused Ankita Lokhande of using SSR’s name for publicity

So, without further ado, here are the entertainment newsmakers of 20th July 2021:

It was yesterday that Shilpa Shetty’s husband Raj Kundra got arrested in a pornography-related case. Today, Kangana Ranaut reacted to it saying that she will expose many with her upcoming home production venture Tiku weds Sheru. Also Read – Worst dressed celebs of the week: Rashami Desai, Nia Sharma, Akanksha Puri’s fashion disasters will leave you with sore eyes

As per the latest update, Shilpa Shetty who judges Super Dancer Chapter 4 has skipped today’s shooting. This comes after her husband Raj Kundra was arrested in an alleged pornography-related case.

Actress Gehana Vasisth, or Vandana Tiwari, who was arrested by the Mumbai Police in February on allegations of shooting and uploading pornographic videos on her website, has come out in support of Raj Kundra.

When an online user questioned Sushant Singh Rajput’s sister, Shweta Singh Kirti, on why she still supports Ankita Lokhande who was allegedly using SSR’s name to promote her upcoming show, she gracefully handled the comment while extending her support to Ankita.

It can be recalled that Poonam Pandey had filed a case against Raj Kundra for sharing her number publicly with a ‘Call me, I’ll strip for you’ message. She alleged that Raj did this because she had refused to work with him.

Trump Organization expected to be charged with tax crimes