Bollywood actress Kangana Ranaut’s Twitter account has been suspended. The actress had tweeted against Mamata Banerjee. As we know, the ruling party faced a massive defeat in the West Bengal where the Trinamool Congress won by over 200 seats. Yesterday, some reports emerged that TMC workers had got into fights with BJP karyakartas and there was killing and bloodshed. A number of people from BJP and otherwise condoned the killings. So far, there is no verification if they are TMC workers or not. Kangana Ranaut had tweeted that she was very disappointed that the people of Bengal chose to vote out the ruling party. Also Read – SHOCKING! Kangana Ranaut likes a tweet that calls Sonu Sood a ‘fraud’, using the pandemic to make money 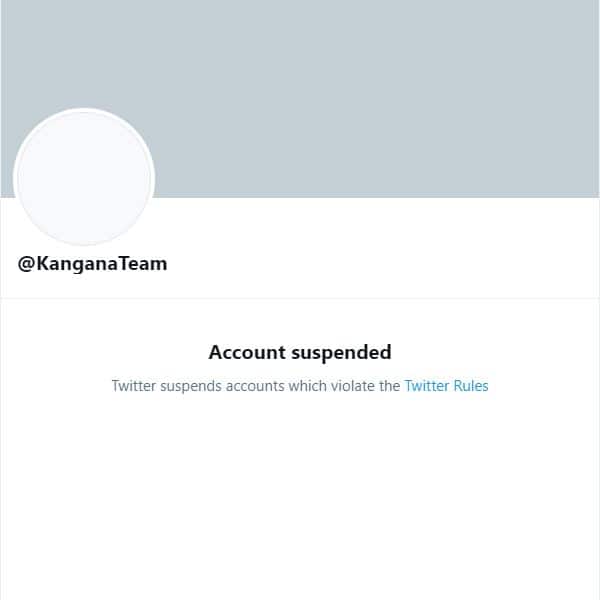 After seeing some videos of the alleged violence, Kangana Ranaut said that Narendra Modi should take on his ‘Virat’ roop to tame Mamata Banerjee. She had used hashtags like #DeathOfDemocracy, #BengalBurning and #PresidentsRule. Reading this, quite a few people were incensed. People asked her if she wanted a second Godhra like incident in the nation. The tweets did not go down with a number of people. She also tweeted that Mamata Banerjee’s alleged gundai should be handled with double gundai and urged PM Narendra Modi to show his Virat Roop. Also Read – Monday Memes: Kangana Ranaut’s unwarranted comparison with Shah Rukh Khan invites a hilarious meme fest

Hate monger #KanganaRanaut’s account has been suspended by @Twitter #Twitter. Well done @jack for doing this. She deserves it and doesn’t deserve to come back here to spit out more venom.

This is what got her suspended. Seems to be doing of IT Cell as such tweets could dent Supreme leader’s chances of getting Nobel Peace Prize #KanganaRanaut pic.twitter.com/adEYTjWeCl

Well, the actress has not spared anyone on Twitter. The platform has said that it has violated the abusive policy and promotes offline harm. Also Read – Kangana Ranaut didn’t regret turning down Vidya Balan’s The Dirty Picture – here’s why