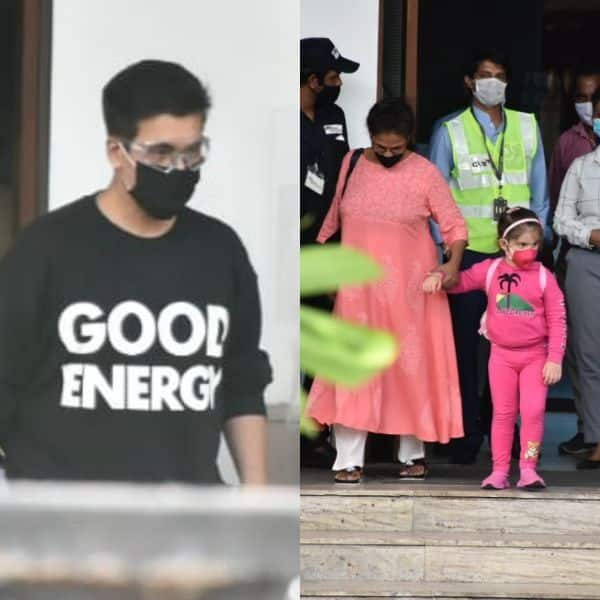 Karan Johar is back in town. The filmmaker made his way back to Mumbai amidst the whole chaos about Narcotics Control Bureau investigating Bollywood links to the drug cartel. He was in the news when Kshitij Ravi Prasad got picked up the NCB. It seems he was named by the peddlers, and even actress Rakul Preet Singh. Kshitij Ravi Prasad was described by all news channels as a close aide of Karan Johar. The filmmaker put out a strong statement saying that he does not consume nor does he encourage consumption of substances. Karan Johar said that Kshitij Ravi Prasad was not his close aide but worked shortly with him. Another guy called Anubhav Chopra also came under the scanner but he said that he was working with Dharma Productions two years back. Also Read – Karan Johar sports a ‘Good Energy’ tee as he is snapped at Mumbai airport returning from Goa

Karan Johar was seen wearing a black tee that had ‘Good Energy’ written on it. We guess it is very much needed seeing the negativity all over on social media. Karan Johar was seen at the private airport in Kalina with his mom, Hiroo and kids, Yash and Roohi. Also Read – Yash Chopra birth anniversary: ‘Perfect balance of traditional and modern is what defines YRF,’ Aditya Chopra pens a heartfelt note for his dad

Karan Johar put out a long message after rumours did the rounds. He said he would take legal action if people published defamatory articles without any proper verification. Also Read – No link between Karan Johar’s alleged ‘drug party’ video and case: NCB

A lot of celebs were in Goa of late. Deepika Padukone and Siddhant Chaturvedi were present for the shoot of Shakun Batra’s film. Sara Ali Khan, Ibrahim Ali Khan and Amrita Singh were vacationing there. The two ladies had to return to be present for the NCB summons.