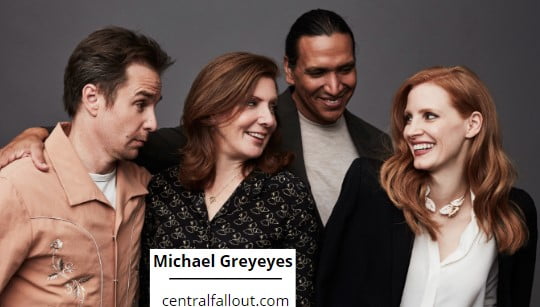 Michael Greyeyes is a Plains Cree actor and performer from the Muskeg Lake Cree Nation in Saskatchewan, Canada.

He has appeared in more than 50 movies and TV shows, including a number of roles centered on Indigenous leaders such as Sitting Bull and Gooch in Dance Me Outside.

Greyeyes first caught the performance bug when he was invited to join a ballet class when he was a child. His love of dancing and acting led him to pursue a career in the performing arts.

In the television movie Crazy Horse from 1996, Greyeyes played Crazy Horse. Sitting Bull was represented by Greyeyes in the critically acclaimed 2018 film Woman Walks Ahead.

He has also appeared on the TV shows True Detective, I Know This Much Is True, and Fear the Walking Dead. He played a significant part in the sitcom Rutherford Falls in 2021.

Greyeyes graduated in May 2003 with a Master of Fine Arts degree from Kent State University’s School of Theatre and Dance.

He graduated from The National Ballet School in 1984, and after serving as an apprentice with The National Ballet of Canada, he joined the company in 1987 as a member of the Corps de Ballet. He came to New York City to work with choreographer Eliot Feld after three years.

Many of Mr. Feld’s important works, such as Intermezzo, Skara Brae, and The Jig is Up, included Greyeyes. He danced in parts that were specifically written for him in ballets like Bloom’s Wake and Common Ground.

He oversaw the production of three significant works as artistic director and choreographer, including From thine eyes (Harbourfront Centre), Nôhkom (The Banff Centre), and A Soldier’s Tale (Fleck Dance Theatre), which explores the effects of war on soldiers and their families.

Co-produced by the National Arts Centre and the Canada Dance Festival, A Soldier’s Tale served as the festival’s opening performance at the NAC Theatre in Ottawa in 2014.

Installations and performance art pieces like Winter Home, which had its world premiere in Saskatoon, Saskatchewan, have also been developed by Signal Theater

Nancy Latoszewski, an American actress and dancer of Canadian descent, is best known as the spouse of Michael Greyeyes.
Her spouse was a lead dancer on the Bravo TV show “Dancing with Spirit,” where she made an appearance.

Since 2021, her husband Michael has played the title character of Terry Thomas in the American sitcom Rutherford Falls. Michael is an Indigenous Canadian dancer, choreographer, actor, and director.

Nancy Latoszewski and her husband Michael Greyeyes have been married for more than two decades now.

They reportedly got hitched on 20th May 1995 as reported by The Times Leader on 30 Apr 1995 that they were planning to marry on the mentioned date.

Their marriage ceremony was held on Nativity of Blessed Virgin Mary Church Plymouth.

As per some sources, Nancy met her future partner in 1990 while he was working at Eliot Feld’s company.

During that time, Michael had just moved to New York City from Canada to continue his career.

The pair has two daughters named Eva Greyeyes and Lila Greyeyes. Their first child Eva was born on May 5, 2002, while the second daughter was born on Oct 1, 2004.

Nancy Latoszewski married life with her husband Michael Greyeyes is going smoothly without having problems. Her husband is a Canadian actor, choreographer, director, and educator.

Also, her husband is popular for his role in movies like Fear the Walking Dead, Dr. Quinn’s Medicine Woman, Texas Ranger, the recent movie Woman Walks Ahead, and so on.

The couple met at Eliot Feld’s company in New York for the first time. The duo welcomed two kids, daughters Eva Rose Greyeyes born on 5th May 2005, and Lilia Frances Jean Greyeyes born in 2005, and a proud parent.

Nancy Latoszewski has an estimated net worth of around $200 thousand as of 2022.