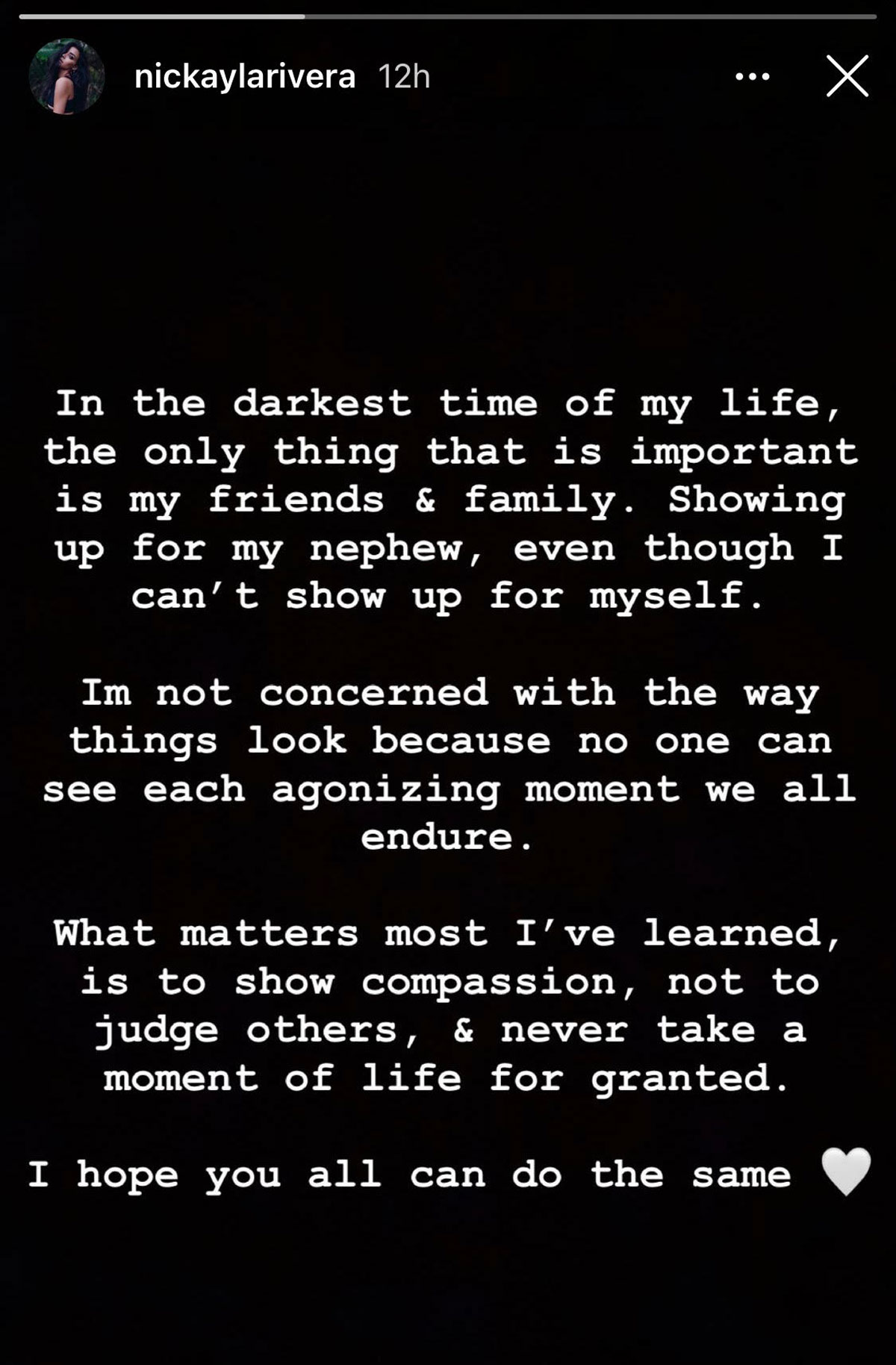 For those who might have missed it, Nickayla Rivera has been seen shopping with Ryan Dorsey on multiple occasions, including one outing where they were “playfully holding hands.” The pics, obtained by DailyMail.com, showed the pair looking “really comfortable,” with a source revealing they moved in together earlier this month to jointly care for Ryan and Naya’s 5-year-old son Josey.

Now, the 26-year-old model is responding to the headlines, saying outright that she’s “not concerned with the way things look.” In a Monday Instagram Story, Nickayla did not address her situation with the 37-year-old actor, but instead began by writing:

“In the darkest time of my life, the only thing that is important is my friends & family. Showing up for my nephew, even though I can’t show up for myself. Im [sic] not concerned with the way things look because no one can see each agonizing moment we all endure.”

Rivera concluded her message to followers, seemingly asking them for empathy during these difficult times:

“What matters most I’ve learned is to show compassion, not to judge others, & never take a moment of life for granted. I hope you all can do the same.”

While Naya’s sis wouldn’t confirm or deny her situation with Ryan, an ET source has admitted they are living together — but only so they can focus on “keeping things consistent” in young Josey’s life and care for his well-being. Sharing their relationship isn’t romantic, the insider continued on about how Nickayla immediately stepped in to help care for the little boy like she’s always done… but this time as the singer/actress went missing.

“Since the devastating loss of Naya, Ryan’s role in parenting has of course been amped up. He’s the primary caregiver, but has been relying very heavily on Nickayla. He would not be able to do this without her help and involvement.”

The two have made a “great team” alongside Josey in the rental home they share, but only as caregivers. Further explaining how there are no romantic feelings, the source confessed:

“They simply share the same goal — to give Josey the best childhood possible and to raise him the best they can without Naya. They’ve also found comfort in one another because they understand what each other is dealing with and they know how exhausting it can be to be grieving in the public eye while trying to keep it together for Josey.”

And so far, it seems to be working for the trio:

“All things considered, everyone is doing really well. Josey is a very happy, sweet and playful boy. And, Ryan and Nickayla have also found many moments of joy and lightness in this tough time. Some days are harder than others, but overall everyone is doing well!”

We all grieve in different ways after losing a loved one, and it’s really endearing to see those closest to Naya coming together to raise her son.