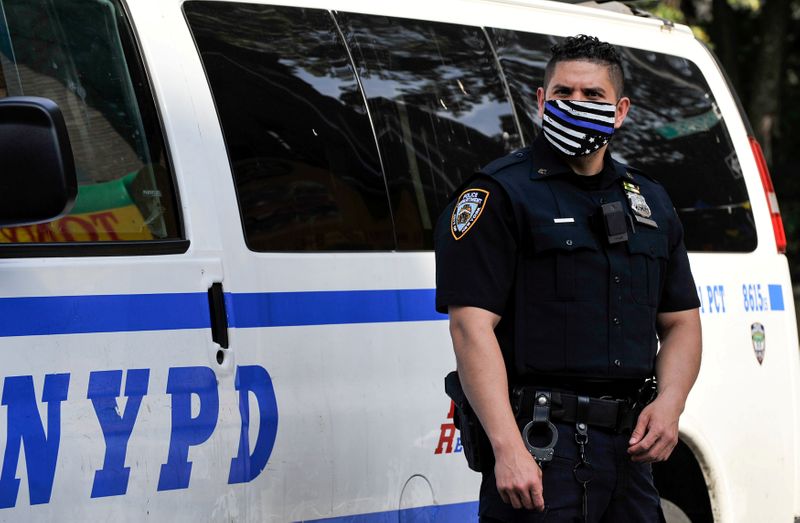 © Reuters. A NYPD police offer wears a Blue Line facemask at the scene of a shooting

NEW YORK (Reuters) – The New York City Council voted to pass the 2021 budget on Tuesday with cuts to police funding after weeks of fraught negotiations with Mayor Bill de Blasio, but some lawmakers complained it fell short of a $1 billion cut they and protesters demanded.

The austere, coronavirus-era budget tightens spending across city agencies, including a cut of nearly $484 million from the New York Police Department’s $6 billion operating budget if the department can adhere to new overtime limits, the council said.

Another $354 million of police funding will be transferred to other city agencies, most prominently in the mayor’s agreeing to shift oversight of school safety officers from the NYPD to the Department of Education, the council said.

After many hours of delays, a majority of 26 lawmakers voted via teleconference to pass the budget, although voting continued as the midnight deadline passed, with at least 13 voting against it. Outside an empty City Hall, more than 1,000 protesters demanding the shrinking of a police department they decry as violent and racist continued a week-old encampment.

City Council Speaker Corey Johnson disputed de Blasio’s characterization that $1 billion was being “shifted away” from the NYPD budget, saying the mayor and some council members refused to agree to a police hiring freeze.

“I know that there are many who are disappointed,” he said before the vote. “I am disappointed as well. I wanted us to go deeper.”

He nonetheless urged members to pass the budget: “Today’s budget agreement is one of necessity,” he said.

The budget negotiations were shaped by two crises that have shaken the city.

The coronavirus pandemic has killed more than 23,000 city residents and created a $9 billion shortfall in revenue, leading to deep cuts across city agencies, with the mayor warning he may have to lay off 22,000 municipal workers.

And a month of nationwide protests against police violence gave new political heft to calls to defund police departments, forcing de Blasio to shift from his original April proposal of cutting NYPD funding by less than 1% while slashing youth services.

In May, George Floyd, a Black man, was killed when a white Minneapolis police officer knelt on his neck while arresting him on suspicion of spending a fake $20 bill, sparking one of the largest protest movements seen in the country in decades.

“It’s time to do the work of reform, to think deeply about where our police have to be in the future,” de Blasio told reporters earlier on Tuesday.

“Are there going to be critics on all sides? Of course. But I’m convinced this is real change.”

He has opposed reducing the number of officers patrolling the city, saying he fears it would lead to rising crime.

The cuts include the cancellation of the July enrollment of what would have been more than 1,100 new recruits, though another class will be enrolled in October.

The City Council said the budget included an effort to reduce overtime pay by $352 million, although previous efforts to cap NYPD overtime have failed.

The mayor said he would also restore some summer youth programs he had originally canceled.

Communities United for Police Reform, a coalition of 200 community groups that originally called for a $1 billion cut to the NYPD’s budget and have criticized police officers patrolling public schools, said their demands were still not being met.

“Mayor de Blasio and Speaker Johnson are using funny math and budget tricks to try to mislead New Yorkers,” Anthonine Pierre, a spokesperson for the coalition, said in a statement. “Moving police from the NYPD to other agencies does nothing to reduce police violence.”

Trump calls on Wallace to apologize after probes of noose, cites ‘hoax’ By Reuters