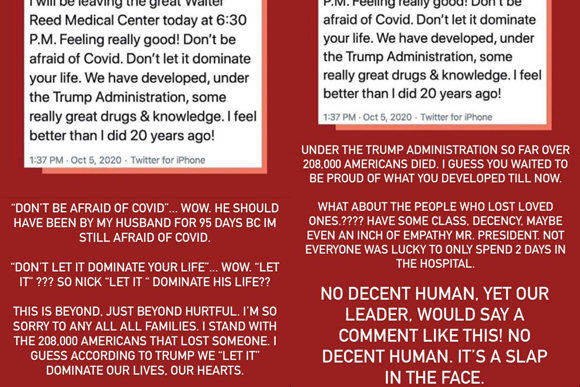 We’re almost certain the last thing Amanda Kloots wanted on the three-month anniversary of Nick Cordero‘s death from coronavirus was to rip Donald Trump a new a**hole on social media, but he definitely had it coming.

The fitness instructor took to Instagram on Monday and shared a series of posts where she slammed the President’s insensitive tweet telling Americans, “Do not be afraid of Covid,” just hours before he was discharged from Walter Reed National Medical Center.

As you’ll recall, Cordero died in July at the age of 41 after a 95-day battle with COVID-19, so it’s not hard to see why his grieving widow found POTUS’ words “beyond hurtful” and “disgraceful.” In case you missed it, you can see Trump’s despicable message (below):

I will be leaving the great Walter Reed Medical Center today at 6:30 P.M. Feeling really good! Don’t be afraid of Covid. Don’t let it dominate your life. We have developed, under the Trump Administration, some really great drugs & knowledge. I feel better than I did 20 years ago!

Ugh, how gross! Only a narcissistic, crazy person would speak about recovering from a deadly virus that has claimed the lives of hundreds of thousands under his watch while he got access to a level of healthcare that most of his citizens could never afford. And based on his shady tax returns, he likely wouldn’t be able to either without holding office. SMH. EVERYONE should be offended by this!

Kloots reacted to the shocking tweet on her IG Story, where she called DJT’s message a “slap in the face” and challenged him to show some “class” and “decency,” which, apparently, is a lot to ask for from our nation’s leader.

She continued responding to it in a series of video messages, telling her followers:

“I’m honestly not a very political person, but this is really kind of hard to ignore. I’m sitting here in my house and I’m honestly frozen. I can’t even move. I couldn’t believe what I read. Not everyone’s lucky enough to walk out of the hospital after two days. So we saw what this disease can do, so guess what, we are afraid, we are. I still am. I think about if I got it, if I got as sick as Nick, little Elvis, he doesn’t have his mom anymore. So I’m afraid.”

She fought back tears as she continued:

Amanda concluded by challenging the President to rethink his public response to the coronavirus while many are still suffering from it:

We couldn’t have said it any better ourselves, but again, it’s ridiculous that any of this ever needed to come out in the first place. She also shared a campaign ad from Democratic nominee, Joe Biden, writing, “@JoeBiden you have my vote and by god I hope and pray you win this election.”

Kloots continued reacting to the triggering tweet on her feed, reposting it again along with another heartbreaking plea about what it was like watching her late husband fight for his life:

“I cried next to my husband for 95 days watching what COVID did to the person I love. It IS something to be afraid of. After you see the person you love the most die from this disease you would never say what this tweet says. There is no empathy to all the lives lost. He is bragging instead. It is sad. It is hurtful. It is disgraceful.”

Prior to her response to the president, Kloots posted a photo with her late husband, marking the anniversary of his death. She wrote in part:

“Nick passed away three months ago, but COVID took my husband April 1, which is seven months ago. I realized that the other day, Elvis and I lost him seven months ago. Once he went on the ventilator he never came back. It’s weird to think we’ve been on our own for that long already. Please wear a mask. Please continue to take this seriously. ❤️”

We are sending so much love to Amanda, her sweet boy Elvis, Nick’s extended family, friends, and loved ones — this no doubt added salt to an already open and healing wound. And to anyone else out there who’s lost someone to the virus or is currently battling it, we genuinely keep you in our thoughts.

Perezcious readers, we know leadership is scarce these days, but please take this pandemic seriously.