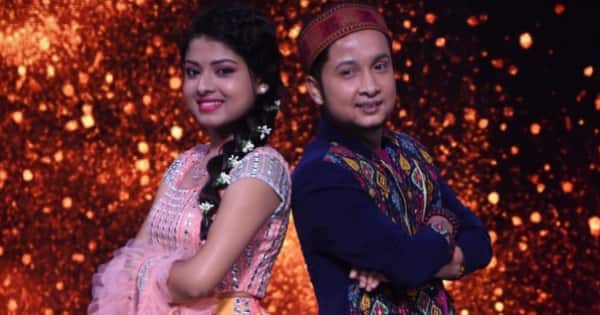 Indian Idol 12 is currently the most watched show on television. This season of the reality show has become quite popular and is being loved by the audience. However, along with this fame, Indian Idol 12 has received a lot of negative comments for the unnecessary drama they have been creating in the show. Many of the show’s fans have been speculating that Pawandeep Rajan or Arunita Kanjilal will be the winner of this season. They both have a massive fan following on social media. However, a recent incident on the sets of Indian Idol 12 give a different picture. Indian Idol Season 12 is all set to mark the presence of the legendary lyricist, shayar and poet Javed Akhtar in an episode themed ‘Tribute to Javed Saab.’ Javed Akhtar, who will be seen interacting with the contestants and giving them guidance on their singing techniques, takes particular notice of contestant Shanmukhapriya. Also Read – Indian Idol 12: From Shanmukhapriya crushing on Javed Akhtar to Pawandeep Rajan-Arunita Kanjilal waltzing on stage – 5 MAJOR aspects to watch out for in the upcoming episode

Shanmukhapriya is seen gushing with a big smile when she realizes that Javed Akhtar has heard her yodeling. Host Aditya Narayan will also be seen sharing how he wants to do a concert with her. Not just this, a lot of fans who have been trolling Shanmukhapriya have changed their views and feel that she should win this season of Indian Idol. Shanmukhapriya is known for her variations. She also sings in a very high-pitched voice. Shanmukhapriya sang a couple of numbers like Chori chori from Kareeb and Senorita from Zindagi Na Milegi Dobaara. However, fans have trolled her and called her out for her loud voice. They even said that she should be removed from the show. Earlier, in an interview with Yo!Vizag, Shanmukhapriya reacted to this trolling. Also Read – Indian Idol 12: Pawandeep Rajan, Arunita Kanjilal, Shanmukhapriya and others get vaccinated – view pics

She said that she came to know about the happenings only after a few of her well-wishers reached out to her. She tried to take the trolls with a pinch of salt. Shanmukha Priya’s mother Ratnamala has been her constant support in the show. She has also reacted to these trolls. She said, “Shanmukha is trying to experiment with genres. As far as the choice of songs is concerned, all the contestants in Indian Idol perform the tracks given to them by the showrunners. Despite receiving criticism, she has been fortunate to get double the love and affection from the viewers.” Also Read – Trending TV news today: Indian Idol 12’s Sawai Bhatt’s emotional note, Sunil Grover’s reason for not doing The Kapil Sharma Show and more

England vs. Italy: How to Watch the Euro 2020 Final