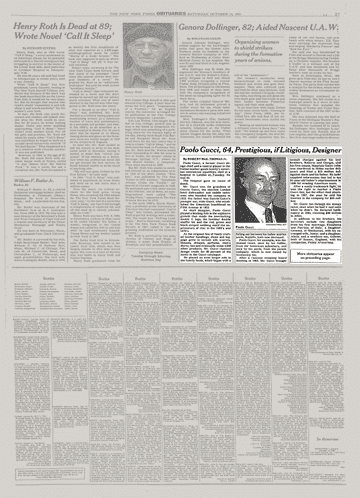 This is a digitized version of an article from The Times’s print archive, before the start of online publication in 1996. paolo Gucci To preserve these articles as they originally appeared, The Times does not alter, edit or update them.

Occasionally the digitization process introduces transcription errors or other problems; we are continuing to work to improve these archived versions.

Paolo Gucci, a former Gucci design chief and a central player in the Italian leather goods family’s notorious internecine squabbles, died at a hospital in London on Tuesday. He was 64.

The hospital gave no cause of death.

Mr. Gucci was the grandson of Guccio Gucci, the one-time London hotel dishwasher and saddle salesman who founded the company in 1923. His father was Guccio Gucci’s younger son, Aldo Gucci, who established the American beachhead on Fifth Avenue in 1953.

As chief designer, paolo Gucci played a leading role in the explosive growth that made the interlocking double G logo, the familiar double snaffle bit, and the red, green, and black striped webbing motif the imprimaturs of chic in the 1960s and 1970’s.

As the original line of finely crafted leather handbags, shoes and luggage grew to include silk scarves, blouses, dresses, perfume, men’s shirts, ties, and eventually some 4,000 other products, Mr. Gucci claimed design credit for 80 percent of the items in the Gucci catalog.

He played an even larger role in the family feuds, which began with a falling out between his father and his uncle, Rodolfo, both now deceased.

Paolo Gucci, for example, was dismissed twice, once by his father, from the American subsidiary, and once by his uncle, from the parent company, which is now owned by Investcorp Inc.

After a raucous company board meeting in 1982, Mr. Gucci brought assault charges against his two brothers, Roberto and Giorgio, and his first cousin, Maurizio Gucci (who was murdered in Milan earlier this year) and filed a $13 million suit against them and his father. He later supplied information that led to his 81-year-old father’s imprisonment in 1986 for evading American taxes.

After a costly trademark fight, he won the right to market a Paolo Gucci line, but the effort died aborning in 1987, the year he sold his interest in the company for $45 million.

Mr. Gucci ran through the money twice, once when he had it and once when he didn’t. He declared bankruptcy in 1993, claiming $90 million in debts.

In addition to his brothers, his survivors include two daughters from his first marriage, Elizabetta and Patrizia, of Italy; a daughter, Gemma, of Manhattan, with his estranged wife, Jenny; and a daughter, Alicia, and a newborn son, Gabriel, both of Sussex, England, with his companion, Penny Armstrong.

6 New Yorkers Share Their Reasons for Getting septum piercing