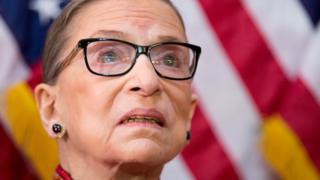 US Supreme Court Justice Ruth Bader Ginsburg, who has died of cancer at the age of 87, was a passionate, astute and outspoken advocate of women’s rights, civil liberties and the rule of law.

As serious as she was about these subjects, she also had a way of highlighting critical issues with humour, embracing her nickname “Notorious RBG” and commenting that she and rapper Notorious BIG had something in common: “We were both born and bred in Brooklyn, New York.”

Here, we look back at some of Ginsburg’s most memorable quotes on gender equality, law and being remembered.

On gender equality and sex discrimination:

– The pedestal upon which women have been placed has all too often, upon closer inspection, been revealed as a cage.

– I ask no favour for my sex. All I ask of our brethren is that they take their feet off our necks.

– When I’m sometimes asked when will there be enough [women judges on the US Supreme Court bench] and I say, ‘When there are nine,’ people are shocked. But there’d been nine men, and nobody’s ever raised a question about that.

– Women belong in all places where decisions are being made. It shouldn’t be that women are the exception.

– Women will have achieved true equality when men share with them the responsibility of bringing up the next generation.

– I pray that I may be all that [my mother] would have been had she lived in an age when women could aspire and achieve and daughters are cherished as much as sons.

On law and her career:

– I became a lawyer for selfish reasons. I thought I could do a lawyer’s job better than any other.

– When contemplated in its extreme, almost any power looks dangerous.

– A constitution, as important as it is, will mean nothing unless the people are yearning for liberty and freedom.

– Each part of my life provided respite from the other and gave me a sense of proportion that classmates trained only on law studies lacked.

– Dissents speak to a future age. It’s not simply to say, ‘My colleagues are wrong and I would do it this way.’ But the greatest dissents do become court opinions and gradually over time their views become the dominant view.

On being an inspiration and on being remembered:

– Fight for the things you care about, but do it in a way that will lead others to join you.

– I just try to do the good job that I have to the best of my ability and I really don’t think about whether I’m inspirational. I just do the best I can.

– Reading is the key that opens doors to many good things in life. Reading shaped my dreams, and more reading helped me make my dreams come true.

– [I would like to be remembered as] someone who used whatever talent she had to do her work to the very best of her ability. And to help repair tears in her society, to make things a little better through the use of whatever ability she has.

All images are subject to copyright.