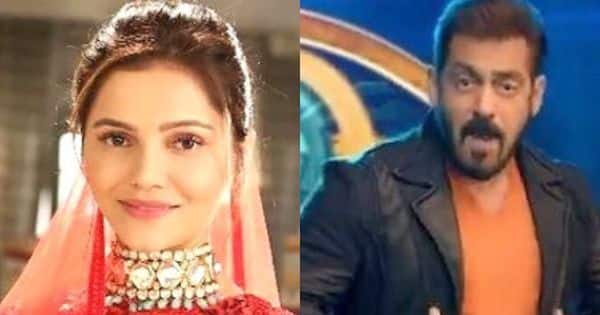 Bigg Boss 15 is the most awaited reality show right now. Ever since Bigg Boss 14 ended, fans were waiting to know details about the new season. On the finale night of Bigg Boss 14, it was announced that the house will open for commoners again in the new season. Rubina Dilaik won Bigg Boss 14 and post that we saw her returning to her show Shakti Astitva Ke Ehsaas Ki. However, as per reports in Spotboye, Rubina Dilaik’s Shakti Astitva Ke Ehsaas Ki finally end soon. Yes, reports say that the show along with Udaariyan which was launched recently is under the scanner. Both the shows will make way for Salman Khan’s reality show Bigg Boss 15. Also Read – 5 times newlyweds Rahul Vaidya and Disha Parmar left us gushing with their PDA – view pics

Talking about Bigg Boss 15, the show will go online this time. The season will be premiering on Voot Select. So far, we have seen that the show opens with a grand premiere on TV. Since two years, the contestants are staying inside for a longer time. Fans remember how the show got extended by a month in Bigg Boss 13. This time, the top brass of Viacom 18 have decided to make full use of their TV and online reach to make it a huge success. Yesterday, Salman Khan finally treated his fans with the first promo of his upcoming controversial reality TV show, Bigg Boss. This season, the show will first stream on digital platform VOOT with Bigg Boss OTT, six weeks ahead of its television run. Also Read – Devoleena Bhattacharjee’s gorgeous pics from a flower market gets hearts from Vishal Aditya Singh — view pics

In the promo, Salman can be seen bursting with joy has he declares and warns the audience to gear up for the upcoming season. He is heard saying, “Is baar ka Bigg Boss, itna crazy, itna over-the-top, TV par ban ho jayega..” “It’s great that this season of Bigg Boss will have a digital first with ‘Bigg Boss OTT’, six weeks ahead of television. The platform will see unparalleled interactivity where the audience will not only get entertained but also participate, engage, give tasks and more – It is truly for the people and by the people,” Salman said. Also Read – Khatron Ke Khiladi 11 premiere: From Shweta Tiwari kissing a chameleon to Divyanka Tripathi taking blessing from a giant lizard – here’s all that went down

What’s at Stake in the Fight Over Voting Rights

The Guardian view on political trust: voters put store by it, the PM does...