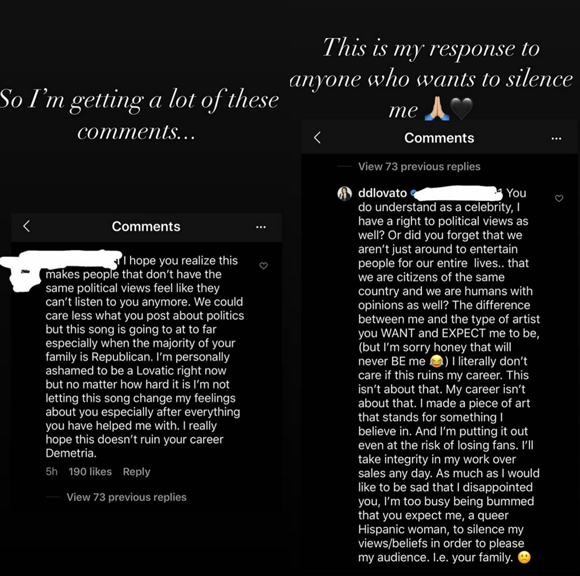 Demi Lovato‘s got an important message, so listen up!

Just like countless other stars who’ve stepped up politically ahead of the upcoming general election on November 3, the 28-year-old is using her powerhouse voice to take aim at Donald Trump‘s trainwreck of a presidency and encouraging people to vote in her latest single aptly titled, Commander In Chief.

The three-minute ballad might be one of the most beautiful sounding diss tracks we’ve ever heard! Using sultry vocals and melodic riffs, Lovato delivers a stern, direct message to POTUS and questions his leadership on behalf of the American people.

One of her powerful lyrics reads:

“Were you ever taught when you were young / If you mess with things selfishly, they’re bound to come undone? / I’m not the only one that’s been affected and resented every story you’ve spun.”

Preach, gurl! DJT has done nothing but fan the flames of “fake news” while spewing his own misinformation about the election, the coronavirus pandemic response, and more. We cannot endure another four years of this and it obviously sounds like Demi is on board with selecting someone much better for the job.

Listen to the song (below)!

While a majority of fans seem to appreciate the track, there were several critics who trolled her Instagram page with attempts to “silence” her political and artistic expression — but the Sorry singer quickly put them in their place in a series of messages to her IG story!

“You do understand as a celebrity, I have a right to political views as well? Or did you forget that we aren’t just around to entertain people for our entire lives.. that we are citizens of the same country and we are humans with opinions as well? The difference between me and the type of artist you WANT and EXPECT me to be, (but I’m sorry honey that will never BE me) I literally don’t care if this ruins my career. This isn’t about that. My career isn’t about that.”

“I made a piece of art that sstands for something I believe in. And I’m putting it out even at the risk of losing fans. I’ll take integrity in my work over sales any day. As much as I would like to be sad that I disappointed you, I’m too busy being bummed that you expect me, a queer Hispanic woman, to silence my views/beliefs in order to please my audience. I.e. your family.”

Perezcious readers, are U feeling the new song? Do U think she went too far or did she hit the nail right on the head and Trump supporters are just being salty about it? Sound OFF with your reactions in the comments!