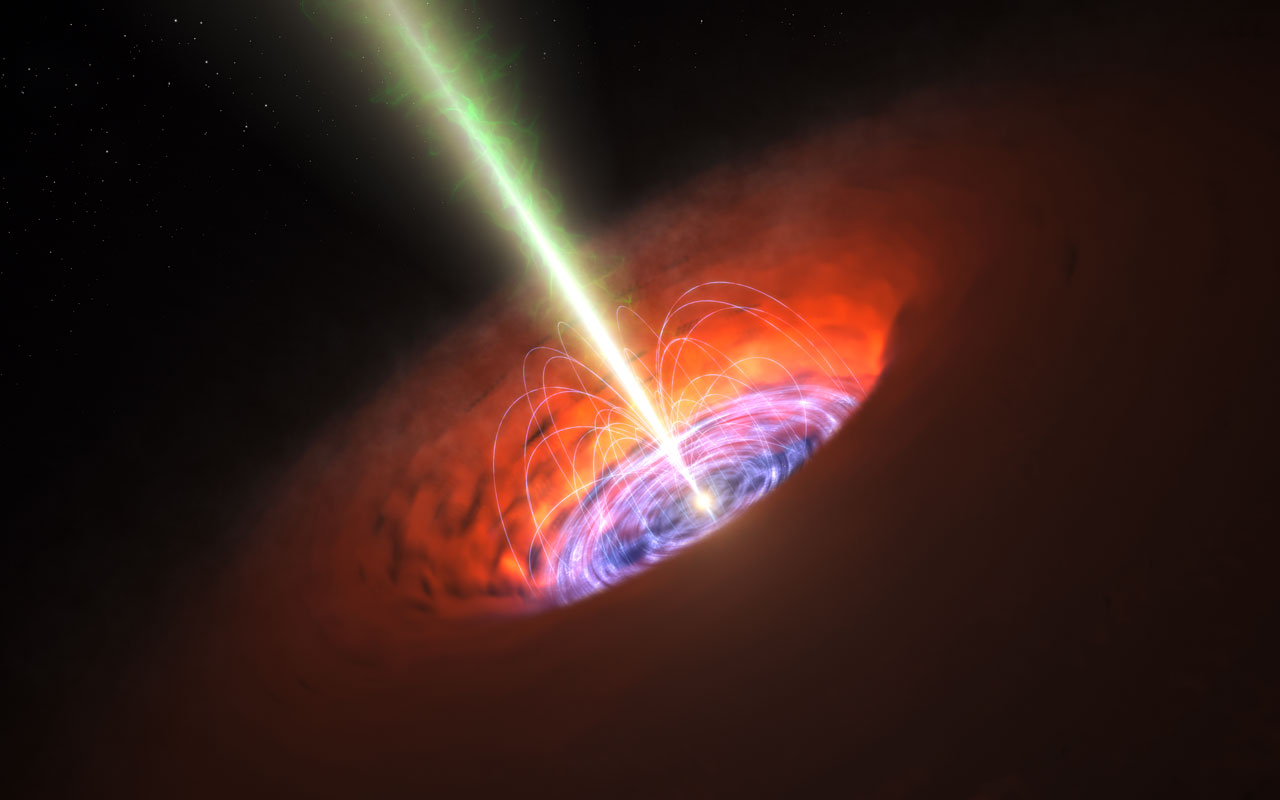 How big might black holes get? A team of scientists now suggests black holes could reach what they call “stupendously large” sizes, each harboring the mass of 100 billion suns or more.

Discovering such gargantuan black holes may shed light on the nature of a significant fraction of the mysterious dark matter that makes up four-fifths of the matter in the universe, the researchers said.

At the centers of most, if not all, galaxies are supermassive black holes with masses that are millions to billions of times that of Earth’s sun. For instance, at the heart of our Milky Way galaxy lies Sagittarius A*, which is about 4.5 million solar masses in size.

Currently the largest known black hole, powering the quasar TON 618, has a mass of 66 billion solar masses. TON 618’s enormous bulk led scientists to speculate whether or not even larger black holes exist, and if there is any upper limit to their sizes.

Related: The strangest black holes in the universe

“It’s surprising that little attention has been paid to the possible existence of stupendously massive black holes until now, because they could exist in principle,” study co-author Florian Kühnel, a theoretical cosmologist at Ludwig Maximilian University in Munich, told Space.com.

A key question when it comes to stupendously large black holes is whether they could form in the first place. However, much remains uncertain about how even regular supermassive black holes are born.

The conventional assumption is that the supermassive black holes at the hearts of galaxies formed as smaller black holes merged and gobbled up matter around them. However, previous research found this model faced challenges when it comes to explaining how black holes could have reached supermassive sizes when the universe was only a few billion years old, study co-author Bernard Carr, a theoretical cosmologist at Queen Mary University of London, told Space.com.

Another way to explain how both regular supermassive black holes and possibly stupendously large black holes formed hinges on so-called primordial black holes, Carr explained. Prior work speculated that within a second after the Big Bang, random fluctuations of density in the hot, rapidly expanding newborn universe might have concentrated pockets of matter enough for them to collapse into black holes. These primordial black holes could have served as seeds for larger black holes to form later on.

If primordial black holes do exist, they might help explain what dark matter is. Although dark matter is thought to make up most of the matter in the universe, scientists don’t know what this strange stuff is made of, as researchers still have not seen it; it can currently be studied only through its gravitational effects on normal matter. The nature of dark matter is currently one of the greatest mysteries in science.

“There has been a lot of interest in whether primordial black holes of modest mass could provide the dark matter,” study co-author Luca Visinelli, a particle astrophysicist at the University of Amsterdam, told Space.com.

Another way to detect stupendously large black holes is through the effects they would have on their environment, such as gravitationally distorting galaxies. These black holes could also generate heat, light and other radiation as they consume matter that astronomers could detect.

Aside from primordial black holes, another potential candidate for dark matter are so-called weakly interacting massive particles (WIMPs). If WIMPs exist, they would be invisible and largely intangible, but previous research suggested that if two WIMPs ever collided, they would annihilate one another and generate gamma rays, providing a way for scientists to spot them indirectly. The powerful gravitational pulls of stupendously large black holes would gather a halo of WIMPs around them, and the high-energy gamma rays that could result from WIMP annihilation might help scientists discover stupendously large black holes, Visinelli said.

All in all, “we know that black holes exist over a vast range of masses, so it’s natural to ask if there is any natural upper limit,” Carr said. “Some people may be skeptical about the existence of SLABs on the grounds that they would be hard to form. However, people were also skeptical about intermediate-mass and supermassive black holes until they were found. We do not know if SLABs exist, but we hope our paper will motivate discussion among the community.”

The scientists detailed their findings online Aug. 18 on the preprint database arXiv and submitted the study for formal peer review.