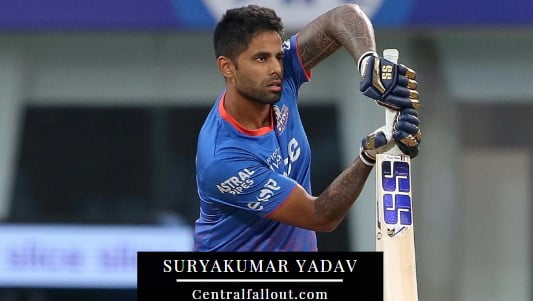 Suryakumar Yadav is a right-handed batsman who plays for the Indian national team and the Mumbai cricket team in local games. Suryakumar also plays for the Mumbai Indians in the IPL, and his time with the team is credited with propelling him to international prominence.

Here we are going to discuss about Suryakumar Yadav bio, Career, Family, height, weight, net worth and stats. To get all new updates follow Centralfallout.com

Suryakumar has been interested in cricket and badminton since he was a child. His father, Ashok Kumar Yadav, wanted his son to concentrate on one sport and seek a career in it. When he was ten years old, his family relocated from Varanasi to Mumbai.

Ashok enrolled Suryakumar in a cricket programme in BARC colony in Chembur after seeing he had the abilities and talent for the game. At the age of 12, he enrolled at the Elf Vengsarkar academy, where he was mentored by former Indian great Dilip Vengsarkar.

Suryakumar received his education at Pillai College of Arts, Commerce, and Science. In 2011, he was awarded the MA Chidambaram Trophy for the best Under-22 cricketer of the year. In seven matches, he scored 721 runs at an average of 80.11, including four fifties and a couple of centuries.

The cricketer enjoys tattoos and has multiple motifs and figures inked on various regions of his body, including a portrait of his parents on his right shoulder.

Suryakumar made his List-A debut for his home state of Mumbai against Gujarat on February 11, 2010. He scored 41 points in 37 balls and was the match’s second highest scorer. A few months later, he made his T20 debut for Mumbai against Hyderabad in the Syed Mushtaq Ali Trophy. He was dismissed with a score of 5, and the side went down by 7 wickets

This young man was given another chance at the end of 2010 when he made his first-class debut against Delhi. Surya was certainly not in the mood to share the spotlight this time, as he scored a thundering 73, the highest of the match. Surya dominated Mumbai’s run charts in 2011-12 Ranji season, accumulating 754 runs in 9 matches at an average of 68.54 after a thrilling debut. In only his third match of the season, he smashed a double-century against Orissa and backed it up with another century in the following. He also had a tremendous 1000+ run season at the U23 level in 2011-12, winning the MA Chidambaram Trophy.

A week before the start of the 2019-20 season, the Mumbai star batter reinstalled as team captain. The decision shocking given that the flashy hitter had been dropped from the team the previous season.
He smashed 94 against Karnataka in a Syed Mushtaq Ali Trophy Group B Super League match that Mumbai won by seven wickets. Suryakumar appointed captain of Mumbai for the 2020-21 Syed Mushtaq Ali Trophy.

Yadav’s talent impressed the Mumbai Indians, who signed him to an IPL contract in 2012. Despite this, he largely overlooked throughout the season due to the presence of seasoned players such as Sachin Tendulkar, Rohit Sharma, and Kieron Pollard.

Kolkata Knight Riders (KKR) paid INR 70 lakhs for the Mumbai player in the 2014 IPL auction. He was a member of the franchise’s championship team, scoring 164 runs in his rookie season.

In IPL 2015, he made waves when he smashed a match-winning 20-ball 46 against Mumbai Indians, overshadowing Rohit Sharma’s immaculate 98. In the 2018 IPL mega auction, he returned to the Mumbai Indians.

Suryakumar was exceptional in the IPL 2020, scoring 480 runs at 40 and striking at 145.01. He was MI’s second-highest run-scorer after Quinton de Kock as they won back-to-back IPL titles.

Suryakumar retained by the Mumbai Indians as their fourth-choice player ahead of the IPL 2022 mega auction. He scored 303 runs in eight matches at a strike rate of 145.67 before suffering an injury and being declared out for the rest of the season.

Suryakumar received his due recognition and opportunity to play for the senior Indian men’s side after nearly a decade of toiling in domestic cricket and the IPL. The Mumbai-born hitter made his international debut against England in a T20I match on March 14, 2021 in Ahmedabad. Suryakumar, on the other hand, did not bat on his debut but made 57 in his first T20I innings in the fourth T20I match.

Suryakumar hasn’t looked back since and has advanced by leaps and bounds. He was a member of India’s T20 World Cup squad in 2021, where he played four games and scored 42 runs in three innings. India assigned a massive target of 216 to chase during the last T20I encounter in Nottingham in order to defeat England 3-0. While India’s top batting order fell early in the chase, Suryakumar’s fireworks raised optimism.

He took the assault to the England bowlers and played his strikes with such grace that he made batting look easy. During his 55-ball 117, Suryakumar hit 14 boundaries and six sixes, keeping England at bay until the penultimate over, when Moeen Ali removed the fiery Indian batter. Suryakumar retained his spot in India’s T20 World Cup squad because to good performances in bilateral series leading up to World T20 2022.

Suryakumar’s father, Ashok Kumar Yadav, made certain that he focused solely on one sport and pursued a career in it. He was ten years old when his family relocated from Varanasi to Mumbai.

He began playing cricket for his school team the same year. Suryakumar initially met his wife Devisha in 2012 at the R.A. Podar College Of Commerce & Economics in Mumbai. His batting impressed Devisha, but Devisha’s dance charmed the Mumbai dasher.

He lives in the Chembur neighbourhood of Mumbai with his wife Devisha Shetty, parents Ashok Kumar Yadav and Swapna Yadav, sister Dinal Yadav, and two dogs named Oreo and Pablo.

Yadav has a net worth of $4 million, which is Rs. 32 crores rupees in Indian currencyre INR. Suryakumar Yadav is a phenomenal cricketer and he plays a very big role in his franchise team. He was also sold at a very high price in 2017 IPL auction.