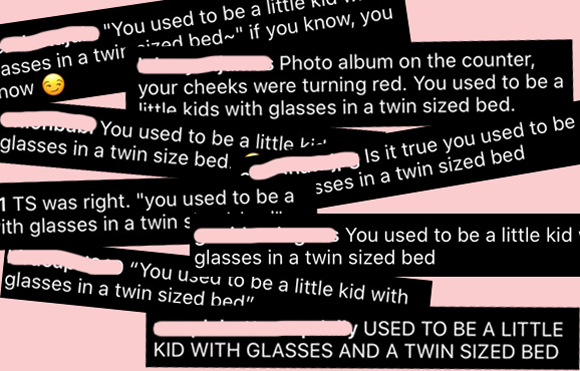 Hell truly hath no fury like a Swiftie scorned.

Jake Gyllenhaal may be known to the world as a renowned actor with a colorful career, but to a certain subset of the population, he will always be the subject of one of Taylor Swift’s best — and most scathing — breakup songs.

No matter how long it’s been (a decade, five other boyfriends, and the full rise and fall of Kaylor), Swifties will always associate the acclaimed actor with the confessional lyrics from All Too Well.

Take, for instance, this Instagram post from the Donnie Darko star on Monday. He posted a very sweet throwback pic to when he was a child wearing big glasses, writing:

“I’ve worn my glasses ever since I parted my hair meticulously with gel (see above), which is why NEW EYES has always been near and dear to my heart. Since 1932, @neweyes_ has provided eyeglasses to people who needed them most. I’m thrilled that they’ve partnered with @theinspireprojectus to create Project Human: Changing the Way We See the World, a speaker series coming to schools and remote learners this fall.
Project Human is designed to spark conversations focusing on unity and equality. It’s an opportunity for students to interact with public figures and do what they do best: Keep ‘em on their toes! For a full line-up of speakers or to bring Project Human to a school near you, visit: http://theinspireproject.us/project-human/”

Except the accompanying photo showed a young Jake in his glasses, which was basically the Bat Signal for Taylor stans with internet access ’round the globe. The comments section was soon flooded with references to the All Too Well lyric:

“Photo album on the counter, your cheeks were turning red/You used to be a little kid with glasses in a twin sized bed”

Actress Rachel Zegler had no sympathy for the Oscar nominee, commenting:

“I’ll be honest mate you set yourself up for this one.”

Poor Jake. Despite the fact that TayTay has been happily settled down with Joe Alwyn for more than three years now, he’ll always be the one who broke her like a promise… at least in the eyes of the Swifties.

And he had to drag his sister into it too: Maggie Gyllenhaal hasn’t been able to escape that scarf allegedly left in a drawer at her house. Back in February 2019, the actress shared photos of her home with Architectural Digest, and Swifties demanded answers.

The Dark Knight star has been dogged by questions of the scarf for years now, including an episode of Watch What Happens Live where host Andy Cohen inquired after its whereabouts. She replied:

“You know, I never understood why everybody asked me about the scarf… I am in the dark about the scarf. It’s totally possible. I don’t know. But I have been asked this before and I’m like, ‘What are you talking about?’”

Seems as though 2020 is a good time to put those All Too Well references to bed. After all, according to her most recent release Folklore, Taylor is now in the habit of sending her exes’ babies presents. So that’s something for Jake to look forward to, at least!