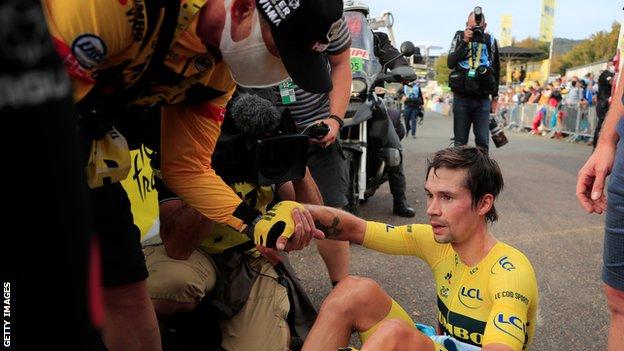 Tadej Pogacar is set to win the Tour de France ahead of strong favourite Primoz Roglic in one of the most dramatic turnarounds in the race’s history.

Pogacar, 21, will be confirmed as the youngest winner for 110 years at the end of Sunday’s largely processional stage to Paris.

The UAE-Team Emirates rider overhauled a 57-second deficit to Roglic, who was thought to be a far stronger rider on Stage 20’s time trial to La Planche des Belles Filles.

It will be a first Grand Tour victory for Slovenian Pogacar, who took the yellow jersey from compatriot Roglic after he had held it for 13 days.

Pogacar is now 59 seconds ahead of Roglic at the end a day of drama reminiscent of the 1989 Tour, when Greg LeMond unexpectedly overhauled Laurent Fignon in a final-day time trial to win by eight seconds.

Richie Porte of Trek-Segafredo will be on the podium in Paris, taking third, three minutes and 30 seconds down.

Pogacar won the stage, 1min 21secs ahead of Roglic’s Jumbo-Visma team-mate Tom Dumoulin. Porte climbed to third overall after finishing in third place on the stage.

Britain’s Adam Yates of Michelton-Scott will finish ninth in the general classification, 9mins 25secs behind the winner.

What happened to Roglic?

Roglic has looked imperious throughout the three-week race thanks to support from his powerful team, supported by some of the sport’s best riders, including Dumoulin, Wout van Aert and Sepp Kuss.

The 36km stage from Lure to La Planche des Belles Filles was a challenging course that finished, unusually for time trial, with a category 1 climb. Roglic, 30, was considered a far better time trailist than Pogacar, and began the stage strongly.

But Roglic hit trouble at the changeover from super-fast specialist time-trial bikes to more a conventional road machine before the climb, struggling to clip into his pedals, wobbling when being pushed away and never seeming to find his typical rhythm.

Roglic, who claimed his first Grand Tour victory at last year’s Vuelta a Espana, looked desperate as he crossed the line, his helmet pushed upwards and slightly lop-sided, knowing already he had lost the race.

Desperation turned to confusion and dejection as he sat on the ground in his full yellow skinsuit, trying to comprehend how he had committed one of modern cycling’s biggest chokes.

From a distant second, Pogacar takes it all

Roglic had been favourite to win the 107th edition of cycling’s greatest race, alongside defending champion Egan Bernal of Ineos Grenadiers.

However, Bernal abandoned the race before Stage 17 following a disastrous climb up the Grand Colombier on Stage 15, where he cracked and lost more than seven minutes to Roglic.

It was one of the biggest downturns in form for a defending champion in recent history, and put an end to Ineos’ record of winning every Tour since 2015, four of which were as Team Sky.

Ineos looked set to have something to celebrate as they tried to seal the polka dot King of the Mountains jersey through their second protected rider Richard Carapaz.

Despite 2019 Giro d’Italia winner Carapaz’s attempts to deliberately ride a slow first section before blasting up the mountain, Pogacar’s epic performance eclipsed him and he took the jersey.

It is the second of three jerseys Pogacar will claim at this year’s race – he will also pick up the young riders’ white jersey.