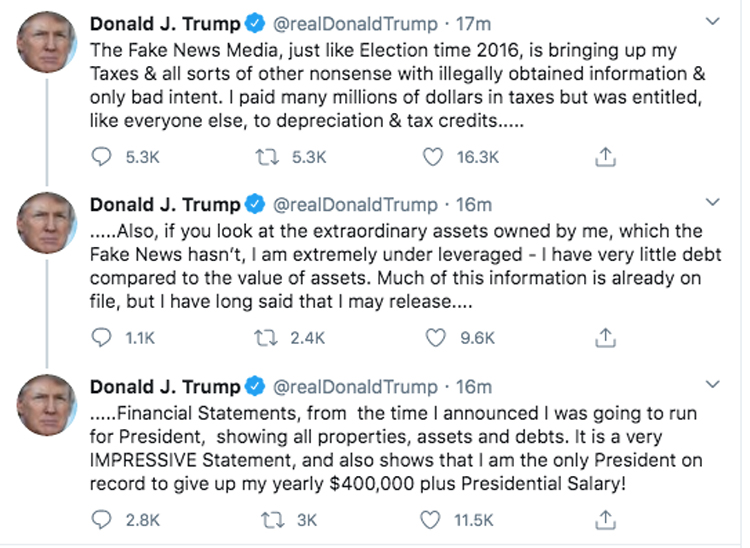 On Sunday, the New York Times published a damning report — the first of what they claim will be several between now and Election Day — regarding President Donald Trump‘s apparent long-standing avoidance from paying federal income taxes.

The Times report went deep on more than two decades of discernible tax information regarding The Donald, his children, and his myriad companies, LLCs, and business involvements. And what the newspaper’s reporting team discovered was far from a pretty picture: years of avoiding income taxes, claims of massive business losses, and apparent struggles to keep his ventures afloat on paper despite boasting about his business acumen in public and on the campaign trail.

Included among the highlights (er, lowlights) from the Times report:

And possibly worst of all… the Times reports Trump appears to hold at least $422 million in loans, all of which are set to come due in the next four years. It’s unclear to whom he owes all that money (like, take a guess…), but that along with a $100 million mortgage bill on Trump Tower due in 2022 combine to make him a remarkably leveraged individual and a MAJOR national security risk as head of our government.

Just as you’d expect, Trump and his team have been denying and decrying the Times’ reporting, calling it “fake news” and claiming the facts are wrong — all without offering any concrete evidence to the contrary. The embattled President has already tried to walk back the report, too, as you can see (below):

And on Monday morning, he published a tweet thread further denying the report and railing against the “Fake News Media” for covering it:

Here are just a few of the thousands of reactions to Trump’s apparent long-standing tax issues:

“You paid $750 in taxes, and likely committed tax and bank fraud. You know you are going to prison if you don’t get re-elected and so does Don Jr., Ivanka, and Eric.”

“There are only two truthful possibilities for Trump: He’s either a terrible businessman, or a tax fraud. He should tell us which narrative he wants us to believe. I’ll wait.”

“No American should have to pay more in taxes than Donald Trump.”

“You might be in a cult if you are cool paying your fair share of taxes while Donald Trump didn’t pay his.”

That last one… GENIUS!!! What do U make of this whole mess, Perezcious readers?! Seriously, no income taxes at all in 10 of the last 15 years?? Imagine if you tried to pull that stunt with the IRS! What a s**t show!!!

Sound OFF about it with your take, down in the comments (below)… and you can read the full Times report HERE.