It has been a bit of struggle knowing what to do with the minimum 40 per cent that the FT fund has to keep in cash and bonds.

It is a balanced fund where bonds are meant to protect some of the value should share prices have one of their nasty bear phases.

This year it has seemed likely bond prices would fall and longer term interest rates would rise from the exceptionally low levels they hit at the height of the pandemic crisis.

I have therefore been running the fund with no conventional bonds from a developed country to avoid the losses that rising rates and inflation fears could bring. I have also kept cash levels high – at 17 per cent of the fund.

Last year, bonds were buoyed by a wall of created money from the US Federal Reserve and other leading central banks keen to turn the markets positive and provide plenty of support to pandemic-hit economies.

Now, sentiment seems to have turned and we could see growing worries about US inflation and about the large new American bond issue programme that could hit bond prices further.

This year so far an investor would have lost 7 per cent in 10-year US Treasuries. I have run a large holding in short-dated US inflation-linked government bonds, hedged back into sterling. These have remained fairly stable. I was expecting inflation to become a US talking point given the huge monetary stimulus being administered.

A little bit of inflation is a good thing. Central banks think so, and target a rise of 2 per cent a year rather than trying to keep price increases down to zero. Many share investors think so, favouring a bit of pricing power for successful companies. It is easier to increase profits with a bit of inflation in the air.

But too much inflation is a bad thing. It means the central banks have to increase interest rates and slow economies to stop price increases getting out of control. They need to avoid hyperinflation, which strips the shelves of products, renders money worthless and does grave damage to normal commerce.

If inflation starts to rise too far too fast then rising yields on conventional government bonds will cause strains on inflation bonds as well. While the holders of an index-linked bond will receive some benefit from the protection of the income and capital repayment value for inflation, they will also see downwards pressure on their investment because underlying interest rates are rising. Cash is more attractive as a haven as bond prices fall.

The longer the index-linked bond you hold, the more exposure there is to losses from rising interest rates. This has happened a bit already on the index-linked gilts in the fund even though the UK has not pursued nearly so aggressive a reflation policy as the US. 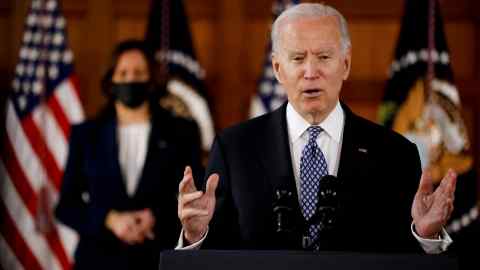 Investors in the US markets, which tend to lead the main markets of the advanced world, have been agonising over how much inflation is likely to come and what this will do to bond prices and the level of interest rates.

So far this year, investors have driven the yield on the Treasury 10-year bond up from 0.9 per cent to 1.75 per cent, even though the Federal Reserve has resolutely kept short-term rates near zero and made clear it has no plans to raise them this year or next.

As investors come to anticipate a bit more inflation, so they expect a higher running income on a longer-term bond to offset some of their losses from inflation over the years ahead.

They also anticipate the central bank wanting to increase interest rates generally to slow activity. Markets have been testing out the Fed to see where it might worry that longer rates had gone up too much and buy more bonds. So far the Fed has shown it is relaxed about a rise in longer term yields, encouraging the markets to push them higher.

The US authorities today are determined to run the economy hot. President Joe Biden and the central bank want to maximise the stimulus and allow plenty of money to circulate in the system. They are in a hurry to get gross domestic product back to pre-pandemic levels and to move as quickly as possible to full employment.

The US has a treble stimulus. It has created more money than the euro area and the UK with money growth running almost twice as fast. It has had a much larger special 2021 stimulus pandemic package — 9 per cent of GDP — than any in Europe, and is spending and borrowing more to get money into the economy.

It now plans to do more of the same with a large new infrastructure programme. American officials are likely to succeed in giving the US stronger growth earlier than Europe. They may also generate a bit more inflation. The Fed thinks there is sufficient slack in the economy to keep wages down, whilst accepting this year there will be some commodity and product price rises as individual shortages occur and as items recover from the depressed pricing levels of lockdown and low demand.

The magnitude of the US stimulus is unprecedented and far larger than others around the world. The Fed may be complacent about inflation. The US government has just sent $1,400 to most adults to encourage them to go out and spend, while the banking system has plenty of money to offer people more credit.

For the time being the fund is positioned with many others to receive some more benefit from the expectations of a good recovery and from the better profits and dividend figures to come later this year. A stronger US will stimulate the rest of the world.

The fund has taken profits on Nasdaq and put more into a general world recovery through the world index, which worked well. It has also reduced the clean energy position after a great run. Too much investor money in the sector was stretching valuations too high.

We may need to be fleet of foot and perhaps resort to the option to reduce the share position if worries of monetary tightening grow stronger.

The first quarter has produced modest positive returns for world shares. There was a retreat from early highs due to the falls in bond prices and some worries over how long the Fed can sustain the easy money policy.

The second quarter will see the drama play out, as solid evidence of the visible recovery against the lamentable numbers for last year is contrasted with concerns about how long the super stimulus can last. So the fund continues with its share-oriented strategy for the time being.

But we may need to be fleet of foot and perhaps resort to the option to reduce the share position if worries of monetary tightening grow stronger.

It does not seem to be the right time to buy back conventional bonds for the portion of the portfolio that can hold them. There could be more price falls before the Fed decides to use its firepower to stop the rise in yields. Meanwhile, there will be no shortage of supply of US bonds as the government continues with its vast spending programme.

Sir John Redwood is chief global strategist for Charles Stanley. The FT Fund is a dummy portfolio intended to demonstrate how investors can use a wide range of ETFs to gain exposure to global stock markets while keeping down the costs of investing. john.redwood@ft.com