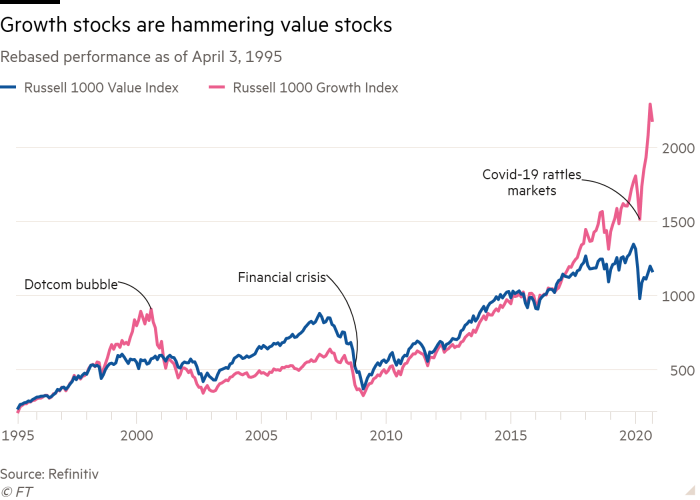 In the 1985 film Brewster’s Millions, Richard Pryor plays a minor-league baseball pitcher who struggles to waste $30m in 30 days. If the cult comedy were set today, a certain investment strategy might provide a quick way to torch the money.

Such grousing is increasingly common among investors whose style is to buy value stocks — unloved and cheap companies in often unfashionable industries — after a dismal decade of underperformance. But in 2020, value investing has gone from poor to pathetic. This week, it claimed a big victim.

AJO Partners, a $10bn value-focused hedge fund, on Wednesday announced it would shut down and return its money to clients, blaming the decision on the length and depth of the value downturn.

“The drought in value — the longest on record — is at the heart of our challenge,” Ted Aronson, AJO’s founder, wrote in his final letter to investors. “We still believe there is a future for value investing; sadly, the future is unlikely to arrive fast enough — for us.”

For value investors, a bout of underperformance is nothing new. Many ruefully recall how dismally they did during the dotcom bubble, only to roar back when it burst. The Nobel laureate economist Eugene Fama has shown how value stocks have over time rewarded investors since at least the 1920s.

However, the end of a pedigreed investment group — AJO was founded in 1984 and managed over $30bn at its peak in 2007 — underscores just how brutal the market environment has been lately.

“We have read plenty of value factor obituaries over the decades, but let’s be clear: value performance is bad, the worst it has been in 100 years,” Andrew Lapthorne, head of quantitative research at Société Générale, wrote in a note this week. “It is important to try to understand what’s gone wrong.”

Unfortunately, the conclusions of analysts are largely as muddled as the performance of value itself.

SocGen reckons the root cause is that cheap stocks are now staying cheap — or becoming even cheaper — because they tend to be found in more economically sensitive sectors, and broadly speaking global growth has been anaemic since the financial crisis of 2008. Meanwhile, sagging bond yields are pushing investors into expensive, faster-growing stocks in sectors like technology.

The Russell 1000 growth index is up almost 30 per cent this year, while the Russell 1000 value index is still nursing a 10 per cent loss in 2020. Over the past decade, US growth stocks have now climbed more than 300 per cent — three times the returns of value stocks.

Others blame outdated ways of measuring what is cheap. Historically, the main way of doing this has been to compare stock prices to a company’s book value, a measure of its assets minus its liabilities. However, this metric does not include intangible assets — such as brands and intellectual property — which these days often make up more of a company’s worth than hard assets like factories.

Just as home buyers factor in the quality of local schools, investors should take more ephemeral but important aspects into account, argues a paper from Research Affiliates. It calculates that by incorporating intangible assets, much of the decade-long value underperformance disappears. However, Savina Rizova, head of research at Dimensional Fund Advisors, has found the opposite: intangible assets are hard to value accurately, and the noise they introduce is actually unhelpful.

Meanwhile, AQR has kicked the tyres on a wide variety of explanations — such as a secular tech stock bull market, intangible assets or the emergence of a handful of dominant “megacaps” — and found that even after accounting for those, the underperformance of value is still historically extreme. The central reason is simply investors paying more for stocks they love and shunning to an unprecedented degree those that they hate. As a result, the “mispricings are real, clear and gigantic”, Mr Asness notes.

Abhay Deshpande of Centerstone Investors is optimistic that a durable renaissance is inevitable at some point. History shows that the more pain value investors suffer, the stronger the comeback is. “The good news is that the dream is only deferred,” he said. “Crowds go crazy as a group and individually regain their sanity.”

Some might even take the AJO closure as a sign that a revival for the strategy is nigh, as was the case in 1999-2000, when many big value managers also capitulated.

“Ghoulishly, everyone throwing in the towel is often a good sign, especially when solid people like Ted are doing it, it’s an indication of stress. But I don’t want to oversell it as a timing indicator,” said Mr Asness. “I’m not sitting here raising my value tilt, just because one of my heroes threw in the towel. I’m just sad about it.”