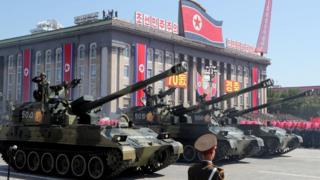 North Korea is preparing for what is expected to be the largest military parade in its history. Thousands of soldiers have practised for months to ensure that each step is marched with precision and each fervent cry of adoration will be heard by the Supreme Leader Kim Jong-un.

These events are often ostentatious formal displays of military might to show a devoted people paying homage to their leader in closely directed goose-stepping drills. Mistakes are not tolerated.

But these parades can also be part provocation. A chance to show off new missiles and weaponry despite being under strict economic sanctions.

The state has not featured any ballistic missiles in its parades since Donald Trump and Kim Jong-un held their first summit in 2018.

Talks between the two sides broke down in Hanoi last February without a deal and North Korea has continued to test a number of new short range ballistic missiles.

This event, on 10 October, to mark the 75th anniversary of the founding of the Workers’ Party comes just weeks before the US presidential election. So is North Korea going to use it to make a point and prove that it still has weapons capable of striking the United States?

It’s certainly going to be big, according to the editor-in-chief of the Daily NK, a Seoul-based website with paid sources in the North.

Lee Sang Yong told me that as early as March, Pyongyang had ordered its military to mobilise 32,000 soldiers. It’s become so large that the site where soldiers practise has had to be expanded.

“The Pyongyang Mirim airport now has two new roads and 10 new buildings. Therefore, I think it is likely that we will see Intercontinental Ballistic Missiles [ICBMs] or Submarine Launched Ballistic Missiles [SLBMs] on display at the parade this time,” he said.

“Also, 600 students and researchers from Kim Il-sung University will also take part. This is not an insignificant number. This university is where they develop new talent for missile development. By bringing them to the parade or putting them on display, North Korea may be trying to install pride and respect for the missile development talents.”

Jeongmin Kim, an analyst with NK News, said North Korea does not always use these events to prove a point to the outside world.

“We have to remember that many times – for a hereditary dictatorship especially – they constantly have to prove legitimacy to rule to their domestic audience.

“So 10 October will also aim to do exactly that: trying to show its people, with dazzling parades with uplifting propaganda slogans, that they are ‘doing okay’, despite all of what has been going on this year.

“Of course, precedents do point to the possibility of Kim Jong-un or other high-level officials making a speech that may involve some message aimed at the outside world, such as how they are not waiting around for sanctions relief any more and will focus on ‘self-reliance’.”

Cut off more than ever

While some will be watching for any new missiles on display, there is growing concern about the welfare of the 25 million North Korean people.

2020 has been a bad year for most countries, but for North Korea it has the potential to be devastating.

“I hear there is a surge in the number of orphans and homeless street kids in the North this year,” said Lee Sang Yong.

“Even though we cannot even imagine it here in South Korea – there are people in the North who are dying and starving.”

The state closed its borders to the outside world in January to prevent an outbreak of Covid 19 spreading from neighbouring China.

Authorities have reportedly issued “shoot-to-kill” orders along the border and created a buffer zone to stop anyone entering the country.

Diplomatic sources told me earlier this year that stockpiles of PPE and other essential medical supplies, including vaccines, had built up at the border with China, unable to get through.

North Korea claims to have had no cases of Covid-19, but Kim Jong-un continues to hold high-level meetings to ensure tight restrictions remain in place.

The North Korean people are now cut off from the outside world more than ever before. Even movement between provinces has been limited.

“Land, sea, and air. It’s a complete shutdown of both people and material,” said Mr Lee.

“Unless you are military personnel or a high-ranking officer, no one is moving inside of North Korea. Quarantine measures against Covid-19 are so tight.

“The North Korean economy has come to a halt. Smugglers and small traders at the border have questioned why the regime is risking the fate of the economy if there is no Covid-19 in the country.”

Trade with its key ally China has plummeted by nearly 70% in the first eight months of this year, as compared to last year.

The impoverished state has also been battered by extreme weather in recent months and Korean state television spends its afternoons showing “heroic” efforts to overcome the damage from several typhoons.

Kim Jong-un has now ordered a nationwide drive to try to boost the ailing economy, describing it as an “80-day battle”.

In short, that means more work for the North Korean people, extra hours in the fields or factories and additional duties in their towns and villages. The harder they struggle, the more loyal they will seem to local leaders. The message blasted across state TV is one of “self-reliance”.

In the South, farms across the country are busy harvesting rice. But it’s hard to know if this is happening in the North.

It’s difficult to get a clear picture of how badly the state’s harvests have been hit, but with 11 million people in the country thought to be food insecure, even a small number of rain-ravaged fields can amount to thousands going hungry.

A tale of two Koreas

My team travelled to the Demilitarised Zone near Geosong on the east coast.

We drive past white sandy beaches flanked by high barbed wire. Bright blue skies give us a crystal clear view of the mountains to the north. A few checkpoints are visible on the peaks

From here, curious South Koreans love to peer into the North. This is as close as they can get.

Earlier this month an incident in disputed waters to the west of the peninsula saw a South Korean man, thought to have been trying to defect, shot and killed. His body was burned.

And yet the North still has friends here.

Some still harbour hopes of ending the 70-year war even after Donald Trump and Kim Jong-un could not reach a deal on denuclearisation.

Just three years ago, North and South Koreans competed together at the Winter Olympics in Gangwon province and the local governor believes it’s time to look again at these types of exchanges as a path to peace.

“The effort to reach a big deal resulted in no deal. It is time for us to go back to develop non-political initiatives and to achieve small deals in sport and cultural exchanges,” said Choi Moon Soon.

“It is very unfortunate that we are left with the situation that even small exchanges between North and South Korea are cut off by pursuing the political big deal and revealing differences in the process.”

Mr Choi would like to create a United Nations peace zone at the border.

International sanctions mean this is an unlikely dream for now. Instead Mr Choi acknowledged that North Korea is keeping a close eye on the US presidential election to figure out its next move.

“I am not sure if I will see North and South Korea unified in my life time but I have two daughters and I would like it if they didn’t inherit this volatile situation. We live with continuing threat and potential of conflict. We shouldn’t pass down this volatility to our next generation.”

That may be out of his hands and instead fall to whoever wins the White House.

Pyongyang is trying to read the situation inside and outside its country. It’s not yet clear which path it’s willing to take.

Will its current perilous predicament eventually encourage Kim Jong-un back to the negotiating table. Or will he look further inward and keep the borders closed.

The North Korean leader has been unusually quiet this year. This parade is a chance to show his hand and his agenda and put the fate of his country back into the public eye.