How much is a gold medal worth Really Gold? 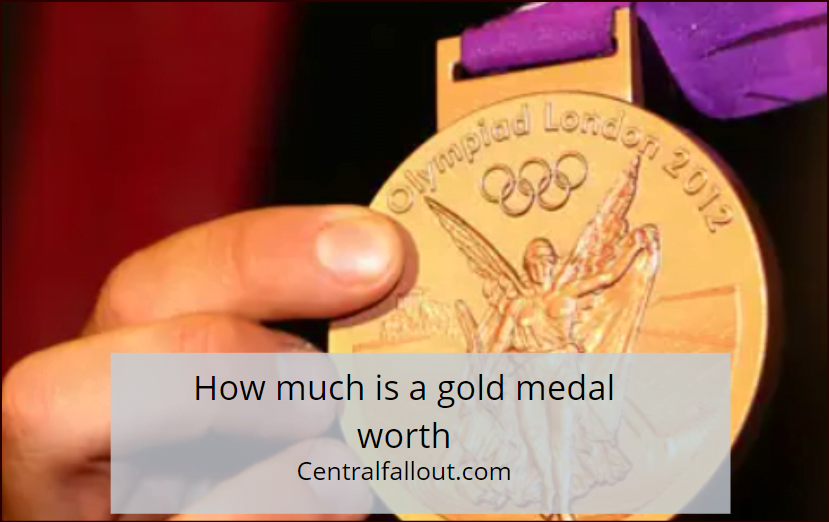 How much is a gold medal worth: When American James Connolly won the triple jump at the first modern Olympic Games in Athens, Greece – the birthplace of the original Olympics on April 6, 1896, he became the first Olympic champion in 1,500 years.

Connolly, on the other hand, did not receive a gold medal. There was no such thing in 1896, according to Guinness World Records. The first gold medals were presented at the 1904 Olympic Games in St.

Louis. Before that, gold was thought to be prohibitively expensive. Instead, the first place winner earned a silver medal, second place received a bronze, and third place received no prize.

So, were the early organisers correct in choosing a less expensive alternative to gold, and are today’s medals made of the actual thing? Yes, to some extent, but it is not the sole reason they are so valuable. Continue reading to find out more.

How much does a gold medal with a gold finish cost

The word “gold medal” is quite deceptive. Gold medals were fashioned of real gold between 1904 and 1912 when the first gold medal was given in St.

Louis. But gold medals lost a lot of numismatic street cred that year during the Stockholm Games in Sweden, when organisers determined that they would be mainly manufactured of silver — at least 92.5 percent — then gilded in 6 ounces of gold plating from then on.

Those proportions haven’t changed since then.

Bronze medals are composed of “red brass,” which is a mixture of 95 percent copper and 5% zinc, both of which are base metals that are significantly less valuable than precious metals like silver and gold, according to The New York Times.

So, how much does a medal cost?

Here’s how the three medals stack up at the weigh-ins, according to Newsweek:

According to The New York Times, former Olympic champions have been known to find themselves in such terrible financial problems that they are compelled to sell the physical manifestation of their life’s most significant achievement – their prized Olympic medals.

Others donate the symbol of their Olympic glory days to charity by auctioning it off.

In any event, eager collectors are on the lookout for Olympic medals to add to their collections. Like baseball cards, comic books, and sports memorabilia, medals are frequently auctioned, acquired, and sold.

That’s when you realise that the value of an Olympic medal exceeds the weight of its constituent metals — and that the more meaningful the Olympic moment, the more money the medal is worth. Here are some interesting facts concerning medals of this type:

• A bronze medal from the 1956 Winter Games in Italy sold for $3,750, even though the pound of copper that makes up 95 percent of the medal isn’t worth five dollars at the current rate.

• An $83,188 medal from the 1984 U.S. Men’s Basketball Team was sold. The medal belonged to an unknown Olympian, however Patrick Ewing was a part of both the original 1992 Dream Team and the 1984 team, which was arguably the best amateur team ever formed.

• A gold medal from the 1936 Olympics sold for $1.5 million, one of four that Jesse Owens won while dunking on Hitler at his own Berlin Games.

Take a look at the imagery on the gold, silver, and bronze medals if you have any doubts about athletic marketing’s branding strength.

According to the New York Times, the IOC mandates that the Olympic rings and the name of that year’s Games and a picture of the Greek goddess of triumph known as Nike be engraved on the medals.